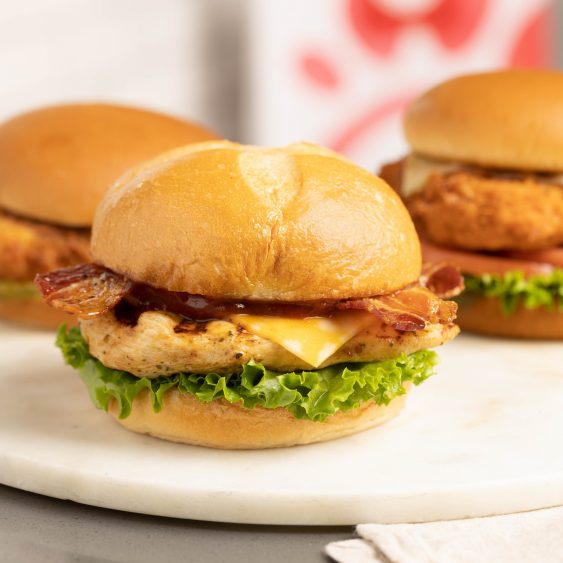 When it Comes to Fast-Food, Chicken Franchises Rule the Roost. Here are 10 Popular Brands to Consider.

Burgers and pizza may have been the go-to fast food at one time, but chicken has taken the lead in the fast-food pecking order. U.S. chicken consumption per capita has increased nearly every year since 1960, while red meat consumption has declined. According to the National Chicken Council, Americans spend more money on chicken than any other food item.

Chicken has become so popular that a trend has emerged in the quick-service restaurant industry. Fast food franchises like McDonald’s, Popeyes, and Chick-fil-A have engaged in the ‘Chicken Wars’ to see which restaurant has the best chicken sandwich in terms of sales and social media chatter.

NBA legend Shaquille O’Neal cashed in on the chicken craze with his chicken franchise, Big Chicken. But is opening a chicken franchise a good investment? If the ‘Chicken Wars’ are any indication, chicken franchises are more than just a cultural phenomenon; they are legitimately profitable businesses with the backing of celebrities and big-time investors. Here are 10 popular chicken franchise brands to consider.

You may think chicken franchises only offer unhealthy, tans fat-laden fried chicken sandwiches and nuggets. But there is a chicken franchise that sells healthier options. Chicken Salad Chick, which was founded in 2008 by Stacy Brown and her husband Kevin in Auburn, Ala., sets itself apart by serving fresh chicken salads along with sandwiches, soups, and desserts. Since the chicken franchise doesn’t serve fried chicken, prospective franchise owners don’t need to invest in fryers. About 80 percent of the brand’s locations are franchised, and it is continuing to grow with more than 200 locations in 17 states. The initial investment for a non-drive-thru location ranges between $742,300 to $950,300. For a location with a drive-thru, the initial investment is $762,300 – $980,300.

As one of the most recognizable franchises in the world, KFC is a leader in the fast-food industry and sells more than 60 million buckets of chicken annually. Customers can’t get enough of the brand’s fried chicken, chicken sandwiches, chicken tenders, and great deals, like their $20 and $30 Fill Ups. KFC’s marketing campaigns are so ubiquitous that about 185 million people see a KFC commercial every week. It supports all of its franchisees and has programs like EmpowHer, its Women in Franchising Conference. Franchisees can learn from the brand’s founder, Colonel Harland Sanders, who overcame difficult times and found success later on in life.

Chick-fil-A is recognized as a top chicken brand with high customer satisfaction and is considered a great place to work. In addition to its popular chicken sandwiches, Chick-fil-A also offers chicken nuggets, waffle fries, lemonade, and more. Its locations have been closed on Sundays since 1946 because its founder, Truett Cathy, believes in setting aside one day a week for rest and religious observance. The faith-based brand is also known for its humorous marketing campaign of a cow telling people to ‘Eat Mor Chikin.’ With more than 2,800 locations across the U.S. and growing, Chick-fil-A is also expanding in Puerto Rico and Canada. While it is difficult to be awarded a location with the fast-food giant, ideal candidates are committed to the community and provide great customer service.

Wingstop is a chain of nostalgic, aviation-themed restaurants that specializes in chicken wings. All wings from the chicken franchise are made to order and served with a variety of house-made sides, including french fries. With more than 1,600 locations worldwide, Wingstop is looking for passionate prospective franchise owners with ambitions to own multiple units. Wingstop’s 80% off-premise business allows for franchisees to have a small restaurant footprint that ranges from 1,200 to 1,800 square feet. Additionally, you’ll enjoy low labor costs and a simple business model. Veterans are incentivized to invest in Wingstop with $15,000 off of their initial franchise fee. Wingstop is a proud member of the International Franchise Association’s VetFran Program.

The Bojangles franchise offers customers a menu of chicken sandwiches, biscuit meals for all-day breakfast, family meals, and more. Founded by Jack Fulk and Richard Thomas in Charlotte, N.C., in 1977, the chicken franchise has expanded to more than 760 locations throughout 14 states. Locations are available in the Southeast, Midwest, and Atlantic coast regions of the U.S. Franchisees enjoy unique format options in both traditional and non-traditional locations. Bojangles is looking for franchise owners with business experience and a net worth of $1 million.

Popeyes is known for its incredibly popular fried chicken sandwich, which came out in August 2019. The sandwich became so popular and garnered so much attention on social media that it is often credited with starting the ‘Chicken Wars.’ The company maintains a “Hall of Fame” of its franchise holders and has international locations in Germany, France, and Japan, that are located only on U.S. military installations. The chicken franchise has over 2,700 locations in North America. Popeyes is part of the Restaurant Brands International (RBI) family of legacy fast-food franchises along with Burger King and Tim Hortons. RBI is a reputable umbrella franchisor.

The Zaxby’s chicken franchise offers chicken wings, chicken fingers, sandwiches, and salads. The company has taken a slow and steady approach to expansion, first with a few locations in Georgia and then neighboring states once word about the franchise got around. Most locations are concentrated in the southeast of the U.S. Franchise owners can meet with each other at the brand’s annual conference. The initial franchise fee is $35,000, and the initial investment ranges from $351,000 – $718,500.

Church’s Chicken offers customers a menu of fried chicken, french fries and jalapeños, coleslaw, biscuits, mashed potatoes, and fried okra. The chicken franchise has launched prototypes as part of its new brand image that is contemporary and dynamic while keeping its Texas roots. Church’s Chicken also strives to make the community a better place and has partnered with No Kid Hungry since 2016. The chicken franchise is looking for investors with at least five years of restaurant operations experience and a net worth of $2 million.

This chicken franchise – which is also referred to as Harold’s Chicken, The Fried Chicken King, or Harold’s – was founded in 1950 by entrepreneur Harold Pierce. Pierce was born in Alabama and moved to Chicago in 1943, where he worked as a chauffeur. By 1950, Pierce ran a small restaurant with his wife, Hilda. The restaurant, which specialized in chicken feet and dumplings, inspired him to adapt its recipe to fried chicken; thus, Harold’s Chicken Shack was born. Not only is Harold’s a staple of Chicago, but the chicken franchise has expanded across the U.S. Harold’s Chicken is known for its chicken and fish. Franchise owners are provided with marketing support to help develop the brand. This includes marketing and advertising campaigns on social media, radio, and mass mailing. Depending on the area, it is estimated to take six to nine months to open a location.

Chester’s has a menu offering chicken tenders, sandwiches, biscuits, and more. Founded in 1952 by W.O. Giles, Chester’s has been franchising since 2004 and has transformed itself from a donut shop to a chicken shop. Like many franchise brands, Chester’s is a family affair. Giles’ son, Ted, joined the business as a second-generation CEO and helped grow Chester’s on three continents. In 2017, Ted’s son, Wynn, succeeded him and represented the third generation of Giles family leadership at Chester’s. Franchisees with Chester’s have found success with “restaurant-in-store” location options. The chicken brand can also be found in colleges, universities, airports, convenience stores, and travel stops. Chester’s is now redesigning its locations to correspond to its fresh, never frozen fried chicken. Franchisees enjoy not being charged royalty fees, and the chicken franchise has more than 1,200 locations.