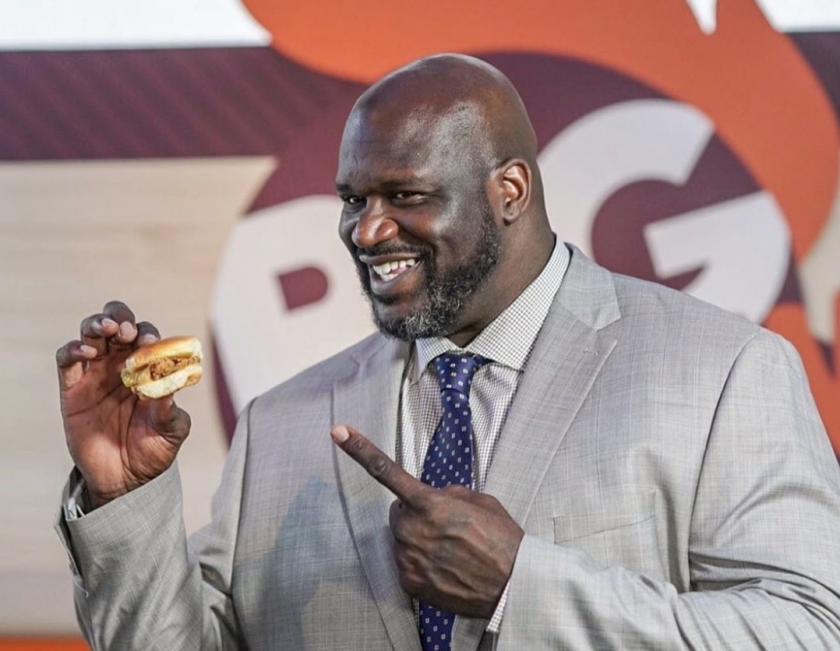 Big Chicken is about to become a big deal, says former NBA great Shaquille O’Neal, a majority partner in the sandwich restaurant. The Las Vegas-based company has standalone restaurants and also has one site – so far – operating in a Walmart (with more planned in the U.S. and Canada); Big Chicken also feeds guests on Carnival’s Mardi Gras cruise ship, nrn.com has reported. And now the company will franchise on a major scale, wooing multi-unit investors with restaurant development operating experience, according to the report.

CEO Josh Halpern told nrn.com the company already is on tap to open restaurants in sports arenas, including the Climate Pledge Arena in Seattle, UBS Arena in New York and the Moody Center in Austin, Texas. “The quality of the food is really, really great” and keeps people coming back, he said.

Many menu offerings are named after important figures in O’Neal’s family and career. For instance, the best-selling menu item is the Uncle Jerome – a sandwich with hot chicken, lettuce, pickles and mayo – which is named for a childhood friend, nrn.com said. Although he was raised in New Jersey, O’Neal’s mom hails from Georgia, where fried chicken rules, along with other menus items such as mac-and-cheese and fried onions.

O’Neal has said that Big Chicken is a dream for him, and he stars in Facebook videos for the brand. “When I was growing up, mother really stressed education, having things to fall back on and following your dreams,” he told nrn.com. “I always wanted to own franchises. I remember me and [fellow NBA star] Magic Johnson, when I was 18, said, ‘It’s OK to be famous but at some point you want to start owning businesses.’ ”

O’Neal’s partners in Big Chicken are Authentic Brands, which is a brand development, marketing and entertainment group that owns brands such as Sports Illustrated and Elvis Presley; and JRS Hospitality, a Las Vegas events and catering company that operates Beer Park, Cabo Wabo and Hexx  Kitchen + Bar, according to the nrn.com report. Chefs Matt Silverman, the “S” in JRS Hospitality, and Matthew Piekarski created the Big Chicken menu of crispy chicken sandwiches and milkshakes that O’Neal fell in love with as a kid, according to the article.

O’Neal’s other franchise ventures include ownership of Krispy Kremes and serving on the board of Papa John’s International Inc. Those experiences have led O’Neal to appreciate the structure and direction provided in the franchise system, he said.

What Food Franchises Does Shaquille O’Neal Own? 34856