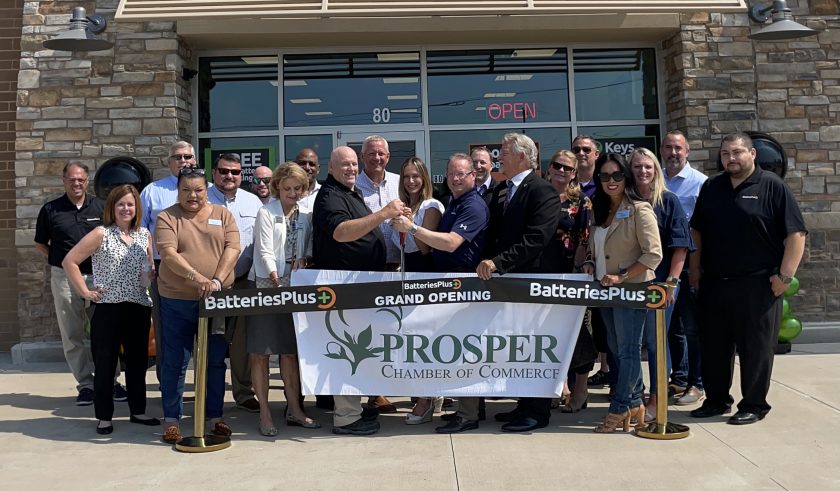 Bruce Mavis (below, seated left) has a lot on his plate. He is managing the acquisition and development of 20 Batteries Plus franchises over the next four years. Fortunately, he always knows where to turn for support and guidance, thanks to the Batteries Plus corporate team. “I have been nothing short of impressed with their responsiveness and commitment to franchisees,” he says.

As a director of The Cobblestone Group II LLC, Mavis represents the interest of Daniel Moos (above, seated, center), a passive investor who started his relationship with Batteries Plus with one location in Prosper, Texas. The shop opened for business on July 12, 2021. While the Prosper location was still in development, an opportunity presented itself to take over five Batteries Plus locations in Las Vegas, and The Cobblestone Group jumped on it. “We were already thinking about opening more locations, so it made sense,” says Mavis.

Now embarking on strategic growth through acquisition and development, The Cobblestone Group is well on the way to meeting its goal of developing six to 10 Batteries Plus locations this year. Two of them are already underway in Utah.

Susan Allen (above, back row, center), who is the other director reporting to Moos at the The Cobblestone Group, is heavily involved in making the plans come to fruition. While Mavis is a strategist and financial planner, Allen works full time for the company to make the plans become reality.

The Cobblestone Group just signed an agreement to develop an additional 10 units in the next four years. “What we liked most is the Batteries Plus philosophy. They grow as the franchisees grow,” he says. “With other franchises, it unfortunately can be other way around — where franchisees don’t come first.”

“The corporate team has a firsthand understanding of the problems franchisees face.”

Mavis recently attended a workshop for Batteries Plus owners where he learned about support initiatives that franchisees can use in addition to the built-in support that comes with franchise ownership. Mavis is excited about implementing some of them as he opens more and more locations. “Essentially the people who help us through these programs become an extension of our staff,” he says.

As The Cobblestone Group grows into its 20 locations, Mavis will implement another Batteries Plus program for inventory. Essentially, the franchise owner pays a fee to corporate to completely take over inventory. “It’s less expensive than hiring a staff person to do the job and much more efficient. In the end, when you know your inventory and keep it low, you can save money,” he says.

Besides commercial clients, a lot of business comes from walk-ins and retail sales. “Batteries Plus is a provider of what people need,” Mavis says. “I highly recommend this franchise.”

Mavis believes that Batteries Plus support is excellent because the company owns several corporate locations. “They have a firsthand understanding of the problems franchisees face,” he says. “They want to see us succeed. It’s really a team effort on all sides.”

What Food Franchises Does Shaquille O’Neal Own? 34849