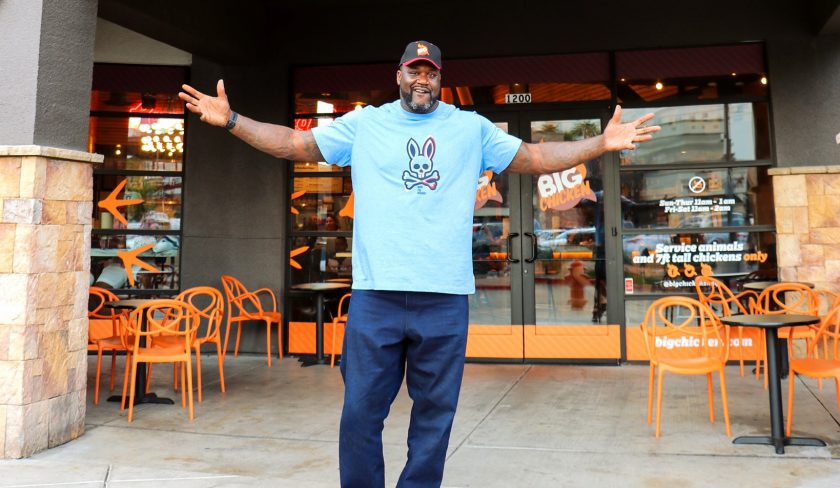 Shaq’s Vision Behind His Investments is not Just About Making Money. He has Set Out to Change Lives for the Better Through Franchise Ownership.

Former NBA star Shaquille O’Neal has a reported net worth of some $400 million, with much of that tied up in ownership of a bevy of franchise restaurant units. As reported by Findingfuel.com, these include 17 Auntie Annie’s Pretzels restaurants, nine Papa John’s, one Krispy Kreme and a Big Chicken restaurant that is being franchised. He formerly was part-owner of 155 Five Guys restaurants.

How’s this working out for him? In a television interview, O’Neal said he makes more annually from his business investments than he did from his $30 million-a-year basketball paycheck. He also told the interviewer that when looking at a potential franchise business, he invests only if he personally likes a product and/or company.

Shaq’s Net Worth is Just Part of the Picture

Although Shaq’s net worth is off the charts, that’s only part of his winning game plan. He also has set out to change lives for the better through franchise ownership. In a 2021 interview in The Wall Street Journal, O’Neal said the following credo also plays a huge part in his decisions: “Whenever I do business, it’s not about the money. I heard Jeff Bezos say one time when he was talking – he says he makes his investment based on if it’s going to change people’s lives for the better. And once I started doing the strategy, I think I probably quadrupled what I’m worth now.”

So what food franchises does Shaquille O’Neal own? Here’s a look, per Findingfueld.com:

O’Neal would like to own 100 units of 83-year-old Krispy Kreme, according to TMZ. His current franchise is in Atlanta, which came with an approximate price tag of $2,750,000. The franchise is famous for its fresh hot doughnuts but also sells hot and cold beverages, soft-serve ice cream, and various shakes. O’Neal told The Wall Street Journal that Krispy Kreme is his favorite business endeavor. He went on to explain that it’s because “I like doughnuts, and Charles Barkley loves doughnuts. And he’s my biggest customer. I wanna be a large part of that business.”

O’Neal’s nine Papa John’s pizza franchises cost in the neighborhood of $800,000 a piece, so he looks to have holdings worth in the neighborhood of $7 million. He also serves as a brand ambassador for the 37-year-old company and has been on its board of directors since 2019. Another sports great, retired NFL quarterback Peyton Manning, owned Papa John’s franchises until 2018.

O’Neal has announced plans to grow Big Chicken, which specializes in mega-sized chicken sandwiches generously bulked up with items such as coleslaw and macaroni and cheese. O’Neal is majority owner of the restaurant, which he founded in 2018. He goes on-camera to market the menu. A popular menu item is the Uncle Jerome, which includes lettuce, pickles, hot chicken, and mayo, and is named after his childhood friend. O’Neal partnered with Authentic Brands, which is a brand development and entertainment group, and JRS Hospitality, a catering and events company, in this business venture. The NBA legend was inspired to grow the brand because he wanted business ownership to be a way for him to provide for himself after his basketball career. O’Neal has stated during interviews that his mother stressed education and having something to fall back on.

Although O’Neal has divested of his Five Guys stake, it’s worth noting that he probably spent $100 million or more for his share of 155 Five Guys franchises. Founded in 1986, the restaurant sells burgers, fries and beverages in strip malls, transportation hubs, sports arenas and on college campuses.

At the International Franchise Association’s 2022 Annual Convention, O’Neal told the audience of more than 3,000 franchise professionals that he wanted to make it in business and not be “one of the 60% of NBA players who go broke after leaving the game.” Through his investments, he has created wealth and empowered others to do the same. The basketball legend co-founded Majority — an ad agency focused on diversity. His vision is to tell stories about diversity and “help open doors, connect dots, create opportunities and celebrate successes,” said cofounder Omid Farhang in an interview with businessinsider.com.

O’Neal isn’t the only athlete making a difference through franchise ownership. There are many former pros who have made their mark as franchise investors, including Drew Brees, Peyton Manning and Phil Mickelson. NBA legend Magic Johnson has helped low-income communities through his company, Magic Johnson Enterprises and his investments in food franchises, including TGI Fridays and Burger King.

Professional athletes understand the value of franchising and its potential impact on local communities.

The Rise, Fall and Reinvigoration of Friendly’s 11814