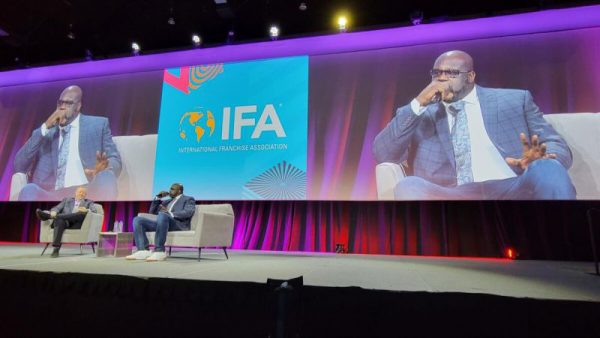 At the International Franchise Association’s Biggest Event of the Year, Shaq Hailed Team Approach, Hard Work and Learning from Criticism

NBA legend Shaquille O’Neal dazzled the franchise community during his appearance at the International Franchise Association’s 2022 Annual Convention with a blend of humor, business advice, personal insights … and even a warning to the Los Angeles Lakers. O’Neal, who has invested in many franchises, was keynote speaker in a discussion onstage with FirstService Brands President Charlie Chase. The IFA’s 62nd annual convention was held Feb. 26-March 1 in San Diego.

Early in his speech, O’Neal tickled funny bones with a tale about a particular sandwich on the menu at Big Chicken, the fast-casual restaurant that he began franchising in 2021. The hefty sandwich features crispy fried chicken, macaroni and cheese, fried onions and roasted-garlic barbecue aioli. O’Neal calls it “the sloppiest sandwich you could ever make,” which is why he named it the Charles Barkley. The two retired NBA stars often toss barbs at one another, especially during TNT’s “Inside the NBA” when they’re wearing their TV-broadcaster hats.

O’Neal also mentioned another NBA Hall of Famer in his address: “I learned from the great Magic Johnson that it’s OK to be a superstar basketball player, but at some point, you want to go and invest in businesses. As a simple model, if it works and you follow the rules, they will continue to work,” referring to the franchise industry.

O’Neal, who turns 50 this month, told IFA Convention-goers that he was determined to avoid being one of the 60% of NBA players who are broke after leaving basketball. “What I learned from the basketball world that applies to the business world is you can’t win a championship by yourself,” he said.

In further advocacy of the team approach, O’Neal suggested a fix for the swooning Los Angeles Lakers when he was interviewed by CNBC during his convention appearance. He said it would be a monumental error for the Los Angeles Lakers to trade Lebron James, a possibility that has set the basketball world abuzz with rumors. “If you trade LeBron, you’ll never win again,” said O’Neal, a standout in his own eight seasons with the Lakers. Instead, he advised the tanking Lakers to surround James with complementary players: “If you put LeBron around the right guys, they are definitely going to win.”

Shaq’s Business Endeavors and Net Worth

O’Neal, who studied business at Louisiana State University, says he surrounds himself with a smart team that has helped him amass a large and evolving investment portfolio that includes a number of franchises. The 15-time NBA All-Star at one time owned more than 150 Five Guys quick-service restaurants, several 24 Hour Fitness locations, and 17 Auntie Anne’s. He currently owns a Krispy Kreme franchise, serves on Papa John’s board, and has invested in nine of the pizza restaurants. And of course, he’s the largest shareholder in Big Chicken, which he founded in 2018. His sidelines include serving as a pitchman for various products (including Big Chicken) and as chief fun officer for Carnival Cruise Line. Shaq’s net worth has been estimated at $400 million.

O’Neal has gone on record as saying he must be a fan of a product before he’ll promote it, and that’s certainly true for Las Vegas-based Big Chicken, which he founded in 2018. “I don’t eat tacos. And I rarely eat steak. I love chicken. I’ve been eating chicken all my life,” he says.

The restaurant concept seems to be catching on. Two standalone Big Chickens, in Glendale, Calif., and Las Vegas, are up and running, along with outlets in Climate Pledge Arena in Seattle and UBS Arena in New York. Big Chicken also has two sites on Carnival cruise ships. Working with Ghost Kitchens Brands, one Big Chicken has been placed in a Rochester, N.Y., Walmart. Ten franchise groups have deals to open 150-plus Big Chickens.

Criticism makes me stronger. I learn from criticism because there’s truth in it.

The 7-foot-1-inch retired athlete also told the IFA audience that he embraces negative reviews about his businesses and learns from them. “I like reading comments. Criticism makes me stronger. I learn from criticism because there’s truth in it.” For instance, instead of reacting defensively to a complaint about something regarding Big Chicken, “I speak to my chefs to see if there was anything wrong.”

O’Neal also told the audience that lessons from his parents have aided his success. His dad, who was an Army drill sergeant, “was never satisfied and told me never to be satisfied.” He said his mom taught him to be generous toward people who are less well off than he is. “People call it giving back. I call it listening to what my mother tells me.”

He applauded the resilience of the restaurant industry, which has innovated to upgrade delivery and takeout services and survived mask and distancing rules as well as shutdowns as it emerges from the worst of the Covid-19 pandemic. Then, in wrapping up the talk, O’Neal said, “I wish you all well,” followed by the punch line “unless you’re in the chicken business.”