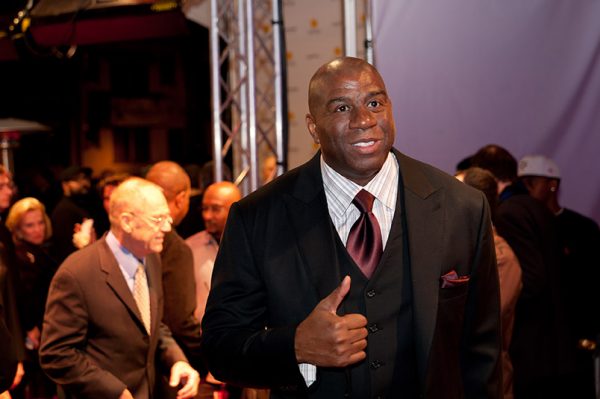 NBA Hall of Famer Earvin “Magic” Johnson may be best known for his time on the Los Angeles Lakers, but his talents have gone way beyond shooting hoops. He also happens to be an all-star businessman and entrepreneur. As of 2022, Magic Johnson’s net worth is estimated at $600 million, making him one of the richest athletes in the world. Although his investments are not limited to franchises, he owns 30 Burger King restaurants, more than a dozen 24-Hour Fitness centers, a TGI Fridays, and has multiple Starbucks licenses. But Johnson is not only in it to fatten his impressive net worth. He is committed to fostering Black entrepreneurship and empowering others.

As founder and CEO of Magic Johnson Enterprises, the basketball legend created the investment company with a vision to provide products and services that focus primarily on ethnically diverse and underserved urban communities. Most of the Hall of Famer’s investments are focused on bringing development to depressed areas. Johnson’s mission and message say it all: “It’s not whether you can become successful…it’s how many people can you help become successful,” he says. And he has.

Through Magic Johnson Enterprises, Johnson and his team have made a huge impact on underserved communities. With Burger King, for example, Johnson hired within the community, created neighborhood partnerships, and provided minority supplier opportunities. As a result, locations marked as MJ Burger King Restaurants saw an average increase in sales of 20% due to increased traffic.

Through his work with Starbucks, Johnson wanted to change the perception that the coffee giant was only for the “elite suburban mom.” Although Starbucks understood that urban customers are important, they never ventured into the urban market. By working with Johnson, they provided a template for multicultural marketing and encouraged favorite pastimes, like chess, that resonated with the community. This impact provided over 2,100 jobs to the community and contributed an estimated $29.8 million in salaries and benefits to Urban Coffee Opportunities and Starbucks partners.

Johnson invested in Miami-based Simply Healthcare and brought awareness to the brand by starring in commercials and appearing on billboards. With his large platform as an HIV-positive patient, he spoke with community leaders and advocated for HIV/AIDS prevention and treatment, the importance of sex education, and how to live life fully with the disease. Through Johnson’s partnership, Simply Healthcare and its specialized Medicaid plan Clear Health Alliance has helped HIV/AIDS patients get the care and services they need.

As a former professional athlete, it is not surprising that Johnson would invest in sports teams. He made headlines when he became a co-owner of the Los Angeles Dodgers for $2 billion. He also co-owns the Los Angeles Football Club, the Los Angeles Sparks, and Team Liquid. Johnson developed several 24-Hour Fitness franchises in urban areas and created a loyal fanbase of members who are 24% more active than members at the franchise’s other locations.

Johnson also invested in the arts with Magic Johnson Theatres. His mission was to provide state-of-the-art theatres to underserved communities. He opened locations in Atlanta, Houston, Los Angeles, Cleveland, and more. This provided thousands of jobs and gave communities new energy. In addition to Magic Johnson Theatres, he also established Magic Johnson Entertainment and Magic Johnson Productions. In 2012, he launched Aspire TV, which was created to share and celebrate the experiences of Black culture and urban lifestyle.

According to BlackBusiness.com, about 28%  of Washington D.C.’s businesses are Black-owned, the highest percentage in the U.S. Other states with a large percentage of Black-owned businesses include Georgia (20%) and Illinois (19%). Although a small percentage of franchises are Black-owned, more and more young Black franchise founders are coming on the scene and fostering Black entrepreneurship. Last year, the International Franchise Association (IFA) launched the Black Franchise Leadership Council (BFLC) to increase access to and awareness of franchise business opportunities for Black entrepreneurs.

The business success of Magic Johnson and other celebrity athletes has had a major impact on underserved communities. Not only are these athlete investors creating opportunities for employment, but they serve as role models and offer inspiration for Black entrepreneurship and the growth of Black-owned businesses.