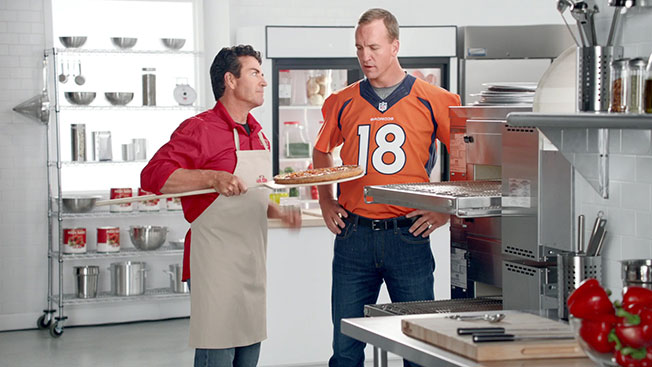 Why is the Retired NFL Quarterback is No Longer a Multi-Unit Franchisee for the Pizza Giant?

Former National Football League star quarterback Peyton Manning, who led the Broncos and Colts to Super Bowl victories, owned 31 Denver-area Papa John’s Pizza sites from 2012 until 2018. “It’s a smart investment now and will be long after I’m done playing football,” Manning told the news media when initially revealing his franchise ownership. (It was never publicly clarified whether his Papa John’s franchises came to him as part of his compensation as a celebrity advocate for the company.)

Manning soon became an active cheerleader for the franchise, making several television commercials, including some with John Schnatter (above), who was the company’s founder and its then-CEO. In one ad, Manning enthusiastically gave fans information about how to join him in becoming a franchise owner.

During the period when Manning was a Papa John’s multi-unit franchisee, the NFL also had close ties with Papa John’s, forming a partnership that began in 2010, according to Restaurant Business.

Through their Papa John’s roles, Manning and Schnatter developed a friendly relationship that continued off-camera. In 2016 the men very publicly embraced on the football field following Manning’s victory in Super Bowl 50, his second such triumph.

Papa John’s and the NFL

But on Feb. 26, 2018, Manning sold off all of his Papa John’s stores, seemingly a sudden move that caught many by surprise. (The International Franchise Association recommends a deliberately stepped process for transitioning out of franchise ownership.) Only two days later, the NFL and Papa John’s divorced.

USA Today reported that the entities split because of slumping pizza sales. Papa John’s had posted a 3.9% decline in sales during the fourth quarter prior to the sale. In a statement, Schnatter blamed the league for the decline in revenue: “The NFL has hurt us by not resolving the current debacle to the players’ and owners’ satisfaction” – the “debacle” being a reference to Black players’ kneeling during the national anthem to protest police brutality toward Blacks and more generalized racial injustice in the United States. (Steve Ritchie replaced Schnatter as Papa John’s CEO in December of 2017.)

Schnatter’s remarks clearly didn’t encourage the NFL to maintain the relationship, and on Feb. 28, 2018, the NFL and Pizza Hut revealed that they had forged a partnership. NFL Commissioner Roger Goodell welcomed the change to a new pizza franchise alliance as follows: “With a focus on family, friends and fun, Pizza Hut has the creativity we are looking for in a partner.”

Manning’s football success may have launched his celebrity, but he’s broadened his appeal with a strong on-camera comedic delivery and an everyman appeal long after retiring in March 2016. Those same qualities have also made Manning a perfect pitchman in his gigs for DIRECTV, Gatorade, MasterCard, Nationwide and Nike, among others. And he’s even landed his own TV show, Peyton’s Places, which airs on ESPN+.

It was a bit surprising when Ritchie was replaced by Rob Lynch, the former president of Arby’s, less than two years after being named CEO.  Ritchie has a long history with Papa John’s; he began working for them for $6 an hour in 1996 and then moved up the ranks to became a franchise owner just a decade later. The love he had for the company ran deep, and he would even say he went to “Papa John’s University” for his college career. Ritchie’s ousting came amid the hedge fund Starboard Value’s investment in Papa John’s, which gave Starboard Value’s CEO the role of chairman as part of the deal. Schnatter, Papa John’s largest stakeholder with a 16.7% stake, said that Ritchie should’ve been replaced following the Starboard investment and likes Lynch as a replacement.

Being a businessman and professional athlete has greatly contributed to Manning’s net worth. Over the course of his career, Manning has amassed an estimated net worth of $250 million, according to Celebrity Net Worth. Even after retirement, Manning reportedly earns at least $10 million annually just from endorsements. To put that in context, his average annual salary with the NFL was $18 million. Manning’s endorsements include ESPN, Master Card, Reebok, Spring, DirecTV, and Gatorade. He also has a philanthropic streak and founded the Peyback Foundation, which helps disadvantaged kids.

Many other athletes, including Shaquille O’Neal and Magic Johnson, have also found success off the field as franchise owners. Athletes and franchising go well together because these superstars enjoy semi-absentee ownership. This is attractive to athletes because they can treat their franchises as investments and not a lifestyle change. Business ownership is great for athletes to fall back on because they on average retire at the age of 30, according to a study by the RBC Sports Professionals group.

What Food Franchises Does Shaquille O’Neal Own? 34948