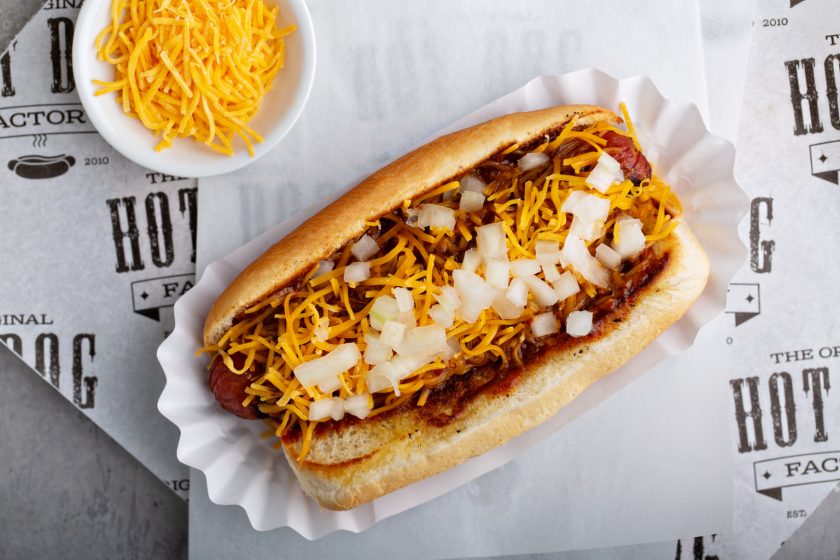 On National Hot Dog Day, Find Out Who is Top Dog in the Frankfurter Business

During the summer, one of the most popular go-to foods is the hot dog. Americans can’t get enough of the fun, portable snack that’s found at just about every baseball game and amusement park in the U.S. According to the National Hot Dog and Sausage Council (NHDSC), Americans spent over $7.5 billion on hot dogs and sausages in 2021. This love for hot dogs translates into business opportunities for entrepreneurs looking to cash in on the booming QSR industry.

Even though hot dogs are popular in the summer, people enjoy them all year round. And not just with mustard and relish. Creative franchisors have come up with innovative ways to serve them gourmet-style.

So when it comes to the frankfurter business, who is top dog? It may just be a matter of personal preference. Here is a look at some of the best hot dog franchises.

The Original Factory Hot Dog Factory franchise is known for its creatively-prepared dogs that keep customers coming back for more. Its hot dogs are boiled, grilled, or fried and served with a variety of toppings. The Atlanta-based hot dog franchise is looking to expand across the U.S. The Original Hot Dog Factory also names its food after cities. For example, customers can enjoy the Detroit Coney, the LA Dog, the New Yorker, and the Boston Dog. They can also have the San Francisco Veggie Dog, which is a veggie soy hot dog topped with onions, tomatoes, lettuce, and brown mustard.

The Crave Hot Dogs & BBQ franchise has a menu full of gourmet dogs and mouthwatering sides, such as fries, mac and cheese, beanless chili, and more. Crave also has menus specifically for its food trucks and breakfast. The hot dog franchise’s self-pour beer wall is attractive for local craft and IPA drinkers. Customers can enjoy wine, and some locations even have cocktails on tap. Ax throwing lanes, online ordering, curbside pick up, delivery, and a mobile app add revenue to your business. In addition to serving great food, Crave also gives back with its non-profit organization Crave Saves, which brings awareness and prevention to child trafficking in the U.S. Crave is also a veteran-friendly franchise. According to the hot dog franchise’s website, more than 90% of its franchise owners are veterans or active duty service members.

When Americans think of hot dogs, the iconic Nathan’s Famous comes to mind. The hot dog brand started from a cart that Nathan Handwerker, a Polish immigrant, operated. Nathan’s hosts a hot dog eating contest yearly on Coney Island near where Handwerker first set up his cart. Nathan’s also serves burgers, chicken, onion rings, sandwiches, fries, and shakes. The hot dog franchise has various flexible location options, including a free-standing store with a drive-thru, an inline location with a drive-thru, and Nathan’s Express, a smaller location that ranges between 500 to 900 sq. ft. and offers a customizable menu.

The Dog Haus franchise specializes in gourmet hot dogs and has attracted a cult-like following with its fresh ingredients, proprietary recipes, and made-to-order items. The hot dog franchise was founded by Hagop Giragossian, Quasim Riaz and André Vener in Pasadena, Calif., in 2010. Dog Haus has been awarding franchises since 2013 and has opened more than 30 locations across the U.S. One of its popular gourmet hot dogs is the Free Bird, which is a turkey dog topped with avocado, tomato, smoked bacon, and miso ranch. The hot dog franchise’s menu also includes burgers, chicken, sliders, ice cream, and craft beer. Dog Haus franchisees are part of a brand that helped raise funds to provide over one million meals to No Kid Hungry.

Hot Dog on a Stick

The Hot Dog on a Stick franchise has been part of American culture since 1946 and was founded by Dave Barham. Growing up, Barham used his mother’s cornbread recipe to cover his dog instead of using a bun. Since beginning as a beachfront store in Santa Monica, Calif., Hot Dog on a Stick has expanded to more than 75 locations in the U.S. and South Korea. The hot dog franchise stays true to its roots by serving its classic hot dogs on a stick and lemonade and keeping its red, white and blue striped uniforms. Over time, its menu has changed to include cheese on a stick, funnel cake sticks, French fries, and Nathan’s Famous beef hot dogs. Franchise owners provide a feel-good service, and veterans are incentivized to invest with a 25% discount off the franchise fee. Franchisees will enjoy being able to go where customers are with a mobile unit. Franchisees also appreciate giving back to the community through the hot dog franchise’s partnership with the Leukemia & Lymphoma Society. Multiple revenue streams come from online ordering, merchandise sales, and catering opportunities. Hot Dog on A Stick is under the FAT Brands umbrella of fast-casual franchises.

While the SONIC Drive-In franchise has a large menu that includes burgers, chicken, sandwiches, and shakes, customers also enjoy the company’s popular hot dogs. These include the Chili Cheese Coney, the Footlong Chili Cheese Coney, the All-American, and the corn dog. Franchise owners benefit from the hot dog brand’s five day parts: breakfast, lunch, afternoon, dinner, and evening. The company’s name recognition also doesn’t hurt; SONIC has three million daily customers.  SONIC franchisees are provided with flexible footprints – which have been revamped – that work in traditional and non-traditional locations. With more than 32,000 locations around the world, SONIC and its drive throughs are a fun addition to any community. The average store size is between 1100 – 1700 sq. ft with an initial investment will be between $1.24 – $3.53 million. SONIC is under the Inspire Brands umbrella of franchises along with Dunkin’, Jimmy John’s, Buffalo Wild Wings, and Arby’s.

Destination Dogs offers gourmet sausages and dogs and was founded by Jimmy Cronk and Sean Hosty, who met while working at Clydz restaurant in New Brunswick, N.J. They share a passion for food and travel. The hot dog franchise’s food is served with its signature cocktails. Destination Dogs keeps up with the latest food trends including vegetarian, comfort food, and regional signature cocktails, global cuisine, ethnic fusion, and more. The franchise’s streamlined concept attracts a wide range of people from singles to family and young people to seniors.

The Hula Dog franchise is a Hawaiian-themed hot dog concept that is looking to reinvent the identity of the American dog. What differentiates Hula Dog from the competition is that a hole is toasted into bread for the hot dog, which is then snuggled around the hot dog like a hula hoop. The business is set in a bamboo hut and has condiments that feature fruits and sauces, such as Mango relish.

The Windmill Hot Dogs franchise is based in New Jersey. As a way to give back to the community, franchisees get their meat from local butchers. In addition to its Bigger! Better! hot dogs, which are prepared by Sabrett, its menu includes rib-eye steak sandwiches, charbroiled gourmet chicken breasts, french fries, and more. Customers can join Windmill’s coupon club and rewards program for discounts. While the hot dog franchise doesn’t offer a finance program, previous business owners have qualified for U.S. Small Business Administration loans.

The Wienerschnitzel franchise is one of the largest hot dog brands in the world and has a variety of specialty dogs. These include Junkyard Dogs, which are covered in fries, chili sauce, cheese, French’s mustard and grilled onions. In addition to its hot dog offerings, such as the Chili Dog, All-Beef Dog, Polish Dog, and Corn Dog, Wienerschnitzel also serves breakfast, burgers, and sandwiches. The ideal candidate looks to own multiple units and focuses on great customer service.  Wienerschnitzel is such an important part of Southern California’s culture that Los Angeles County named its first location an historical site. Since awarding its first franchise in 1961, Wienerschnitzel has expanded to more than 325 locations in 10 states.