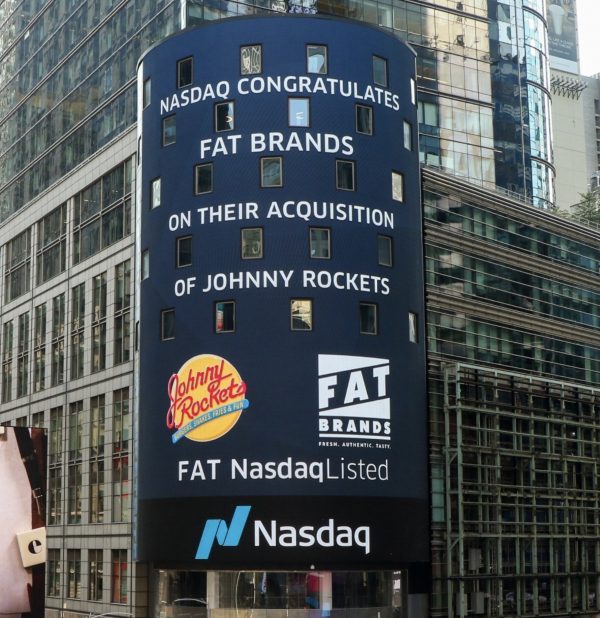 Seems like every time you read the restaurant news or franchise news during the last half of 2021, FAT Brands Inc. had scored a huge deal. It chipped out $442.5 million to buy Global Franchise Group last summer, a move that expanded its holdings to 14 brands by bringing Great American Cookies, Hot Dog on a Stick, Marble Slab Creamery, Round Table Pizza and Pretzelmaker into its fold. Then within another four months or so, FAT Brands disclosed it had nailed down agreements to buy Twin Peaks sports bars for $300 million and Fazoli’s for $130 million. And finally, FAT Brands ponied up $20 million for 23-unit Native Wings and Grill.

In total, FAT Brands spent nearly $900 million in approximately five months. As a result, FAT Brands has grown to include 17 concepts, 2,300 franchised and company-run sites worldwide, and system-wide sales of roughly $2.3 billion, according to figures from qsrmagazine.com. Those holdings are distributed throughout 48 states and more than 40 countries, with 800 franchisees (half of them multi-unit owners). QSR also reported that FAT Brands will open about 800 additional restaurants in the next five years or less.

FAT Brands actually began its string of headlining acquisitions in September 2020, when it bought Johnny Rockets for $25 million, doubling the company’s portfolio. FAT Brands Inc. CEO Andy Wiederhorn calls that a “gutsy move” because Covid-19 pandemic capacity limits were still being enforced and vaccines were unavailable. With that deal, Wiederhorn says FAT Brands had put its “financing and house in order.” Soon many Covid mandates would abate, and his company found several brands amenable to deals.

Wiederhorn explains that private equity firms typically hold companies for five to seven years to develop brands but felt they lost time during the pandemic and were ready to cash in. “We took advantage of that a little bit. Some of it was just natural timing of people already owning things for five or six years and time to roll out of it.”

Varied reasons made each particular deal attractive. For instance, Twin Peaks and Fazoli’s held promise for growth, Wiederhorn says. The sports bar brand has some 85 sites, but about 130 more planned starting next year; quick-service Italian cuisine brand Fazoli’s had about 220 restaurants at the time of the deal and 100-plus more in the works. Wiederhorn says the idea was to leave the management team in place and not streamline expenses by merging or eliminating departments. “We can always talk about synergies later, but right now it doesn’t make sense. Let those guys run.”

By contrast, the Global Franchising Group deal offered attractive cost-saving synergies because FAT could shutter its headquarters while merging departments such as legal and accounting – plus the deal added a factory with excess capacity. Native Wings also was motivated by synergies. As an aside: FAT Brands nearly sprang for the 600-unit Del Taco operation, too, but Jack in the Box landed that brand for $575 million in December, according to the QSR report. “We looked hard at the Del Taco deal,” Wiederhorn says on a QSR podcast. “We put in a preliminary bid, we did diligence, and we decided that it was just too many company-owned stores, and that was just going to be a lot of work. I think that’s a great deal for Jack in the Box,” given their strong presence in the quick-service restaurant domain. “I think it makes a lot of sense.”

What food franchises does Shaquille O’Neal own? 5597

Franchisors are making it easy to find purpose through work 2981

Why is Chick-fil-A better than McDonald’s? 2970