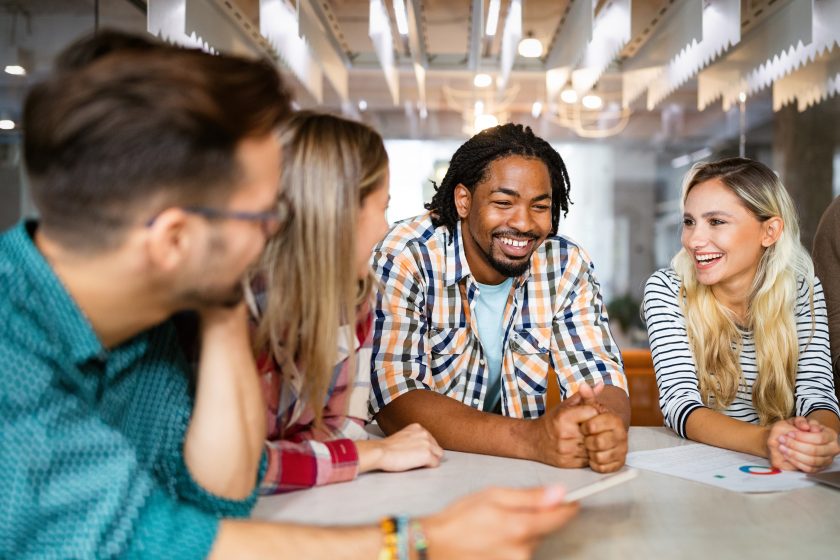 Many Fast-Casual Franchisors are Strong Believers in Diversity, Equity, and Inclusion. Here’s a Look at Some Examples.

These days, franchise companies want to do more than just make a profit. They want to foster an inclusive, people-first culture where everyone is welcomed and heard. As a whole, the franchise industry has become more inclusive through diversity, equity, and inclusion (DEI) initiatives.

Diversity and inclusion are at the heart of the franchise industry. Entrepreneurs from all walks of life have the opportunity to run a successful franchise business without the fear of discrimination based on race, age, religion, or sex. The International Franchise Association (IFA) champions initiatives that include diversity in franchising. The IFA’s efforts have helped elevate communities and empower minority entrepreneurs to build generational wealth.

Minorities have achieved great success in franchising. According to the U.S. Census Bureau, there is a higher minority ownership rate among franchised businesses than in independent ones: 30.8 percent of franchises are owned by minorities, compared to 18.8 percent of independents.

One way for franchisors to get the word out about their DEI initiatives is through webinars. For example, the U.S. Small Business Administration partnered with Public Private Strategies Institute to host a webinar for Native Americans, and the IFA’s Franchising Pride Council discussed DEI initiatives for the LGBTQIA+ community. Franchisors can also join in events from IFA councils, including the Hispanic Latino Franchise Leadership Council and the Black Franchise Leadership Council, which increase franchise ownership and education for underrepresented groups. There are many ways for franchisors to increase diversity within their companies. Here’s some inspiration from fast-casual franchisors that have made DEI initiatives the center of their culture.

The fast-casual brand Panera Bread stepped up its DEI efforts through virtual-learning sessions to improve cultural interactions among associates and customers. Following the death of Geroge Floyd in 2020, Panera released a three-year plan to improve DEI efforts and examined its own culture. The plan focuses on three commitments: representation, community, and an inclusive culture. Vice president of diversity, equity, and inclusion Pamela Morris-Thornton noticed that minorities were underrepresented in leadership and associate positions.

As a result, the fast-casual brand launched an accelerator program called the Panera Dream Project in 2021 to help members of minority communities move up the ranks of the company. To foster an inclusive culture, Panera associates are invited to join any one of its six Business Resource Groups, including BLACC, which offers assistance to Black, African American, Latin, African and Caribbean associates; and the Panera Pride Alliance, which is dedicated to LGBTQIA+ members. Panera also supports local organizations that have DEI initiatives. For example, Panera has worked with the Urban League of Metropolitan St. Louis to empower African Americans through economic self-reliance.

The popular full-service restaurant franchise Denny’s partnered with the Pathways to Black Franchise Ownership program of the Multicultural Foodservice and Hospitality Alliance (MFHA). This partnership aims to help the MFHA establish 100 Black-owned franchises by the end of 2023. To do this, Denny’s Corp. and the MFHA offer African Americans training, coaching, and more to help them become successful franchisees. Over the past three decades, the full-service restaurant franchise has donated more than $2 billion to underrepresented suppliers, according to a press release.

Another franchisor that has DEI initiatives is Noodles & Company. The fast-casual franchisor strives for gender parity and has earned the Women in the Lead Certification for its investments to empower its female members. Through its Uncommon Good initiative, the fast-casual brand created Noodles Resource Groups, THRIVE and PROUD. THRIVE provides Black, Indigenous, and People of Color (BIPOC) members with a space to communicate, and PROUD does the same for the LGBTAIQ+ community. To hold itself accountable and foster a welcoming culture, Noodles & Company established an Inclusion and Diversity Advisory Council. Similar to Denny’s, Noodles & Company adopted the MFHA’s Pathways to Black Franchise Ownership program to increase generational wealth for the community.

The Golden Arches has had a controversial legal past with its Black franchise owners and has been criticized for racial stereotyping when purchasing ads. But the fast-food giant has made large investments to increase diversity. In 2021, McDonald’s invested $250 million to help minorities open franchise locations. The fast-food brand also pledged to offer low-interest loans to increase diversity among its U.S. franchise partners and disclosed plans to spend more on ads with Black-owned media companies.

The coffee brand may be known for its donuts and espresso drinks, but Dunkin’ is a firm believer in diversity and inclusion. To increase cultural awareness, provide career development opportunities, and more, Dunkin’ set up Employee Resource Groups (ERG). These include the Veterans ERG, which supports military personnel; WIN, the coffee franchisor’s Women’s Integrated Network; and INspire, Dunkin’s ERG for the LGBTQIA+ community. Dunkin’ has also signed the White House Equal Pay Pledge and partnered with the NAACP for its Diversity in Franchising Initiative.

Inspire Brands, the corporate franchisor of fast-casual brands like Dunkin’ and Arby’s, offers business resource groups that are employee-led. For example, the corporation created the Black Voices at Inspire, Champions of Women Leaders, Inspire Vets, Pride, and more. A report from Inspire states that it performs pay equity analyses frequently to address any conscious or unconscious bias trends.

Self Esteem Brands, the parent company of wellness franchises like Anytime Fitness and Basecamp Fitness, also believes in DEI initiatives. To increase minority business ownership, the corporate franchisor implemented a new diversity initiative program that waives $7,500 of the franchise fee for qualified candidates. Additionally, Self Esteem Brands partnered with the J3 Collaboration Project to build connections with nonprofit organizations like the U.S. Black Chamber of Commerce and the Players Coalition.

What Food Franchises Does Shaquille O’Neal Own? 58078