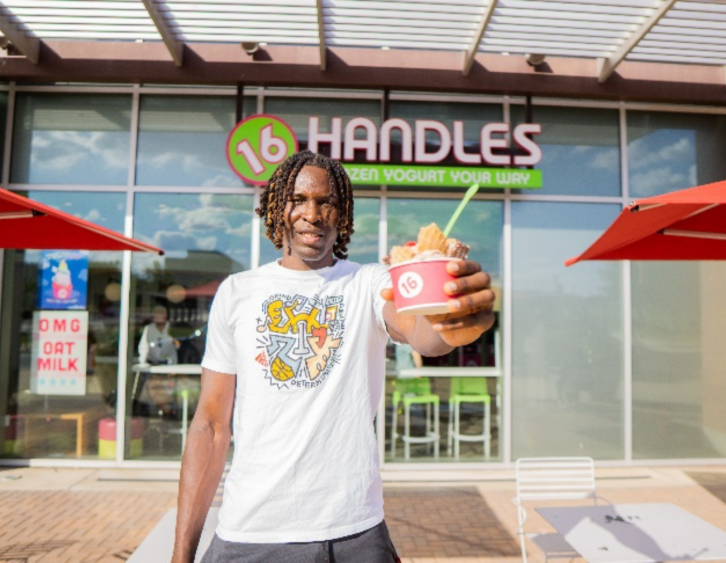 16 Handles, a self-serve frozen dessert franchise, has added a star to its team: Cliff Omoruyi, the 6-foot-11-inch-tall standout center for Rutgers University’s Scarlet Knights men’s basketball team. Omoruyi has signed with 16 Handles under the name-image-likeness (NIL) agreements that are now allowed for amateur collegiate athletes under NCAA rules.

Neil Hershman, CEO of 16 Handles, said he’s very pleased that Omoruyi is his company’s first NCAA partner. “We admire his success on and off the court with his leadership, academic discipline and community involvement,” Hershman stated in a news release. “This partnership is especially sweet given Cliff is the star center at Rutgers University — the home to 16 Handles’ first on-campus store location, and because it helps us to support community programs via the Salvation Army.”

Omoruyi, a junior at Rutgers University, led NCAA Division 1 in dunks last season and is set to be the focal point of the Scarlet Knights’ offense during the 2022-2023 season. His reputation for community service makes him an excellent partner and representative for the brand, the news release said.

This summer, Omoruyi volunteered as a counselor at the Books & Basketball program at the Salvation Army’s Newark West Side gym. That makes him an especially valued partner to 16 Handles.

As part of its mission, 16 Handles gives back to communities where its shops are located; it works closely with community-service organizations both nationally and locally through fundraisers and other activities. 16 Handles will make a contribution to the Salvation Army as part of the company’s relationship with Omoruyi.

Founded in 2008 as the first self-serve frozen dessert shop in New York City, the 16 Handles brand has locations throughout New Jersey, including one on Rutgers University’s Livingston Campus. The majority of the franchise’s two-dozen-plus locations are in New York State, but 16 Handles also has several additional sites in New Jersey, plus two in Connecticut and one in Florida.

As 16 Handles has grown, the brand has developed a menu that still includes frozen yogurt but extends well beyond: ice cream, vegan soft serve, a large variety of toppings, beverages and more.

Other Franchises with NIL Deals

The NCAA began allowing college athletes to license their names, images and likenesses on July 1, 2021. Many types of companies have been signing these athletes to assist in their public relations and advertising efforts. Two franchise brands made headlines with their NIL deals. College HUNKS Hauling Junk has a partnership deal with the University of Miami football team’s high-profile quarterback, D’ Eriq King. Nicole Webb, a standout on the North Carolina State University’s gymnastics team, has promoted Shuckin’ Shack.