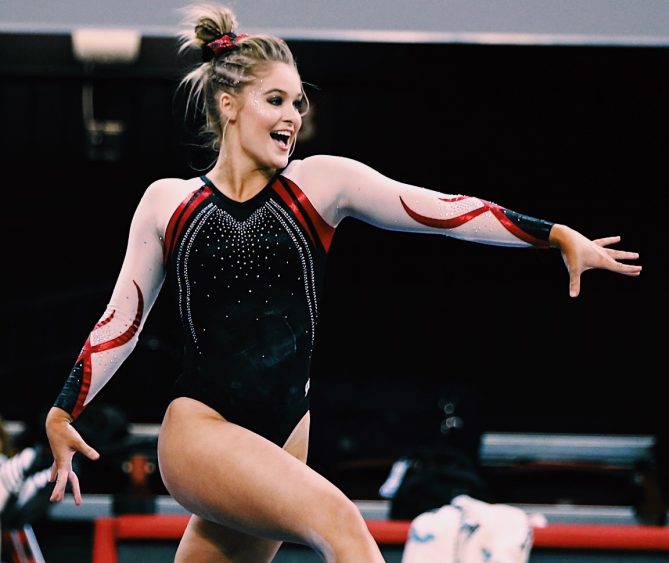 When the NCAA rules changed on July 1, 2021, and started allowing college athletes to make money by selling their name, image and likeness (NIL), opportunities for sponsorships presented themselves to franchisors, too. The Shuckin’ Shack oyster bar franchise jumped right in with its Shack-lete program and opened doors for sponsorships of local college athletes. The Shack-lete program is a win-win. It not only helps college athletes earn money, but also builds a greater sense of community for local Shuckin’ Shack franchises.

Shuckin’ Shack is allowing and ensuring that every athlete is noticed and valued. The Shack-letes aren’t only from the big marquee sports programs, either. The company’s mission is to help out the lesser-known athletes. For example, Shuckin’ Shack’s inaugural Shack-Lete (top photo), Nicole Webb, is a senior from the NC State gymnastics team.

There are currently 11 Shack-letes signed and sponsored, including Aliyah Milicia from Western Carolina University Women’s Soccer. “Shuckin’ Shack Athletics is creating an all-inclusive athletic program with a focus that other companies and businesses have overlooked,” she says. “They are providing an opportunity that includes ALL athletes, not just the ‘high revenue’ athletes involved in sports such as football and basketball.”

For Milicia, being a Shack-lete is extra special since she has been an employee of Shuckin’ Shack since she was 16. “I am extremely thankful to have worked within this innovative environment, with amazing owners and supportive managers who contributed to my education and soccer career, while allowing me to contribute and serve their customers,” she says. “NIL is not regulated, yet it is supporting a non-discriminatory approach, similar to the Shuckin’ Shack team. They are doing something to ensure inclusion among all collegiate athletes.”

Darren Keeler, Shuckin’ Shack’s VP of marketing and creative, explains why choosing the right type of athlete goes with the spirit of the oyster bar franchise, “Really, we want to sponsor the underdogs of collegiate athletes. And that goes with our character and our culture. We want the underdogs, who are the heart of the team.”

Keeler describes the new rule as a gift from the NCAA. “Now — and it’s about shuckin’ time — college athletes can accept sponsorships for their NIL and support themselves while still in school,” he says.

As Keeler put it, “the past year has seen a lot of companies and brands trying to figure out what this NIL thing really is, and colleges are doing the same. This is brand new to everybody, but Shuckin’ Shack is a sports bar. We actually don’t even care what sport is on. If it’s college gymnastics or curling, we’ll watch it at Shuckin’ Shack. It just fits in with our brand.”

Shuckin’ Shack decided to take the lead and start working with Icon Source to set up a new sponsorship program. So far, the results speak for themselves because it’s working out better than anyone hoped, which is great for the future of college athletes and potential Franchise Owners. “It’s a win-win, no matter how you look at it,” Keeler says.

Wait, College Athletes Didn’t Get Paid for Their NIL Before?

In the past, the NCAA wouldn’t let student-athletes profit a single dime personally while simultaneously licensing those students’ NIL to marketers, advertisers, and even national retail outlets. Think of all those legendary college quarterbacks that never go on to the pro level but become local legends in their own right. Before the U.S. Supreme Court ruled against the NCAA’s insane logic for not paying athletes, no proceeds from jersey sales or t-shirts would filter down to the student, not a penny.

If students were caught licensing or promoting their NIL, they could lose their scholarship, be expelled from school, or force the college to limit scholarship offers. Thankfully, the courts finally called out the NCAA’s reasoning, which essentially went as follows: “we can’t pay our employees (student-athletes) because our customers (fans) prefer them not to be compensated since, in their eyes, that makes the game pure.” That’s really what the NCAA argued – and ultimately lost to the applause of thousands of college athletes nationwide.

In a nutshell, here’s how the Shack-lete program works. “What we do is sponsor collegiate athletes who are local to our Shuckin’ Shack franchises, so let’s say a couple of weeks ago we just signed Elise Bauer, who is a swimmer for the University of Florida,” Keeler explained.

We sponsor collegiate athletes who have ties with our hometowns or any family members close to our locations.

“We send them apparel. We send them gift cards. They post on social media at their local Shuckin’ Shack, and they get to know our owners and our staff. These college athletes are wearing our apparel around campus, and they’re even bringing their teammates to Shuckin’ Shack now, which is awesome,” Keeler said.

“Think of it as influencer marketing at hyper speed. By sponsoring young local athletes, even if they never reach the pro level, Shuckin’ Shack is building genuine relationships with the community, not just promoting a bar,” Keeler says.

With 16 open locations mainly on the East Coast, Shuckin’ Shack plans to officially go national, “We are opening locations just outside of Chicago, in Naperville, Illinois, in the St. Louis area, and then also in Mansfield, Texas. 2022 has been pretty good to us where we are officially crossing the Mississippi,” says Keeler. “Pretty soon, you’ll start seeing Shuckin’ Shacks in Hawaii if this pace keeps up over the foreseeable future. Still, that kind of expansion doesn’t happen overnight, and it certainly isn’t possible without staying ahead of the curve and thinking outside the box.”

Tyler Woodard
Tyler Woodard has more than a decade of connecting individuals to life-changing opportunities. He has spent the last year immersed in the world of franchising as a Development Manager for Raintree a Denver-based franchise development agency. Fun fact about Tyler is that he has a two-colored eye, and when not on calls with customers, he enjoys all the activities the Rocky Mountains have to offer and drinking craft beer with his dog. Connect with him on Linkedin!