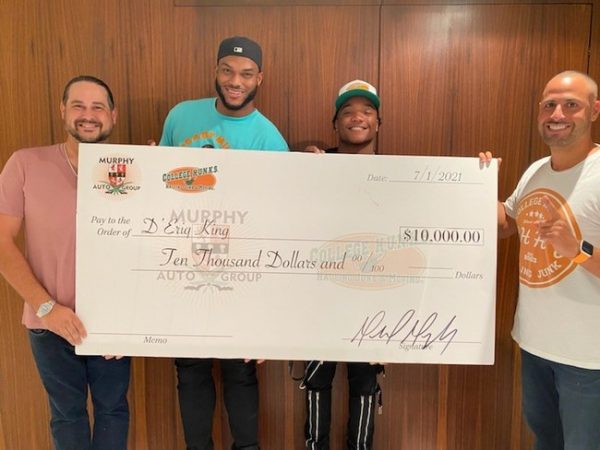 College HUNKS Hauling Junk and Murphy Auto Group are the first U.S. companies to sign a college athlete – D’ Eriq King, the star quarterback of the University of Miami – to a Name, Imaging and Licensing (NIL) contract. Florida is one of the seven states that allows collegiate athletes to have control of their names and images and earn money from them. “College HUNKS is an organization that cares for its people, offers them incredible support, and backs it all with solid values, which makes them an attractive endorsement partner,” said King. “I’m looking forward to working with them and aligning myself with this first-in-class brand.”

A U.S. Supreme Court ruling in late June cleared the way for such NIL contracts by lifting past NCAA controls of and restrictions on amateur athletes. Supreme Court Justice Brett Kavanaugh, in his opinion supporting the athletes in the ruling against the NCAA, said the types of restrictions that the association had placed on athletes – while the organization earned large sums from their efforts – would be illegal in any other business realm.

College HUNKS and Michael D. Murphy of Murphy Auto Group wanted to be the first to make an NIL deal with a college athlete, and theirs was signed at the stroke of midnight on July 1 – the earliest opportunity to execute such a contract. “King is joining us at such a momentous time for college sports and for our business. We are thrilled to welcome him to our team and have him represent our brand,” said Nick Friedman, Co-Founder of College HUNKS.

The University of Miami happens to be the alma mater of HUNKS Co-founder Omar Soliman. “As a former UM Hurricane, this is such an honor for our organization to be able to support my alma mater and athletes who work so hard at their sports,” said Soliman. “College HUNKS is committed to building and supporting leaders. Through our partnership with D’ Eriq King, we hope that we can help further his growth as he heads his football team, while also navigating school and life.”

The statement also said the men feel that it’s important for student-athletes to be acknowledged as the tremendous assets that they are to their schools. They said that student-athletes will greatly benefit their companies’ marketing programs and that the companies would be partnering with three more student-athletes in the future. “With partners like College HUNKS Hauling Junk and Murphy Auto Group working with athletes on the NIL contracts,” the statement said, “they will help support the athletes in maximizing their marketing potential and future income.”

Full details of King’s contract were not disclosed, but the statement from College HUNKS and Murphy Auto Group said the companies will design a traditional, digital and social media marketing campaign around the football star.

College HUNKS Hauling Junk was established in 2003 by two college buddies with a beat-up cargo van and now has more than 150 franchises providing full-service residential and commercial moving, junk removal, donation pickups and labor services in the United States and Canada. HUNKS, which stands for Honest, Uniformed, Nice, Knowledgeable, Service, is a socially conscious, values-based organization.

Murphy Auto Group has been in the new and used automotive franchise business since 1979 and has dealerships in Georgia and South Carolina as well as Florida. Murphy Auto Group is known for its philanthropic efforts and has a long history of aiding community initiatives, military organizations, humanitarian missions, educational institutions and youth programs.