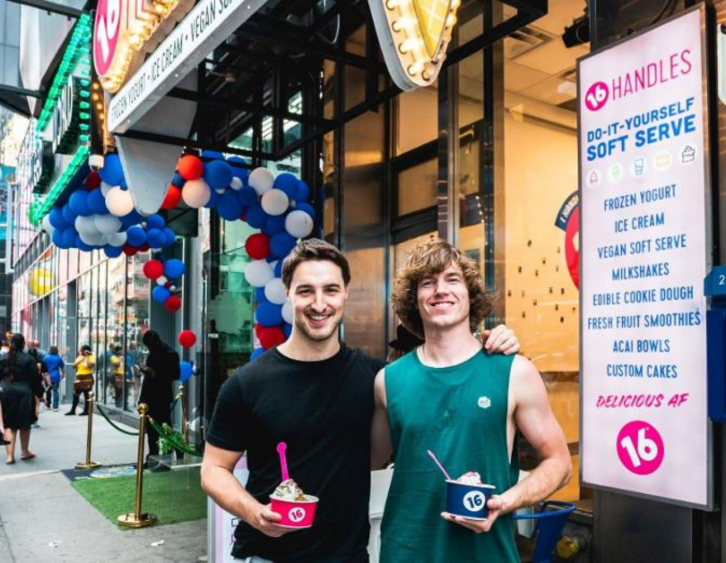 New York entrepreneur Neil Hershman (top, left) and YouTube star Danny Duncan (top, right) have teamed up on a sweet deal. They are the new owners of 16 Handles, a leading soft-serve frozen yogurt franchise brand that started in New York City’s East Village. While specific details of the deal haven’t been disclosed, Hershman will lead the franchise as CEO, and Duncan will serve as Chief Creative Officer. According to a press release from 16 Handles, the YouTube phenom has more than 1.5 billion views and over $50 million in merchandise sales, which was attractive to 16 Handles founder Solomon Choi.

Choi started 16 Handles in 2008 to achieve his dream of creating and building a brand. He sees that same passion in Hershman, a multi-unit franchisee with locations in New York City’s Chelsea, Tribeca, Times Square, Murray Hill, and the East Village. In addition to his 16 Handles locations, Hershman opened Captain Cookie & the Milkman, a cookie and ice cream company near New York University’s campus.

Choi believes that Hershman’s passion is what 16 Handles needs to grow as it expands nationally. In a statement, Choi said, “I want to see 16 Handles grow and evolve, and Neil has the right mindset to set lofty goals and put the right plan together, which is exactly the type of leadership the brand needs.”

In addition to a strong leadership team, Hershman believes that the 30-plus unit franchise can continue to grow and attract franchise partners due to its high-profit margins and low labor costs. He adds that 16 Handles’ key demographic isn’t just children; people of all ages love the brand’s frozen treats. To increase visibility to a wider audience, 16 Handles has also partnered with food and beverage companies like Junior’s Cheesecake and Oatly, as well as the popular Broadway show, Dear Evan Hanson.

Hershman is excited to see new leadership for the brand. “With the new ownership, 16 Handles has both the benefits of an established business, having decade-old stores with continued revenue increases year over year, and a startup, with the ability to test and launch innovative ideas and partnerships quickly and efficiently,” Hershman said in a statement.

Duncan looks forward to growing 16 Handles to the U.S. In a statement, Duncan said, “It’s important for me to invest in a company that has a great product, but also a company that brings people happiness.” He adds that he is excited to open a 16 Handles location in his hometown of Englewood, Fla., and assist with the franchise’s expansion across the country.

The original 16 Handles location was the first self-serve frozen yogurt shop in New York City when it opened in the East Village in 2008. The frozen yogurt brand, which has 16 different frozen desserts and more, has expanded to over 30 locations. To give back to the community, 16 Handles partners with charitable organizations.