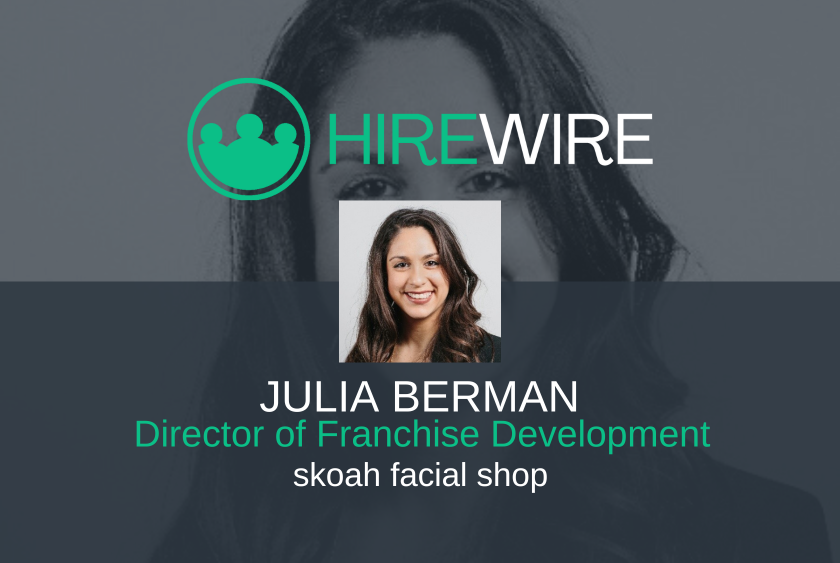 As a member of the franchising community, Berman followed REP’M Group and watched its evolution. Her opportunity to join REP’M came after it partnered with Franworth. Berman worked with Franworth for nearly 10 years in business development.

Berman was attracted to REP’M Group because of the experience and determination of its leadership team. She is excited to work with a talented group of people and believes in the tools and resources that they provide to their franchise partners. “They have the playbook. In a short time, they’ve really battled and figured out what works,” Berman said.

REP’M Group’s leadership team believes that Berman’s background will help her grow the skoah facial shop franchise. “We are very excited to have Julia join the REP’M family. We feel she will be a great fit for our group and that her talents will shine as director of franchise development for skoah facial shop,” said Nick Sheehan, co-founder and managing partner of REP’M Group.

Berman has seen what REP’M Group partnership does for prospects and franchise consultants alike. “There’s so much validation that comes with being part of REP’M Group,” Berman said. REP’M Group franchise partners include Alloy Personal Training, Ellie Mental Health , Kidokinetics, LIME Painting, and Pause Studio. As REP’M Group continues to expand, so does its leadership team. John Taylor was recently announced as director of franchise development for Garage Kings.

Berman got her start in franchising driving local marketing for franchise businesses. This experience helped her understand the franchisor-franchisee relationship. Berman enjoys that franchising gives entrepreneurs the opportunity to run their own business and allows them to form a community with other business owners.

Berman urges franchisors to keep their processes simple and effectively communicate with franchise owners. While the word “processes” can seem complicated, Berman believes that it doesn’t have to be. “It’s all about communication and working together to achieve a goal,” she said. It’s also important for franchisors to have resources for both experienced franchise owners and novices, Berman added.

Berman advises prospective franchisees to consider the goals and qualities that they want from a business. Following the system and looking into the brand’s leadership are also important, she said. Berman also notes that uncertain times, such as a recession, can be the moment to invest in yourself and control your destiny with a franchise business.

She earned a bachelor’s degree in economics and psychology from the University of Michigan and an advanced degree from the Isenberg School of Management at UMass Amherst.