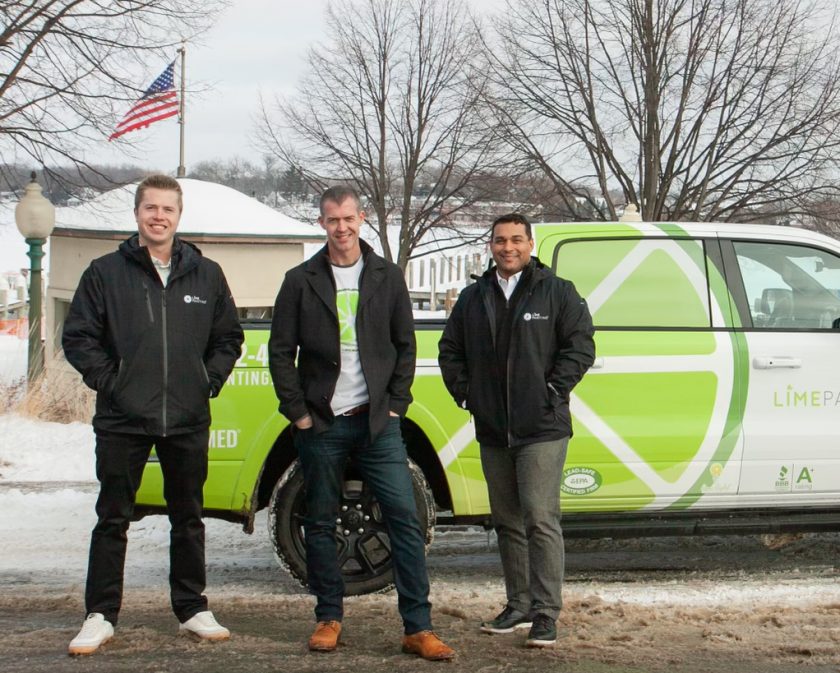 Jayme Nelson (above, center) is a natural-born leader. He even paid his way through college as the general manager of a Student Painters’ franchise. Although that was a temporary way to make money, it laid the foundation for his current role as a semi-absentee owner of LIME Painting, Minnetonka.

But even though Nelson owns a painting franchise, he still has a day job. In fact, he has no plans of leaving it. Since graduating college, he has enjoyed a successful 23-year-career in the medical device industry. He plans to keep his current job and use some of his spare time (about 10 hours a week) to manage the franchise.

By hiring a general manager (Jermaine Schulte, above right) and a salesperson (Pierce Erickson, above left), the day-to-day aspects of running the business (such as scheduling jobs and managing the team of painters) are taken care of. Nelson focuses on behind-the-scenes work like bookeeping and payroll. However, the first three months of ownership demanded more of his attention, which averaged about 20 hours a week. “There was a lot to do during the start-up phase,” he says.

Nelson opened for business January 2021, and says his location is growing and well underway. He cherry-picked his Minnetonka, Minn., location for its multimillion-dollar homes, fitting right into LIME’s high-end demographic.

Nelson was attracted to LIME for many reasons, including the company’s core values. The name is an acronym for Love, Integrity, Mission, Excellence. “I really liked LIME’s values-based culture,” he says. Nelson was also impressed with LIME’s processes, technology, marketing and low investment. “It all made sense.”

Nelson says that selling a high-end painting service is not hard. “Our team comes in collared shirts with detailed proposals and top-quality materials. We are restoring our customers’ biggest asset. They are happy to pay more for a job well done,” he says.

What Food Franchises Does Shaquille O’Neal Own? 58033