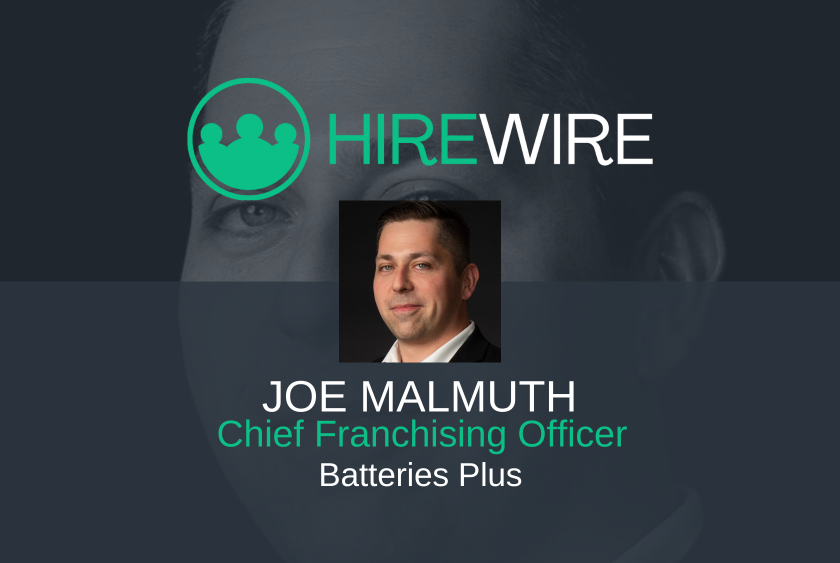 Malmuth will Oversee the Entire Batteries Plus Franchise System, Both Internationally and Domestically

Batteries Plus, a battery, light bulb, key fob and repair franchise, promoted Joe Malmuth to Chief Franchising Officer. In this new position, he will oversee the battery retailer’s entire franchise system, both internationally and domestically. Malmuth previously served as vice president of franchise development for Batteries Plus and brings more than 15 years of experience to the role. This promotion comes as Batteries Plus continues to grow.

“In the two-and-a-half years since joining Batteries Plus, I have seen the brand grow exponentially. Our growth has been through the addition of new, enthusiastic franchise owners, expansion and development of our current owners and a very successful resale strategy, all of which have helped expand our presence across the country. It has been a very exciting time in our brand’s history,” Malmuth said in a statement.

Batteries Plus is attractive to Malmuth because of its commitment to putting the success of the franchisee first. “It’s really our top priority. From top to bottom, this organization lives and breathes that mission. This made it a very easy decision when Batteries Plus first reached out to me.”

“Joe, Vic and Brandon are truly top-notch franchise development professionals and their recent promotions are very well deserved,” Jon Sica, Chief Strategy and Development Officer for Batteries Plus, said in a statement. He adds that the “franchise development team has put us on a continued track for another record-breaking year of growth so far in 2022, and we are confident we will end the year on an even higher note.”

Malmuth has always been interested in entrepreneurship and looked for ways to turn that into a career. “A dear friend of mine was working for a large, multi-branded franchisor and mentioned they were looking for someone to manage their inside sales team and lead generation program – both of which were in my wheel house.” His favorite part of the industry is helping people achieve more freedom in their lives through entrepreneurship.

As Batteries Plus’ vice president of franchise development, Malmuth worked with new franchisees and franchise consultants to expand the brand. He also managed programs that assisted franchisees with facilitating transactions and developing territory. Additionally, he secured deals with franchisees from different backgrounds, including sales, finance, and the food service industry.

Prior to joining Batteries Plus, Malmuth was vice president of franchise relations at My Eyelab, an optical retail franchise. He also worked at United Franchise Group, a corporation that develops franchise concepts, as vice president of franchise development and regional vice president. Malmuth is involved with the International Franchise Association and is a board member with the Titus Center for Franchising at Palm Beach Atlantic University. As a board member, he mentors members of the franchise community and advocates for greater franchisor transparency.

Previous ArticleCalifornia Food Tax Could Soon Come to a State Near YouNext ArticleContent Marketing 101: How to Reach Out to Your Audience