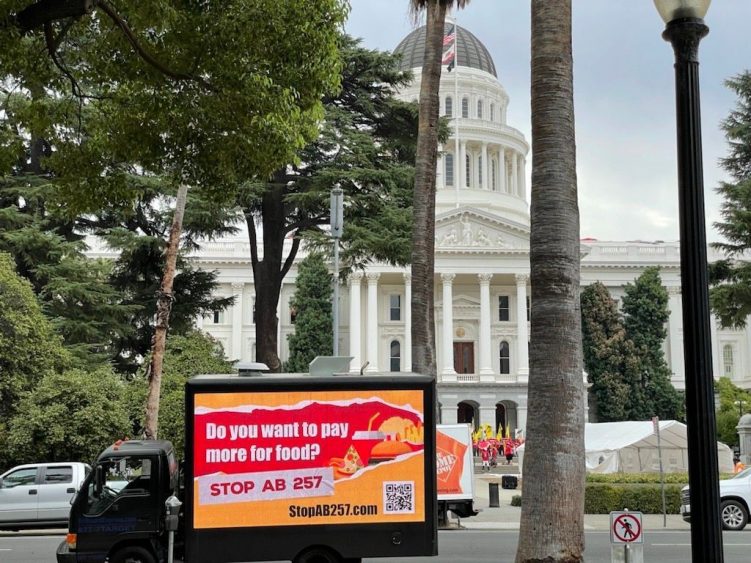 Amid record job growth, Americans are still struggling to make ends meet. Credit card debt skyrocketed 13% in the second quarter of 2022, the biggest gain in over two decades, as people turn to debt to balance their budgets. Economists are still bracing for the worst as inflation remains near record highs and supply chain issues persist. Despite the unprecedented financial strain, California Governor Gavin Newsom recently signed into law a bill that effectively amounts to a food tax and is expected to increase prices for working-class families by double digits.

This bill, known as the FAST Act, uses tax dollars to create a Fast Food Sector Council that has near full authority to establish blanket standards at most fast food restaurants. The deck of this 10-member council, appointed by the governor and legislative leaders, is stacked in favor of political appointees and union representatives, ensuring the four votes allocated to the business community will be consistently overruled.

The panel could raise the hourly minimum wage across the state from the national high of $15 an hour to $22 as soon as next year and an additional 3.5% each year after. This increase would spike labor costs 60% and raise fast food prices by about 20%, according to a University of California, Riverside Center for Economic Forecast and Development study. The council could also require employers to offer paid vacation for “protest days,” among other unilateral workplace standards that will cost small business owners.

Restaurants in lower-income areas may not be able to pass these costs onto consumers, forcing them instead to reduce worker hours or lay off employees altogether to recoup costs.

Even amid record inflation, franchise brands and owners have avoided increasing prices to deliver on their promise of value for customers. Unfortunately, this new law will likely be the straw that breaks the camel’s back due to price increases, putting tremendous stress on low-income households that rely on these inexpensive food options. Restaurants in lower-income areas may not be able to pass these costs onto consumers, forcing them instead to reduce worker hours or lay off employees altogether to recoup costs.

Impacts of the FAST Act

The law covers fast food chains with 100 or more locations nationally and encompasses franchisees who own just a single storefront. Even before the bill was signed into law, many restaurant owners told us they were putting expansion plans on hold due to the immense costs they will be forced to incur in a short period of time. Michaela Mendelsohn, the owner of six El Pollo Loco locations in Los Angeles, told us she paused plans to grow her group of restaurants due to the bill. Others are weighing a move out of the state altogether.

A coalition of restaurant owners, including the International Franchise Association, is moving to block the new law, and let voters decide whether it should go into effect in the 2024 election. With less than one-third of Californians in support of AB 257 and California’s own Finance Department opposing its passage, voters deserve to have a say through a referendum as to whether they are willing to accept the financial cost this law will impose on them.

California and the FAST Act

California is often the brainchild of overreaching progressive policy that then spreads across the country, so it’s little surprise proponents of the FAST Act are already focusing their attention on other states. Service Employees International Union President Mary Kay Henry recently said she hopes the bill will inspire similar measures across the U.S., which should concern both small business owners and consumers nationwide.

By signing this bill into law, Newsom chose special interests over Californians.

Unfortunately, this entire effort is predicated on the assumption that the fast food industry is entirely unique and different from other subsectors of the food service industry. While working at counter service restaurants can be difficult and challenging, proponents of this measure have yet to produce any evidence detailing why the fast food industry is being singled out in their efforts. This is all the more dumbfounding when data has shown that the percentage of wage claims filed against this segment of business is lower than its share of the California workforce.

By signing this bill into law, Newsom chose special interests over Californians. I have heard repeatedly from franchisees who do not know how they will be able to keep their doors open once this bill goes into effect. Underrepresented communities will be hit hardest. Unfortunately, California is likely only the beginning as proponents of this measure take the effort to other states. We will continue to stand by small business owners and American consumers to ensure other states do not suffer the harm the Golden State has started.

Jeff Hanscom
Jeff Hanscom is Vice President, State & Local Government Relations & Public Policy, for the International Franchise Association. He leads the association’s advocacy efforts at the state and local levels across the country, representing the franchise community in state houses and before city councils.

What Food Franchises Does Shaquille O’Neal Own? 58088

The Rise, Fall and Reinvigoration of Friendly’s 11598