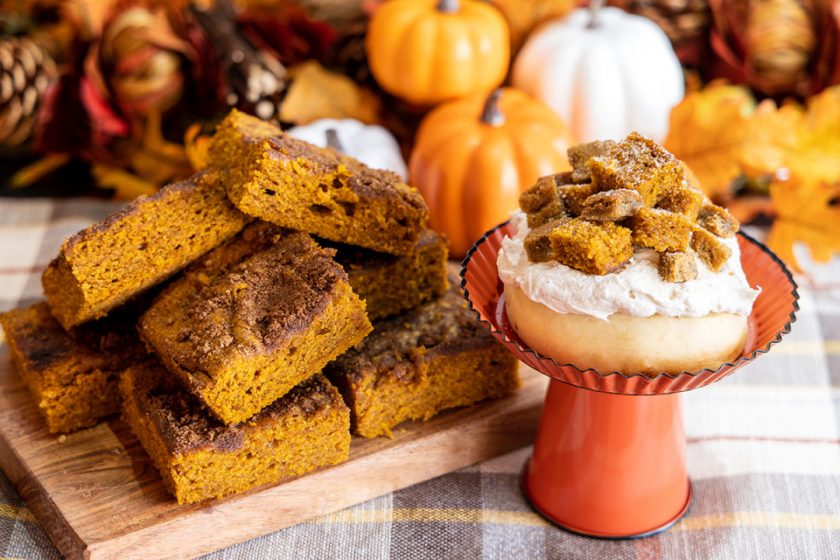 From Chia Pudding to Smoothies and More, Franchise Brands are Going Big with Pumpkin Spice

Franchisors are stepping up their pumpkin spice games this fall. From chia pudding and muffins to donuts and smoothies, you can find more than just pumpkin spice lattes on the menus of many fast-casual franchise brands this fall. And if you think that pumpkin spice season comes earlier and earlier every year, you’re right. Although fall doesn’t officially start until Sept. 22, franchise brands like Dunkin’ and Scooter’s Coffee have rolled out their fall menus with fan favorites and new, limited-time-only options as early as the beginning of August.

Pumpkin spice is so popular these days that it was even added to the Merriam-Webster’s Dictionary. The dictionary defines pumpkin spice as “a mixture of usually cinnamon, nutmeg, ginger, cloves, and often allspice that is commonly used in pumpkin pie.” Americans go so nutty for pumpkin spice that scientific research has been done on it. According to a theory by researchers from Johns Hopkins University, positive memories of autumn – warm sweaters, falling leaves – can be associated with the tastes and smells of pumpkin spice. When used effectively, this association can keep customers coming back to franchises for pumpkin spice products all season long.

If you are craving pumpkin spice this fall, here are franchises where you can get your fix.

Cinnaholic recently rolled out its limited time only fall menu of seasonal fan-favorites. These include the Carnival Crunch Roll, which is topped with caramel frosting, popcorn, marshmallows and sprinkles; Pumpkin Bread (above), which contains brown sugar and cinnamon mix; and the Pumpkin Spice Roll, which is made with Cinnadoodle cookie bites, cinnamon dust, and pumpkin bread. For the month of October, Cinnaholic will also offer the Savoy Pizza Roll, which is made with marinara, mozzarella and cheddar shreds and then topped with more cheese and marinara.

Pumpkin is on the menu at Clean Juice. The organic juice brand rolled out four new items for fall. For a limited time only, customers can enjoy the Pumpkin One smoothie, which contains banana, pumpkin pie spice, vanilla, pumpkin, almond milk, and maple syrup. The Pumpkin One can be combined with cold brew coffee for that added boost of energy. Customers can also satisfy their pumpkin craving with the Fall Bowl, which blends acai with banana, pumpkin, pumpkin pie spice, almond milk, and maple syrup. This seasonal treat is topped with granola, banana, and pumpkin seeds. Clean Juice’s fall menu is rounded out with the Apple Cider One smoothie, which blends apple juice with pumpkin pie spice, banana, cinnamon, and maple syrup.

For a limited time only, IHOP is adding pumpkin pancakes to its menu of everything fall, spice, and nice! This delicious breakfast item is a pumpkin spice pancake that is made with seasonal and pumpkin spices. It wouldn’t be an IHOP pancake if it wasn’t topped with whipped cream!

This smoothie franchise is getting into the pumpkin spice game with five pumpkin smoothies for the fall. According to a press release from Smoothie King, all five smoothies are made with organic pumpkin and have their own nutritional value. For example, the Slim-n-Trim Pumpkin Low-Calorie Smoothie has all the benefits of a pumpkin spice treat with less of the downsides. And health-conscious customers will love the Vegan Pumpkin Smoothie. For coffee lovers looking for a protein-filled, festive fall drink, look no further than the brand’s Pumpkin Coffee High Protein smoothie, which contains cold brew coffee, almonds, nonfat milk, and a protein blend.

Dunkin’ never disappoints during pumpkin spice season. Never one to miss a trend, the coffee franchise comes up with new items on its fall menu every year. New additions to this year’s fall menu include the Blood Orange Dunkin’ Refresher and Nutty Pumpkin Coffee. For a limited time only, other fan-favorites are back, including the Pumpkin Spice Iced Latte, Maple Sugar Bacon Breakfast Sandwich, Pumpkin Spice Cold Brew, and bakery items, like the Pumpkin Muffin and Pumpkin Munchkins.

Another franchise giving customers pumpkin to talk about is 7-Eleven. In celebration of fall 2022, the convenience retailer brought back two fan-favorites: the Pumpkin Spice Latte and Pumpkin Spice Coffee. These pumpkin treats go perfectly with any fall activity.

Pumpkin isn’t only on the menu at coffee or dessert franchises. A burger joint with pumpkin-infused options is McDonald’s. The burger giant’s pumpkin dessert is great for those who love pumpkin pie topped with whipped cream. While McDonald’s did release its Pumpkin and Creme Pie in 2020 and 2021, customers are waiting with bated breath if it’ll be brought back this year. But McDonald’s fans with a pumpkin spice craving don’t have to wait for Pumpkin Spice Lattes.

Craving a Pumpkin Pie Blizzard? Dairy Queen (DQ) has got you covered. For a limited time only, DQ dazzles with its Pumpkin Pie Blizzard, which is a combination of vanilla soft serve of real pieces of pumpkin, which is then topped with whipped cream and nutmeg. This pumpkin pie treat will be a great addition to any fall event on your calendar.

Pumpkin can be enjoyed in more than just coffee and smoothies. At the Bagel Grove franchise, customers can start the morning with a pumpkin bagel. Through October, the bagel franchise will have this seasonal bagel on its weekly specials menu. No matter how you top it, pumpkin is enjoyable in all forms.

Chicken franchises are also getting in on the pumpkin trend. Chicken Salad Chick brought back its Pumpkin Cheesecake for a limited time only. This tasty fall treat goes perfectly with the chicken brand’s new Chicken Poblano Soup, which is a creamy blend of chicken and diced peppers, with roasted corn, lime and black beans.

Another pizza franchise getting creative this pumpkin spice season is Cicis. For a limited time only, the pizza brand is offering Pumpkin Spice Cinnamon Rolls as part of its “Endless Pizzabilities” marketing campaign. This new fall dessert features the pizza franchise’s first-ever flavored icing, which offers notes of clove, nutmeg, and cinnamon. Cicis fans can order this fall treat on the MyCicis app through the end of October.

The Menchie’s Frozen Yogurt franchise has pumpkin spice on the menu. Customers can try the Pumpkin Spice Made with Nilla Wafers flavored frozen yogurt. This fall treat contains no artificial colors, real cinnamon and nilla wafers, and is lowfat. Allergens to be aware of are eggs, milk, soy, and wheat.

A burger joint where you can get your pumpkin spice fix is MOOYAH Burgers, Fries and Shakes. For a limited time only, customers at participating MOOYAH locations can enjoy the Pumpkin Spice Shake. This fall creation is a blend of ice cream, which is mixed and topped with graham cracker crumbs with pumpkin spice. This delicious treat can be enjoyed through Nov. 6.

For the fall, Rush Bowls is bringing back its Pumpkin Spice Bowl. This fall creation combines pumpkin, banana, cinnamon, frozen yogurt, nutmeg, graham cracker, and a milk of the customer’s choosing. It is topped with honey, granola, cinnamon, and one free topping. Customers will find that this healthier fall treat goes well with any autumn activity they do.

The Beyond Juicery + Eatery franchise has rolled out a new menu for the fall. These items include the Almond Butter Pumpkin Smoothie, which blends pumpkin and pumpkin spice, almond milk, almond butter, maple syrup, apple, and banana. It wouldn’t be autumn without the juice brand’s Spiced Cider, which is made with fresh apple, ginger, lemon, and cinnamon. Beyond’s Cactus Chili, a sweet and spicy classic vegetarian-friendly chili made with real cactus, is back with a new and improved recipe. Customers can also enjoy the juice franchise’s Zen Bowl. This fall treat is a wild rice and quinoa bowl with roasted sweet potatoes, smoked shiitake mushrooms, kale, pickled red onions, tomatoes, carrots, sesame seeds, and fresh herbs. It is finished off by pouring vegetable pho broth on the top and served with sambal hot sauce on the side.

A coffee franchise that released new pumpkin spice items earlier than expected is Ellianos Coffee. For a limited time only, customers can enjoy Ellianos’ new Pumpkin Pie Latte and Pumpkin Chai Latte. A fall item making a comeback this year is the Pumpkin Cream Cheese Muffin, which pairs pumpkin and spices with tangy cream cheese.

In honor of pumpkin spice season, the 16 Handles franchise partnered with Oatly to release pumpkin spice non-dairy soft serve. This new creation will be available for a limited time only as one of 16 Handles’ two oatmilk-based flavors offered year-round.