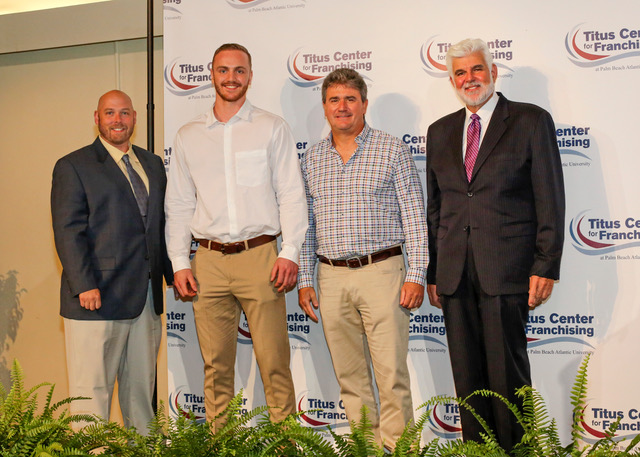 Cole Sossamon, (above, second from left) a 2020 alumnus of Palm Beach Atlantic University’s Titus Center for Franchising, has received the center’s first Kobel Franchise Challenge. Sossamon will receive a $130,000 loan to buy a Talem Home Care franchise, an in-home care business, in Nashville. He plans an Aug. 1 opening.

Titus Center for Franchising Director Dr. John P. Hayes (above, far right) said Palm Beach Atlantic is the only university with a fund established exclusively for lending to students or graduates who buy franchises. “The Kobel fund makes business ownership possible sooner rather than later for students who meet our lending criteria,” Hayes added. Ed Kobel, (above, second from right) president and chief operating officer of DeBartolo Development, and his wife, Becky, set up the fund.

A prerequisite for Kobel Challenge loans is that applicants’ course of study must have a concentration in franchising. Palm Beach Atlantic alumni and students may apply for loans of as much as $300,000 under the program, with each loan going to a corporation formed in the name of the both the recipient and the Kobel Challenge itself. The challenge holds a 15 percent ownership share in the challenge recipient’s business for at least five years, after which the franchisee can acquire that share. The Titus Center will retain 5 percent ownership.

Sossamon was awarded the challenge on Wednesday, April 28, at a Titus Center Advisory Board meeting. Sossamon said he’s purchasing the Talem Home Care franchise because of the personal connections he felt after speaking to Talem CEO Jake Rankin (above, far left) and other people involved with the franchise; Rankin, from Colorado, attended the presentation in Florida. While evaluating three or four other franchises before settling on Talem, Sossamon said he felt that the Titus Center for Franchising had given him a solid background for assessing his options.

I really want to help people help themselves.

Kobel award recipients are expected to operate their franchises in a way that puts their faith into action. Kobel and other business leaders will mentor challenge recipients to help them overcome any obstacles they encounter. Sossamon is pleased that Kobel will assist him, and he wants his business to aid Nashville residents who are struggling financially. “I really want to help people help themselves,” he said.

Before the award presentation, Kobel addressed a chapel service, telling Palm Beach Atlantic students about the importance of abiding in God. He was reared in a non-religious environment, but learned to follow Christ under the guidance of Christian businessmen many years after leaving home. Kobel was among a small group of evangelical CEOs who has endeavored to teach business leaders how to abide in God. They studied and read the Bible and journaled as part of their training. Kobel Challenge recipients are required to follow that same path in operating their companies.

Palm Beach Atlantic University is a private, independent university offering undergraduate, graduate and professional degrees in West Palm Beach, Orlando and online. The school incorporates Christian principles as it teaches students about business as well as how to lead and serve others.

About the Titus Center for Franchising

The Titus Center for Franchising was founded in 2017. The specialized center resides in the Rinker School of Business at Palm Beach Atlantic University in West Palm Beach, Fla. Titus Center students complete 12 credit hours to earn a concentration in franchising as part of their business degrees in either marketing or management.

The center was established to teach about franchising and prepare students to become employees of franchise companies, franchisees and franchisors. Ray Titus, founder and CEO of United Franchise Group, endowed the center with a $1.5 million gift to Palm Beach Atlantic University. For more information on the Titus Center for Franchising visit, www.pba.edu.