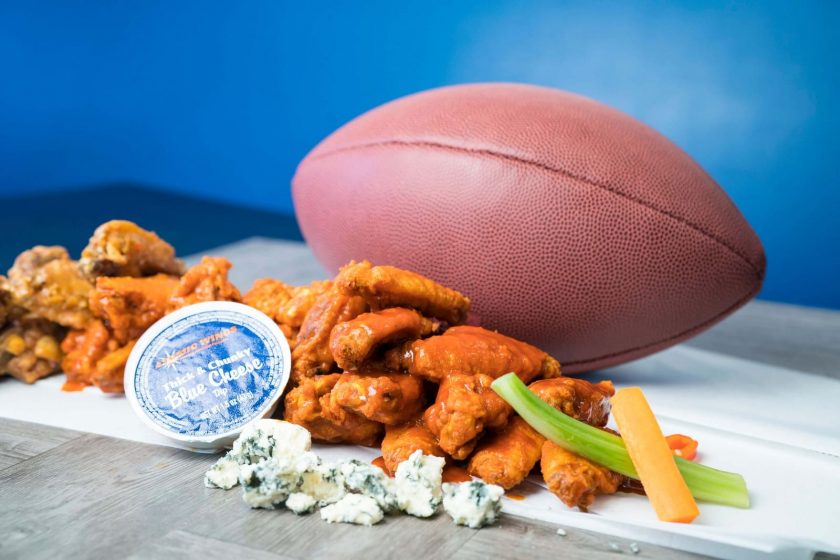 Although Football Fans Will Eat Billions of Chicken Wings on Super Bowl Sunday 2022, the Top Wing Franchises are Busy All Year-Round

With Super Bowl Sunday 2022 quickly approaching, wing franchises will be busier than ever. Football fans will be cheering for their favorite teams, enjoying the half-time show, watching fun commercials, and inhaling loads and loads of sticky and delicious chicken wings. An estimated 1.42 billion wings will be consumed during the Big Game, according to the National Chicken Council’s (NCC) 2022 Wing Report. But wing franchises are not just for the Super Bowl. They are popular all year long. A favorite of sports fans, college students, and anyone who wants to dig into a not-so-healthy but super-fun treat, wings are America’s go-to crowd-pleasing party fare.

For a long time, deep-fried chicken wings have been a staple of southern cooking in the U.S. But the concept of cooking wings in hot sauce can be traced back to the ’60s with Teressa Bellissimo, who is credited as the inventor of the spicy Buffalo wing. Although there are different accounts as to how Bellissimo came up with the Buffalo chicken wing concept, she debuted the first spicy Buffalo wing at the Anchor Bar in Buffalo, New York.

During the COVID-19 pandemic, the popularity of chicken wings has increased because of the rise of carryout and delivery orders. Wing franchises have been the beneficiary of this pandemic-related increase in sales. If you’re interested in a fast-food franchise that’s not focused on burgers or pizza, wing franchises offer a fun alternative. Here are some of the top wing franchises:

Atomic Wings is a fast-casual restaurant that features Buffalo-style chicken wings that are hormone and antibiotic-free and vary in degrees of spiciness. Founded in 1989 by Adam Lippin, the brand has grown across the U.S. A location typically needs between 800 and 1,500 square feet and can be extended through delivery and off-premise dining. This allows franchise owners to cater to additional customer demands.

The WingsUp! franchise is a quick-service delivery and take-out restaurant specializing in chicken wings. For more than three decades, the brand has been serving countless customers in Southern Ontario, Canada. They set themselves apart from the competition by serving fresh, never frozen chicken. Franchise owners can enjoy serving from a simple menu and smaller location sizes that are usually between 800-1,200 sq feet, which lowers rent costs compared to other QSRs. Additionally, the brand is ahead of the curve, with 65% of its sales coming from online orders.

The concept of the Wing Zone franchise was conceived in 1991 by University of Florida students Matt Freidman and Adam Scott, who wanted more than pizza when they were craving a snack while studying late into the night. With over 40,000 students on campus, the duo had the perfect customers to test their chicken on. Since setting up shop in their fraternity house’s kitchen after hours, the Wing Zone franchise has grown to have locations in over 20 states and five countries worldwide. The franchise offers its customers wings, tenders, salads, and more. The brand offers incentives for veteran franchise ownership as a member of the International Franchise Association’s (IFA) VetFran Program.

Buffalo Wild Wings was founded in 1982 by Jim Disbrow and Scott Lowery, who wanted authentic Buffalo, New York-style chicken wings after moving to Ohio from the Empire State. Buffalo Wild Wings is known for its wide selection of flavored and sauced wings and fun atmosphere. Originally called Buffalo Wild Wings & Weck, Buffalo Wild Wings has become the largest sports bar brand in the U.S., and has more than 1,200 locations across ten countries. Franchise owners must be committed to developing at least two locations and have a net worth of $1.5 million.

The Wings To Go franchise opened in 1985 opposite Dover Air Force base. It began franchising four years later and has grown to more than 40 locations across the South, Southeast, and Mid-Atlantic U.S. The brand is known for its wings with varying degrees of wing sauces to choose from: mild, medium, hot, extra hot, and suicide. There’s even a “homicide” option that promises to make even the most experienced hot wing eater cry.

The Wings Over franchise was founded in 1999 in Amherst, Mass., and has grown to have a cult-like following. The brand offers sweet or spicy options. In addition to wings, Wings Over’s menu also includes sandwiches, wraps, salads, and sides. The company has expanded with its 2.0 model, which began with Dan Leyva and Delectable Capital buying the wing franchise and changing its website, logo, design, and more. Franchise owners can expect to invest between $250K – $600K and have locations that are 1,300 – 1,800 square feet.

The WingBasket franchise says they offer the best wings and sauces at the best price. The “never out of the jar” menu features WingBasket’s sauces that are made at each location and chicken that is fresh. The emerging franchise brand keeps the menu simple with just chicken wings, tenders, and sandwiches along with sides made fresh to order. Prospective franchise owners can expect an estimated total investment of $242,000 – $354,000.

Founded in 1979 by native New Yorkers Floyd and Judy Anderson, Native Grill & Wings is a wings franchise known for its family-friendly environment. The company says their customers enjoy an environment that’s a little more laid back, a little less loud, a lot more kid-friendly. The concept for the brand was conceived after the couple moved from New York to Arizona with their daughter. After opening an unsuccessful pizza restaurant, Judy had the idea to change the concept to a wings restaurant. Fast forward to 2014, and the brand found success in Arizona and updated its name and logo from Native New Yorker to Native Grill & Wings. The brand is looking to expand and has locations throughout Arizona, Illinois, and Texas. The franchise will provide prospective franchise owners with excellent training and support as a member of the FAT Brands family.

Founded in 2011 by entrepreneur Matt Ensero, Wing It On! launched its franchise operation in 2014. In addition to wings, Wing It On! sells buttermilk-fried chicken sandwiches, wraps, salads and unique side items. The official sponsor of the 2021 U.S. Chicken Wing Eating Competition, the wing franchise serves fresh, never frozen chicken wings made to order. With the popularity of food delivery services, the brand offers online ordering, a mobile app and delivery services. The franchise offering includes smaller-footprint restaurant locations and food truck options. Wing It On! is a member of the VetFran Program.