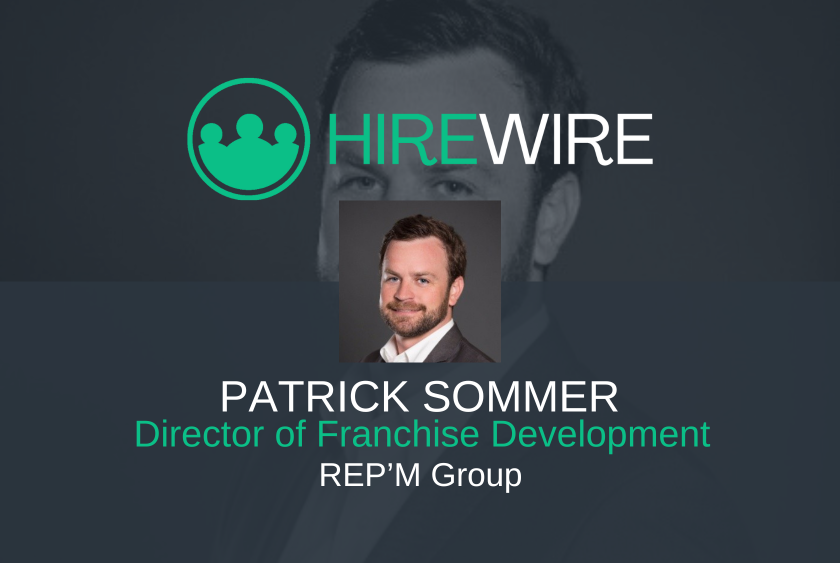 The people and culture attracted Sommer to REP’M Group. “I have had the privilege of working with many members of the REP’M leadership team in the past, and I can say most of what I have learned about franchising has come from my past experiences with them,” he said.

Sommer is excited to work for a team-focused company. “Whether it is different verticals within REP’M or the many brands that team members represent, everyone is working together to support each other. It is easy to see how great the culture is from the outside, and I’m thrilled to be a part of it,” he adds.

REP’M Group’s leadership team thinks Sommer is a great fit for the job. “I could not be more excited to welcome Pat to the team. His background and experience in franchising will greatly benefit our team. He will also bring tremendous value to the LIME Painting concept, which he will head up!” said Nick Sheehan, co-founder and managing partner of REP’M Group.

In Sommer’s view, REP’M Group will positively impact the future of franchising. He is excited that REP’M helps individuals become franchisees and assists emerging brands scale through franchising. “There are many great concepts out there, but often companies struggle to break into franchising and that can lead to mistakes or failure. With REP’M, these emerging brands have full-service support to successfully turn their concept into a nationwide franchise.”

Lessons from the Military

For five years after college, Sommer was an officer in the U.S. Army. To him, there are many similarities between the army and franchising. “At a high level, you have people coming from very different backgrounds but share common values and must work together to achieve a goal. Also, in both, there is structure and support to help individuals and the team succeed.”

During his time in the U.S. Army, Sommer worked for different leaders and led a diverse group of soldiers, which has helped him in franchising. “Recognizing what motivates people, how to support them, and understanding what their goals are critical in both the military and franchising.”

For veterans looking to get into franchising, they shouldn’t be afraid to take risks, he said. “Transitioning out of the military can be difficult for many people, myself included. There is so much structure in the military that the idea of being your own boss can obviously be overwhelming.” Similar to many veterans, Sommer struggled to relate his military experience into the civilian sector.

When he first left the military, he was approached by a franchise consultant, and after one conversation he told her that franchising wasn’t for him. He was worried that he wouldn’t be able to succeed as a business owner having only served in the military, but that was before he took the time to understand how much support there is in a franchise system.

“In the last seven years, I have seen so many veterans succeed in franchising because they saw the similarities in structure and support that I didn’t take the time to learn about. In the military, you are assigned a role and receive training; once properly trained, you join an organization and work as a team to achieve a goal. For the most part, franchising is the same model but with the freedom to achieve much greater personal success.” His military experience has translated to a successful career in franchising.

Sommer’s first experience in franchising was in 2015 with Driven Brands, a corporate franchisor of automotive brands. He knew very little about franchising at the time and was unaware of how many franchise opportunities were out there. “I spent the first three months on the job traveling the country visiting franchise owners from many of the brands within the company.”

Sommer quickly recognized the difference between franchise owners and his past experiences with corporate employees. “Despite coming from diverse personal and professional backgrounds, there was a shared passion among all the owners who I met that I hadn’t experienced in previous corporate environments.”

In his down time, Sommer enjoys hiking, surfing, golf or almost anything outdoors. He set a goal this year to hike the highest point in all 50 states. He has done this in eight states so far.