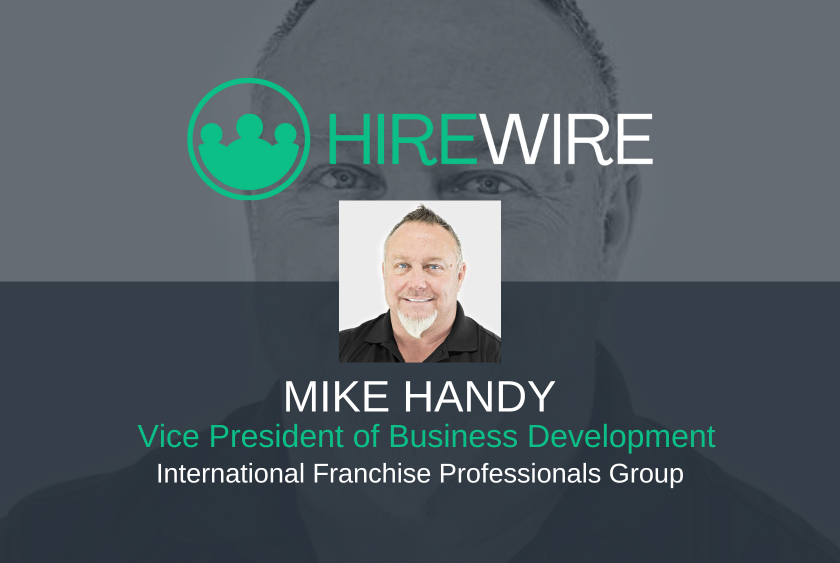 The International Franchise Professionals Group (IFPG) announced Mike Handy as its new vice president of business development. With this role, Handy will focus on IFPG’s business development and sales. He will also secure new contracts and consult with management regarding the overall monetary health of the organization.

Throughout his seven years with IFPG, Handy served as interim vice president of operations and was the head Certified Franchise Consultant Trainer. Handy’s promotion is part of the company’s expansion plans initiated by its strategic partnership with Princeton Equity Group, a private equity firm that partners with franchisors and multi-unit businesses. In addition to Handy’s promotion, IFPG recently announced a new executive vice president of operations, Matt Otskey.

“IFPG is by far the best franchise consultant and broker network in the industry. It’s been recognized with Entrepreneur Magazine’s No. 1 supplier award in the broker network category for the past four years,” Handy said.

Working with IFPG’s staff as a consultant and lead trainer allowed Handy to appreciate and understand the benefits of the franchise business model. “I am most excited about working with and learning from the team and taking IFPG to new levels.”

IFPG founder and CEO Don Daszkowski is thrilled to have Handy in this role. “Mike is a great friend and talented professional with a passion for entrepreneurship. I couldn’t think of a better person for the job,” he said.

In Handy’s view, IFPG has positively impacted franchising by qualifying and recruiting great candidates. “IFPG members all work together to grow the franchise industry by scaling franchisors, connecting quality vendors and their services to franchisors and franchisees, and giving resources to the best franchise consultants in the industry.”

Handy adds that the franchise broker network focuses on helping franchisors and franchise consultants grow by generating leads and branding through its companies. IFPG companies include Career Transition Leads (CTL), NurtureAssist, and Franchise Consultant Magazine. His former role as interim vice president of operations for CTL will change considerably, Handy said. “My role before included managing call center employees [as well as] software and data management to ensure that the tasks of creating great leads were efficient and effective.” As vice president of business development, Handy can “focus on building relationships in the industry and marketing those quality leads to franchise consultants in need of quality call verified leads so they can grow their consulting businesses.” Handy has seen positive changes at IFPG over the years and enjoys its inclusive culture.

Handy’s favorite aspect of the franchise broker network’s culture is its commitment to doing what is right for IFPG members. “Franchisors are able to reach the next level by utilizing vendors and franchise brokers to sell more franchises and scale their brands. IFPG Franchise Consultants use the resources to help their candidates become franchisees, typically next leveling them from a job worker to a business owner with more earning potential and more freedom to live the lifestyle they want.”

In Handy’s view, IFPG Franchise Consultants are able to improve their consulting business and revenue by working directly with the best franchises and funding sources in the industry. This allows them to “reap the benefits of earning lucrative referral fees in a fast-growing and thriving industry.”

Handy appreciates that IFPG’s Annual Retreat allows industry members to come together. “Every detail is meticulously thought-out, from who you sit next to, to the food and drink, to the presenters and the location. The event is designed for networking, learning, and growing — all in a beautiful but professional atmosphere.”

Handy got his start in the industry with a restaurant delivery company called Orderup.com, which was in the process of being franchised when it got acquired by a publicly traded company. In 2004, Handy was involved in a start-up called Restaurant Delivery USA and sold a business opportunity that helped people start their own restaurant delivery services. Over five years, Handy sold and opened over 100 locations. He also started GoWater and partnered with Homes and Land Magazine, a company that had been franchising for over 30 years and had more than 300 franchises.

For those interested in getting into the industry, Handy advises having strong leadership and problem solving skills and being motivated to grow a business. “[Ideal candidates] are good with sharing some part of the revenue, as long as the franchisor has already created the model that works and is willing to teach and support it on an ongoing basis.”

For franchisors, empowering franchisees to grow and profit from the business model within their local communities is paramount. “There really isn’t a better way to grow and scale your business, as long as you have already mastered your model and are ready to teach it to others.” Outside of franchising, Handy enjoys sports and was the offensive coordinator for an arena football team.