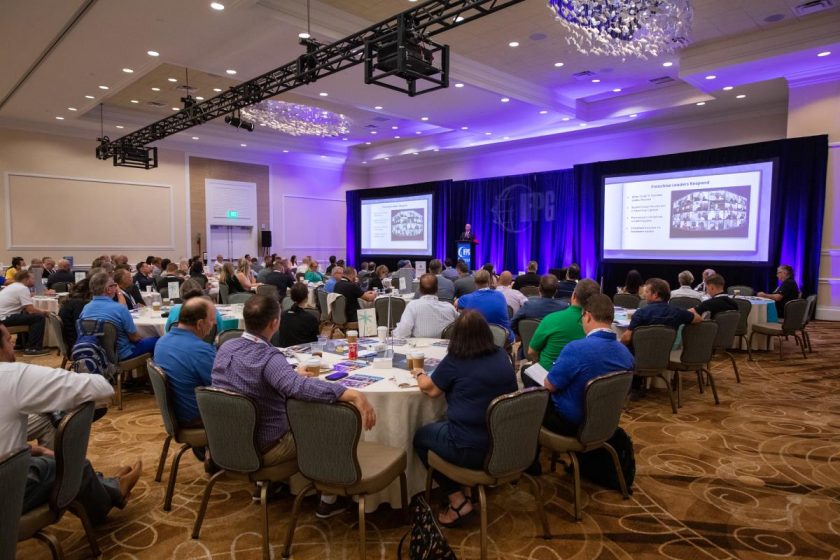 One of the unique ways IFPG connects its members is through structured speed networking. Similar to speed dating, speed networking gives franchisors and franchise consultants a fast-paced opportunity to get to know each other. Here’s how it works: Tables are set up for each franchisor. At each 8-minute session, franchise consultants sit with different franchisors to learn about their brand and ask questions. At the end of each session, IFPG Consultants are instructed to move to the next table. “This gives our consultants a systematic way to get to know each brand,” says Daszkowski.

Daszkowski says that assigning franchisors and consultants to specific tables helped Retreat attendees maximize their time and exposure. “At typical networking conferences, people tend to sit in cliques, which defeats the whole purpose. We designed our event to prevent that,” he says. “By the time the 3-day Retreat was over, each franchisor had the opportunity to meet face-to-face with just about every consultant… and there were well over 100 consultants attending.”

Besides being assigned to specific speed networking tables, attendees were also assigned breakfast and lunch tables. “This way, everyone sat with different people throughout the event.” He explains that there were plenty of other opportunities throughout the Retreat to mix and mingle with everyone, including a fun rooftop cocktail party and a dinner cruise along the Intercoastal. “It took a lot of planning to get it right, but it was well worth it.”

In addition to networking, the IFPG Retreat offered many opportunities to learn and share best practices. There were several expert panels that included many of franchising’s top players, including franchise legend John Hewitt, CEO of Loyalty Brands, and IFA President Matthew Haller.

Daszkowski says that his franchise consulting company has seen explosive growth in 2021. He attributes this success to his team, who is always willing to innovate and try new things. In 2020, IFPG launched two virtual conferences as well as virtual speed networking opportunities. IFPG also received Entrepreneur Magazine’s 2021 No.1 ranking as the leading broker network for the third year in a row. “We had a lot to celebrate this year,” he says.

The theme of the 2021 Retreat was #lifechanger, changing lives one franchise at a time. Daszkowski says that theme was twofold. “We wanted to recognize how much has changed in the last two years, celebrate franchising’s resilience and also highlight what we all do…change lives for the better through franchise ownership,” he says.

Although IFPG thrived through the pandemic, Daszkowski says that the heart and soul of the franchise consulting company is its face-to-face, in-person events. “We are so happy to be able to bring everyone together again,” he says. To see more photos of the 2021 IFPG Retreat, click here.