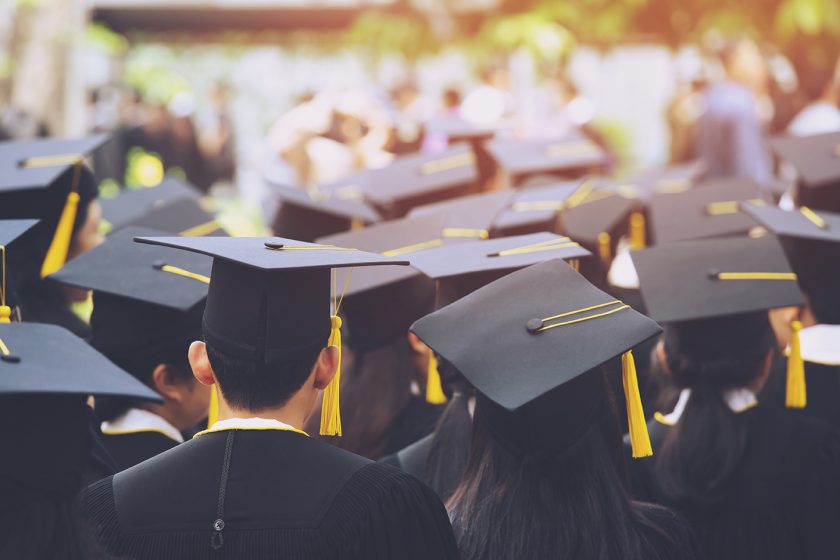 College graduations are around the corner and commencement speakers are being announced. My daughter will have finished her first year of college in May and it is hard to believe that a year ago we were wrangling with the college decision process. Early on we warned her that we would not allow her to go deep into college debt. After all, she wants to be an elementary school teacher. The average yearly tuition with room and board for out-of-state colleges is in the neighborhood of $40,000. We luckily saved some money in a 529 over the years but told her that whatever we had was it and she was responsible for the rest. We encouraged her to look at schools that would not sink her financially and luckily, she listened.

Going away to college is new to both my husband and me. We had families that could not afford that experience, so we attended our local community college. Then, our companies paid for our bachelor’s degrees at a four-year university. The result? We had zero college debt which was a great start for our marriage.

September 2021 brought news that Amazon was providing free tuition for most of their 750,000 workers to retain employees in a tough job market. In February 2022, Dolly Parton announced that Dollywood would provide free tuition and books to any of the 11,000 employees who wanted to pursue further education. Google, Tesla and Apple have aligned themselves with other companies that no longer require a college degree. That decision opened up the applicant pool and made it more diversified.

College was never meant for everyone. Franchising offers a great alternative and, in many ways, poses a much greater chance for success. Compared to a college education that could cost hundreds of thousands of dollars and not even guarantee a job, franchising comes with a proven system for success. Of course, it isn’t foolproof and franchisees do fail. But generally speaking, if you pick the right brand and work hard, you are likely to do well.

Franchising is also different because it offers a level playing field. Unlike corporate America, there is no discrimination in franchising. It doesn’t matter if you had an Ivy League education or none at all, franchise owners come from every socio-economic background and are becoming more diverse as each year passes. Passion, financial requirements, and a willingness to follow the system are all that are needed to get a stake in business ownership.

At one time, 90% of Domino’s franchise owners were once drivers and entry-level workers for the company. Their management trainee program rewards hard work and encourages their employees to one day have an ownership stake in the company. Makes you wonder how their issues with labor compare to other companies when employees know out of the gate that they have the potential to become management and own their very own company. Just this week, I met two women that applied for Chik-Fil-A ownership, and both were sadly turned down. I wrote an article about how incredibly hard it is to get in on this lucrative business but once again they rely heavily on their employees to fill these highly sought-after roles.

There are parents who have given their children an attractive graduation suggestion. They can have money to start a franchise or go to college. The most famous story about this is Mark Zuckerberg’s. As we all know he chose to go to Harvard and right out of his dorm room started Facebook. How different life would be for the world had he opted for the McDonald’s franchise that his father offered to purchase for him.

Many colleges now offer programs in franchising. In fact, I was recently invited to speak at my alma mater, Rider University, and present franchising to entrepreneurship students. I reviewed the history of franchising but focused on many of the strong reasons why so many are drawn to the franchise concept. Lacking experience in a specific industry is not an issue with franchising since the franchisor provides comprehensive training and coaching. In fact, many systems prefer that you not do not have that experience. A good example is Fibrenew. They want to mold the owner to their system and mode of training. Who is their ideal candidate?

My candidates truly want to build a legacy for their families and do not see a path to do that in their corporate positions. I have met franchise owners in their mid-to-late twenties who have incredibly successful franchises, and I am blown away by their tenacity. Seems like such a scary risk especially if you have a young family. But when I ask them about that risk they usually say: “if not now then when?”

There is no ideal time to take a deep dive into business ownership. Each stage of life is fraught with concerns. When you are younger, the mistakes that are made do not seem as crippling, especially as when you face college tuition for your own children or retirement. Another important area is work-life balance. Millennials and Gen Z have been outspoken about not wanting to repeat the work patterns that they witnessed with their own parents. The pandemic only solidified that notion with the norm of remote-working opportunities. There is no doubt that owning a franchise is hard work. However, it is your destiny to control and as the business becomes more established those long work hours will lessen with time.

Right before the pandemic, investors were warning that the next financial bubble that was expected to burst was student loan debt. Waving away student debt with a magic wand is not a good answer for the short-term or the long-term. Luckily, many private companies are taking steps toward finding solutions. In the meantime, making the decision to send a child to college is a daunting process. Remember that there are other choices out there like franchising — especially if your kid does not have a specific career in mind. What do you have to lose?

“Some people get an education without going to college. The rest get it after they get out.”
– Mark Twain

Previous ArticleSupport and Mission Attracted This Phoenix Entrepreneur to the LIME Painting FranchiseNext ArticleThe Rise, Fall and Reinvigoration of Friendly’s

What Food Franchises Does Shaquille O’Neal Own? 34542

Why is Chick-fil-A Better Than McDonald’s? 5626