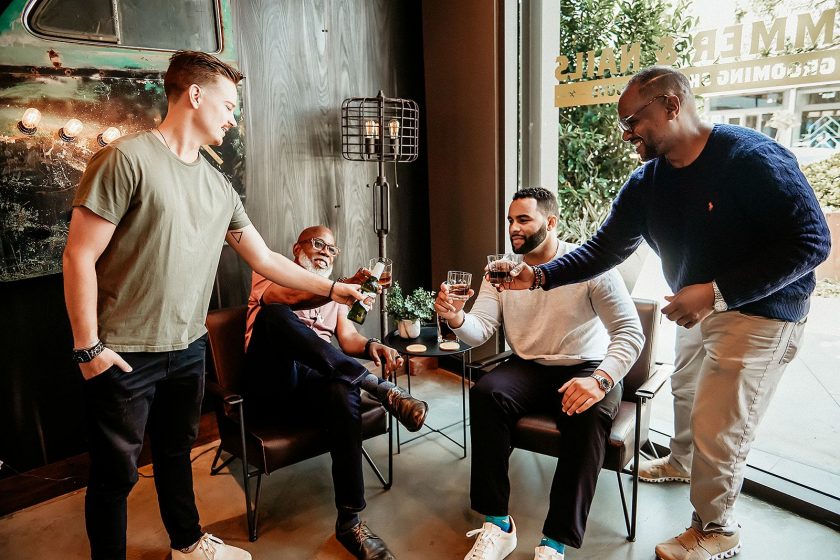 The Hammer & Nails franchise has capitalized on a onetime void in the personal-care space: head-to-toe men’s grooming delivered in an enjoyable environment. Services include haircuts, shaves, manicures and pedicures, a menu that’s been so well-received that 20 franchises will open in the next nine months, doubling the number of units in operation. And by the end of 2023, that number will double again, says CEO Aaron Meyers.

“Hammer & Nails was founded to un-think men’s grooming as we know it, to elevate how men look after themselves,” Meyers says. “Men are voting with their feet and wallets wherever we open, which confirms that we have built a business model that succeeds.” And what goes into business success? He rattles off this formula: “A goal executed passionately while meeting massive consumer demand equals unrivaled performance.”

Several factors figure into Hammer & Nails’ growth and fandom, both in the shops and on social media, Meyers says. “We are the only complete men’s grooming business franchise in the country. Our shop ambiance is second to none. Our recurring subscription model provides consistent revenue to franchisees. We have our own line of grooming products. Most important, the demand for what we bring to market is huge. Men are hungry for a place built for them, which shows in the shop results.”

You’ve got to nail it before you scale it. You need processes and systems that are proven before you think of franchising.

But demand alone can’t sustain a franchise, Meyers contends. “Your business is not ready to franchise if you can’t get an average franchisee to succeed. You’ve got to nail it before you scale it. You need processes and systems that are proven before you think of franchising. Also, hire for where you want to be, not where you are. Lastly, you need an experienced franchise team that can lead your business confidently into the future.”

Hammer & Nails underwent many tweaks as a prelude to franchising, and Meyers insists that change will continually infuse Hammer & Nails’ progress. “We will stay relentlessly focused on refining a business that delivers a world-class complete grooming experience in an environment that makes all men relax and smile. We will also continue to partner with the best franchisees. Together we will no doubt grow to over 1,000 shops nationwide.”

Hammer & Nails, which has headquarters in Folsom, Calif., is currently seeking franchisees in the United States and Canada as well as in other countries. Hammer & Nails franchisees should be enthusiastic about men’s grooming services and set high standards for customer care.

Hammer & Nails encourages multi-unit ownership. “The best vote in confidence you can have as a franchisor is when your franchisees choose to open a second shop,” Meyers says. “We are obsessed with delivering value to our franchisees for the royalties we receive, and that value combined with excellent results equals more shops.”

For more information about the Hammer & Nails franchise, visit https://hammerandnailsfranchise.com.

Previous Article10 Reasons Why I am Thankful for FranchisingNext ArticleBlack Friday 2022: Fast-Food Deals and Promotions