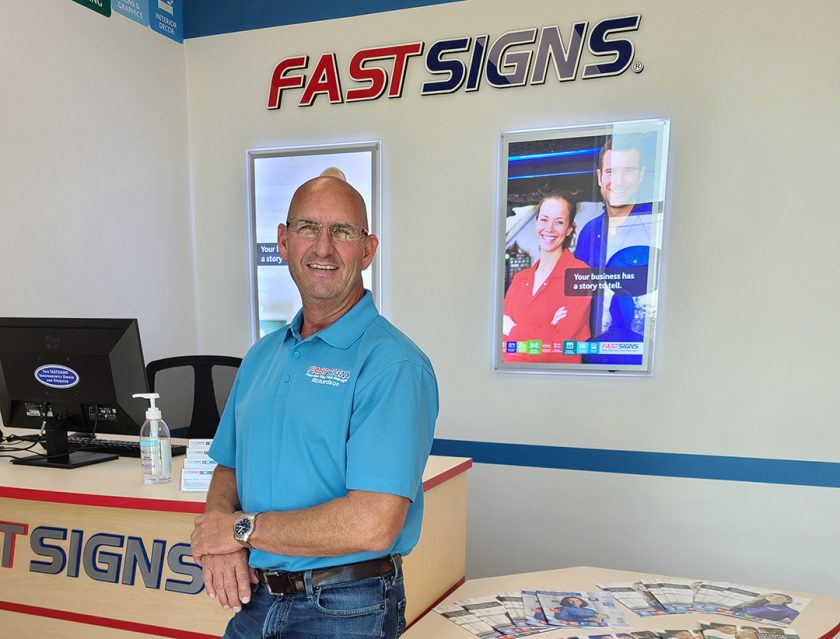 FASTSIGNS Has a Track Record of Helping Veteran Franchisees Succeed

More than a year into the pandemic, the rapidly changing landscape has presented numerous uncertainties for every small business owner. But two things have remained consistent for FASTSIGNS® franchisees across the globe: the increased demand for communication for businesses and unparalleled support from their franchisor.

With a proven business model, international brand recognition, and exceptional training and support, FASTSIGNS has remained on the cutting edge of its industry. While the level of hands-on involvement and franchisee support that FASTSIGNS has provided to franchisees through these unprecedented times remains remarkable, the brand has also been recognized for its exemplary leadership in supporting franchisees for decades.

Army veteran Darrin Lawrence sought to tap into the experiences and skill sets he acquired while serving in the military and apply them to creating a prosperous business venture. Through his research, he learned about the franchise business model and eventually found FASTSIGNS International, Inc. While he didn’t have experience in signage, he loved that the FASTSIGNS franchise opportunity has a proven track record of helping veterans go into business for themselves, but not by themselves, to create a fulfilling life and career. Today, Lawrence owns and operates a FASTSIGNS center in Richardson, Texas, alongside his wife, Mary.

Lawrence was also blown away by the amount of support FASTSIGNS’ franchisees receive. He was confident that as he grew his business, FASTSIGNS would always be by his side.

FASTSIGNS is known in the industry for equipping its franchisees with training and tools vital to securing the ongoing success of each location. FASTSIGNS has more than 120 support staff, boasting a support ratio of 1:6 in North America, the largest of any sign franchise.

Amid the pandemic, the FASTSIGNS leadership team fought for the centers across the United States to be deemed as an essential business and succeeded in doing so. Their support allowed Lawrence to open his doors seamlessly in July 2020 despite businesses across the country temporarily shutting their doors. FASTSIGNS’ support and leadership helped lay the foundation for him to transition smoothly into his new role as owner and operator.

Today, FASTSIGNS has more than 750 independently owned and operated FASTSIGNS centers in nine countries. For prospective franchisees looking to be part of the brand, FASTSIGNS offers a special incentive for veterans and first responders, including paramedics, emergency medical technicians, police officers, sheriffs, and firefighters, which includes a 50 percent reduction on the franchise fee—a savings of $24,875.

What Food Franchises Does Shaquille O’Neal Own? 58070