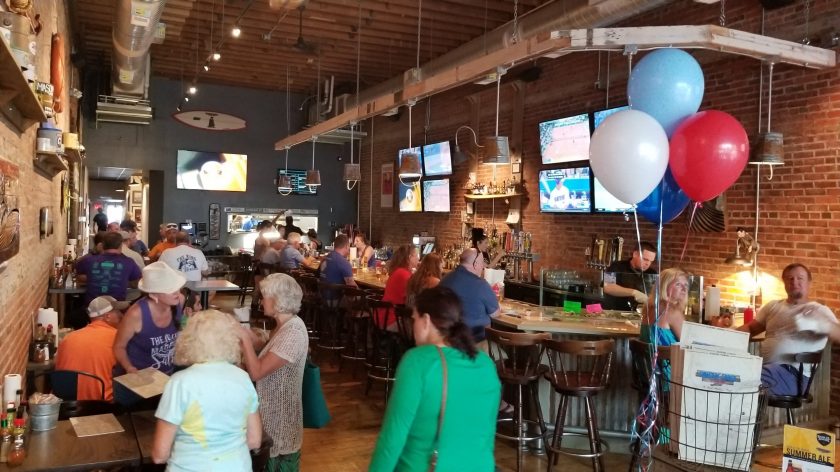 With Year-Round Appeal, Sports Bars are not Just for March Madness and the Final Four

Throughout March Madness, millions of college basketball fans spent time at their favorite sports bars to enjoy food, beer and watch the games. But sports bar franchises aren’t just popular during big events like the Final Four games or the Super Bowl. They are popular all year-round because they provide sports fans (and non-fans) with a sense of community.

There are also downsides to consider.

Here is a look at some of the top sport bar franchises.

The Shuckin’ Shack Oyster Bar franchise (top photo) offers a fun dining experience with a family-friendly beach bar vibe. The laid-back sports bar was founded in 2007 in Carolina Beach, N.C. by seafood enthusiasts Matt Piccinin and Sean Cook. Since opening its first franchise location in 2015, Shuckin’ Shack has expanded across the country. Franchisees can worry less about common restaurant ownership problems like supply chain and cost control since the company has figured out creative ways to manage these issues. Shuckin’ Shack also appeals to the social-conscious customer because of its commitment to sustainability. Prospective candidates can expect an initial investment of $352,700.

The Boston’s Pizza Restaurant & Sports Bar franchise is a family-friendly sports bar franchise. Despite its name, it actually started in Edmonton, Canada, and also has locations across the U.S. and Mexico. Prospective candidates should keep in mind that they can convert an existing property into a Boston’s franchise location, which will save them time and money. Additionally, you can set up non-traditional locations in places like airports, military installations, casinos, theme parks, and more. The franchise will also provide you with support and training, which includes marketing tools and site selection assistance.

The Bar Louie franchise is part of the “gastropub” revolution. With hipster vibes that are aimed at Millennials, it does cater to sports fans, as well, and has a menu full of flatbreads, burgers, sandwiches, salads, and more. It was founded in 1990 and began franchising in 2006. It has grown to more than 70 locations across the U.S. The ideal Bar Louie franchise owner has prior restaurant experience, a desire to be part of the community, and is hard working. Those who frequent the franchise come to to have fun with friends, eat and watch the game.

The famous Hooters franchise may be known for its scantily clad waitresses, but it is still a place to enjoy the big game and have some food and drinks with friends. It was founded in Clearwater, Fla., in 1983. It has a beach theme and a menu that includes burgers, salad, sandwiches, chicken wings, and more. The brand has expanded to more than 430 locations in 28 countries. Franchise owners must establish at least three restaurants in a development territory and have multi-unit ownership experience — or at least a business partner that does.

Similar to Hooters, the Tilted Kilt Pub & Eatery franchise puts the sex appeal of its waitresses at the forefront of the business. But the Scottish-themed sports bar franchise is also a place where you can enjoy watching the game in a fun environment. Customers can enjoy fish and chips, shepherd’s pie, and more. It was founded in 2003 and began franchising three years later. According to the company’s website, the initial investment is between $887,000 – $2,868,000 and the franchise fee is $75,000.

The Beef ‘O’ Brady’s Family Sports Pub franchise feels like an Irish pub but with a family-friendly atmosphere. The brand was established by Jim and Jeanette Mellody in Brandon, Fla., in 1985. Franchise owners are supported by a franchise advisory committee and a regional franchise consultant to assist with the growth of the business. Burger Mondays, Taco Tuesdays, Wing Wednesdays, Fajita Thursdays, and Seafood Combo Fridays make up the franchise’s daily specials.

The Twin Peaks franchise is a mountain-themed sports bar that lives by its mantra: “Eats. Drinks. Scenic Views.” Like Hooters, the waitresses are dressed in scantily-clad clothing and offers plenty of screens to watch games. The brand is known for pouring beer into frosted mugs at 29°F. This causes ice crystals to form at the top of the glass. Since its founding in 2005, Twin Peaks has grown to 83 locations in 25 states in the U.S. and Mexico. The franchisor is seeking qualified multi-unit investors and has a site requirement of 6,000- 8,000 square feet.

The Arooga’s Grille House & Sports Bar franchise is for the true sports fan. Its locations have almost 100 screens and themed areas based on the different sports. But what really sets them apart is that they serve gluten-free, organic, and plant-based options. Vegetarians can enjoy the restaurant’s plant-based burger or faux wings. A location’s footprint ranges between 6,500-9,500 square feet. The franchise follows the standards of the Green Restaurant Association. This includes not using styrofoam, utilizing its energy systems to reduce its carbon footprint, using environmentally-friendly chemicals, and more.

The Greene Turtle Sports Bar & Grille franchise was founded in Ocean City, Md., in 1976 by Tommy Dickerson and ​​Steve Pappas. The franchisor is looking for passionate multi-unit investors with management experience. In addition to the usual sports bar offerings like beer and burgers, a great revenue stream for the franchise owners is Greene Turtle’s popular t-shirts. The franchise is experiencing growth in East Coast states, including New Jersey, Delaware, Pennsylvania, New York and West Virginia. The estimated initial investment for a location is between $1,455,000 to $1,757,500. The franchise gives back through its Funds 4 Friends Fundraising Tool Kit, which gives resources to community organizations to raise funds.

The Bout Time Pub & Grub franchise is a sports-themed, full-service bar that offers specialty drinks and more in a family-friendly atmosphere. Joe and Paula Fraser, the franchise’s founders, conceived the idea for the business when they wanted to open a place without the vibes of a “big box” sports bar franchise. Bout Time Pub & Grub’s first location opened in 2009 in West Jordan, Utah. Prospective franchise owners can expect an initial investment of between  $400,000 – $500,000. Locations range from 3,000-4,000 square feet and can be found in high-traffic areas like strip malls.