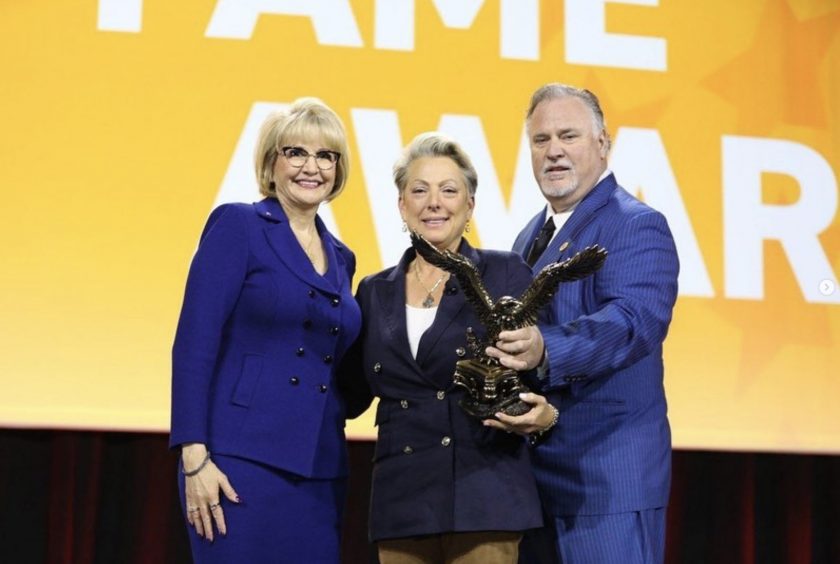 Dwyer-Owens is Recognized for Servant Leadership

The International Franchise Association has named Dina Dwyer-Owens, former chairwoman and CEO of Neighborly, as the recipient of the organization’s 2021 Hall of Fame Award. “Throughout her career and in all the ways she gives back, Dina Dwyer-Owens exemplifies a servant leader whose impact on franchising will be felt for generations,” IFA President and CEO Matthew Haller said in announcing the award. “She is a trailblazer in the business world and has used her success to provide opportunities to others – what franchising is all about.”

Presented at the IFA’s 62nd annual convention in San Diego, the Hall of Fame Award recognizes the honoree’s actions on behalf of the industry via franchising programs, groundbreaking enhancements in franchising, and work that benefits the IFA. The IFA Hall of Fame Award is the oldest honor given by the organization and its highest one. Dwyer-Owens’ receipt of the honor is precedent-setting in two ways: Her father, Don Dwyer, previously had received the award, so her honor makes them the first father-daughter duo to be recipients; she also is the first individual woman who will be inducted into the IFA Hall of Fame.

“My three pillars in life have been my faith, my family and franchising,” Dwyer-Owens said. “As I enter this prestigious community of Hall of Fame recipients, I do not do so alone or on my own merit, but by the grace of God with the many outstanding mentors, colleagues and friends who helped show me the way. To be recognized for helping this industry in return is the gift of a lifetime.”

Dwyer-Owens is known for adhering to well-defined core values and for building a winning team across service brands that propelled the Waco, Texas-based Dwyer Group (now known as Neighborly) and franchising overall to a national and international level. Since its founding in 1981, the business has evolved into a holding company for 21 brands, many of them geared to provide services to homeowners, such as Five Star Painting, Molly Maid, Mr. Rooter, Mosquito Joe and Dryer Vent Wizard.

In her work with the IFA, Dwyer-Owens has been chairwoman of the IFA Board, chaired the VetFran Committee and served the IFA Foundation. She also has received two other significant IFA awards: the 2001 Bonny LeVine Award, which recognizes women who are role models for all (and particularly for women) because of their achievements in franchising and in benefiting society as a whole; and the 2011 Crystal Compass Award, which is given to people whose leadership has significantly enhanced their franchise organization, the franchise industry and/or the community where the individuals live.

Dwyer-Owens has led Neighborly for 15 years. She has authored two books “Live R.I.C.H.” and “Values, Inc.,” she champions the philosophy of leadership within a strict ethical code. The Texas resident is a wife, mother and grandmother within a growing family.