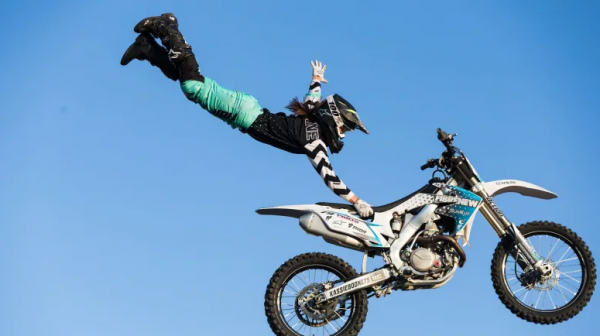 Kassie Boone is one of only two women in the world who jumps 75 feet on a bike and performs Superman feet grabs, heel clickers and switchblades.

She is a pioneering freestyle motocross (FMX) rider, touring this world with Monster Jam. And since she’s been competing for the last decade and a half, the now-29-year-old has had a longstanding sponsor: Fibrenew, the leather, plastic and vinyl restoration repair franchise her father Blair Boone runs in her hometown of London, Ontario.

“When Kassie was five, she turned to me and said she wanted to ride professionally when she grew up,” Blair Boone said. “I would take her older brother and her to events — it was a family thing. She just caught on and loved it.”

Fibrenew, founded in 1985, prides itself on being a flexible model that provides franchise owners the tools they need to grow their territory while offering them a business opportunity that helps them build a legacy and support their families. Blair Boone’s franchise has done just that.

“We’re so impressed with Blair and the support he gives to his incredibly talented and amazing daughter Kassie,” said Michael Wilson, CEO of Fibrenew. “Blair embodies all that makes our franchise family so great — our owners are dedicated people serving their communities and also the ones they love.”

For more information about the Fibrenew franchise, visit fibrenew.com

What Food Franchises Does Shaquille O’Neal Own? 39656

Why is Chick-fil-A Better Than McDonald’s? 6407