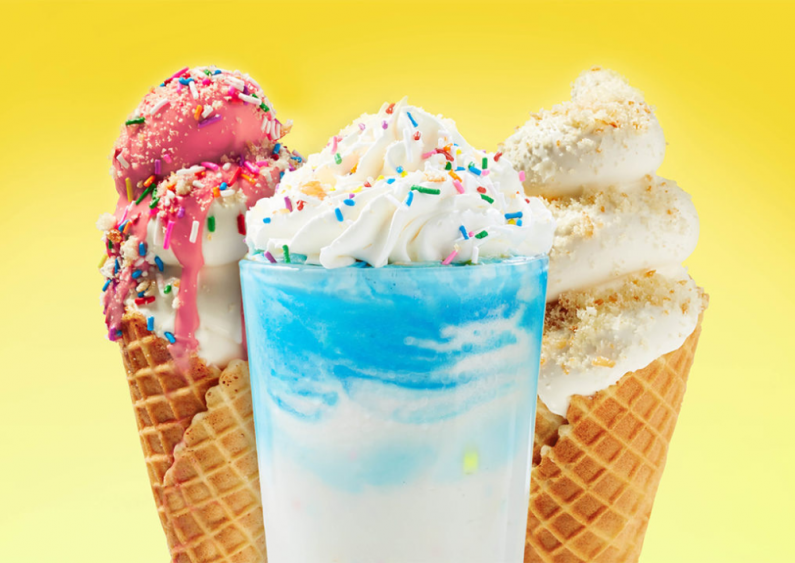 You scream, I scream, we all scream for Krispy Kreme doughnut-flavored ice cream? Yes, the Charlotte, N.C.-based franchise already is dishing up Original Glazed Soft-Serve Ice Cream in Southeastern U.S. cities and will add more sites in coming weeks. (Never fear, though, doughnuts will stay on the menu.)

Chief Marketing Officer Dave Skena told The Charlotte Observer that Krispy Kreme has been developing the recipe, conducting marketing research and testing the doughnut-flavored ice cream for approximately two years. “Our goal at Krispy Kreme is to be the most loved sweet treat brand in the world,” he says. Our treats “make people really happy… and it’s totally consistent with who we are as a brand.”

A Surprising Treat From Krispy Kreme

The icy confection is available in cones, cups and milkshakes that can be topped with added indulgences that include dehydrated glazed doughnuts. The seven milk shake varieties are Birthday Batter, Chocolate Iced, Coffee and Kreme, Cookies & Kreme, Lemon Filled, Original Glazed and Strawberry Iced Sprinkled.

The brand previously sold hard-pack ice cream in 2019 at limited locations, but the pandemic squelched further ice cream dreams for a while. This time around, Krispy Kreme leadership opted for soft ice cream, partly because it’s speedier to serve.

The Observer stated that all Charlotte-area Krispy Kreme stores offer the glaze-flavored ice cream along with a couple of other stores in the Carolinas. Krispy Kreme locations in other states will start dishing in the next few days, according to The Observer: Norfolk and Newport News, Va.; Charleston, W. Va.; Nashville and the Tri-Cities area in Tennessee; and San Antonio. After that, shops in Alabama, Florida, New Orleans, Missouri and Kansas are in the queue to start selling the ice cream treats, according to RestaurantBusinessOnline.com.

Previous ArticleWhile Franchisors Benefit From Pink Money During Pride Month, They Can Be Allies All Year LongNext ArticleThe Team Behind FranFund Empowers Women to Succeed in Small Business