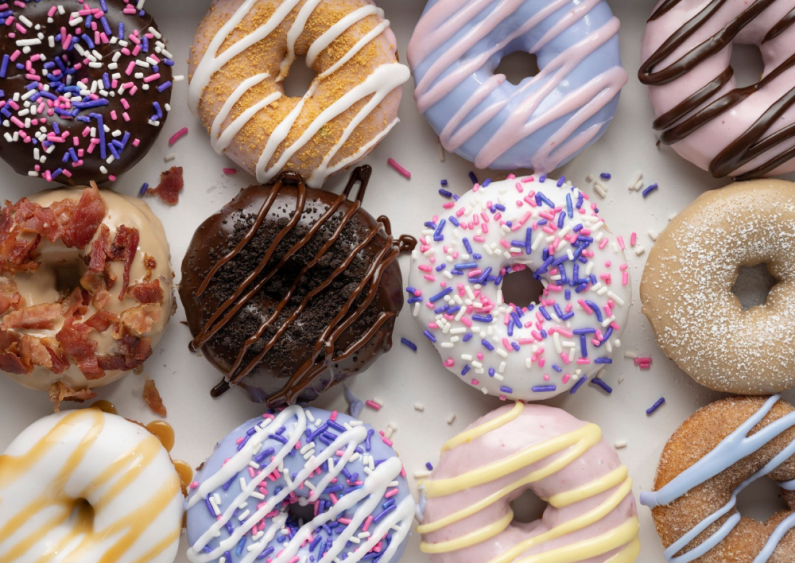 There are Pros and Cons to Running a Doughnut Business. Here are 10 Tempting Franchise Opportunities to Consider.

Doughnut franchises like Krispy Kreme and Dunkin’ are some of the most recognizable brands in the world. Countless franchise brands have sprung up as a result. Today, doughnut shops are a billion-dollar industry responsible for over 100,000 jobs in the U.S., according to IBISWorld. Doughnuts are so popular that there’s even a holiday associated with them — one that many doughnut franchises celebrate with giveaways and special promotions.

On the first Friday of June, we celebrate National Doughnut Day, a fun holiday founded in 1938 by the Salvation Army to raise funds during World War One. Doughnuts were given out to provide the troops with sustenance during a time when cooking was difficult. Volunteers who gave doughnuts to the troops were known as “doughnut lassies.”

These days, doughnut franchises offer free doughnuts to celebrate this holiday. Many entrepreneurs have enjoyed success by opening doughnut franchises. But is opening a doughnut shop a good investment? Before considering this investment, it is important to think about the pros and cons.

Benefits of Investing in a Doughnut Franchise

Downsides to Owning a Doughnut Franchise

Duck Donuts started on the Outer Banks of North Carolina. It is famous for its hot, made-to-order doughnuts. The doughnut franchise also offers coffee, breakfast sandwiches, ice cream, and more. Since opening its first franchise location in Williamsburg, Va., in 2013, Duck Donuts has grown to 100 locations across the U.S. Duck Donuts franchise owners have multi-unit ownership opportunities and non-traditional location options, like food trucks. The doughnut franchise has also given back to the community by partnering with the Gabe’s Chemo Duck Program, a non-profit organization that provides education and comfort to sick children.

When it comes to the top doughnut franchises, Dunkin’ might be the first one that comes to mind. The globally recognized doughnut franchise has it all: coffee, breakfast food, sandwiches and of course, doughnuts. Dunkin’ shops have any doughnut that you can imagine: From glazed to powdered and Boston Kreme to chocolate frosted. Franchise owners can choose from stand-alone stores or non-traditional venues such as airports, stadiums, hospitals, and grocery stores. Dunkin’ also raises money for needy children through its Joy in Childhood Foundation. Dunkin’ offers veterans a 20% discount off the franchise fee for their first five traditional restaurants.

Over the years, Krispy Kreme has amassed a cult-like following. Since 1937, the doughnut franchise has sold coffee and treats like its signature hot original glazed doughnut. Other items on the menu include coffee and specialty drinks. In addition to its franchise locations in the U.S., the North Carolina-based doughnut company has more than 700 stores in Asia, Mexico, the Middle East, Puerto Rico, and Turkey. Initial investments depend on the type of location you have and range from $275,000 – $1,911,250, with a franchise fee of $50,000. Krispy Kreme also sells merchandise, adding another revenue stream.

In 2013, Kas and Tim Clegg opened Hurts Donut Company just a day after making their first doughnut. They learned how to make the doughnut from YouTube videos, bought their equipment on Craigslist, and had $7 to their name. Over the years, Hurts Donut Company has grown to dozens of stores across the U.S. The doughnut franchise is known for its more than 70 varieties of oversized specialty doughnuts, which include English Gentleman, Fruity Pebbles, and Maple Bacon. Additionally, Hurts Donut Company’s Bite Club has exclusive free doughnut offers.

Founded in 2012, Doughnuttery has delighted donut lovers with fresh mini doughnuts in some of New York’s most iconic markets and food halls. The doughnut franchise sets itself apart with its proprietary sugar blends made with high quality local ingredients. Doughnuts are made in front of the customers and offer over 100 flavor possibilities that keep customers coming back for more. Doughnuttery offers single and multi-unit franchise opportunities and has a business model with three revenue streams: in-store sales, delivery, and catering services. The initial investment between $175,400 – $321,700.

The Donut Experiment was originally founded as Anna Maria Donuts in Anna Maria, Fla., by Shawn and Cecilia Wampole in 2012. The Wampoles were inspired to go into business when they noticed that their favorite vacation spot didn’t have a doughnut shop. The doughnut franchise’s menu includes special doughnuts, such as Key Lime and Sriracha. Customers see The Donut Experiment’s doughnuts made right before them, which increases transparency. Franchise owners enjoy exclusive territories and a semi-absentee model.

Originally called Cinnamini Donuts, DonutNV was founded by Alex and Amanda Gingold in 2014. The Gingolds decided that corporate America wasn’t for them and didn’t like the 9-5 grind. After the excellent feedback they received from their original Philadelphia location, they took the business mobile to give out their doughnuts at weddings and birthdays. Since then, DonutNV has been delighting customers with hot mini doughnuts and fresh lemonade. DonutNV awarded its first franchise in 2019 and allows franchise owners to have full-time or passive ownership.

In addition to offering made-to-order donuts, breakfast sandwiches, and coffee, Factory Donuts strives to create a fun, inclusive culture. Prospective candidates should align with the doughnut franchise’s values of pride, passion, commitment, and seeking fulfillment. Factory Donuts has locations in Philadelphia, Pa., Newtown, Pa., and Wellington, Fla. The doughnut franchise offers single and multi-unit opportunities with an initial investment between $213,300 to $341,300.

Lawrence Shipley, Sr. established the quick service restaurant in 1936. For a period of time, customers could enjoy a dozen doughnuts for five cents. The doughnuts were only available wholesale, as well. Shipley Do-Nuts’ product was so successful that it began selling on the retail market in the mid-1940s. Fast forward to today, and it has grown to more than 340 locations across the U.S. Customers can enjoy the brand’s 60 varieties of doughnuts. Franchise owners with Shipley Do-Nuts are provided with flexible location options, so they can have small units in a mall or larger free-standing stores. The ideal candidate is a seasoned multi-unit franchise owner who is business savvy and aligns with the doughnut franchise’s values of integrity and hard work.

In 1973, Honey Dew Donuts was founded by Richard Bowen, who has always had a passion for doughnuts and would follow his dad to work at a doughnut shop in Massachusetts as a child. The doughnut franchise’s menu includes muffins, pastries, bagels, breakfast sandwiches, gourmet flavored coffees, and frozen beverages. The company strives to live up to its motto of “Always Fresh, Always Good” and began franchising in 1974. The New England-based company has about 120 locations in the northeast. Honey Dew Donuts offers scholarships and has partnerships with the National Breast Cancer Foundation and the Dana Farber Cancer Institute. The initial investment is between $85,000 -$735,000, depending on the type of location, which can include strip center sites and free-standing locations.