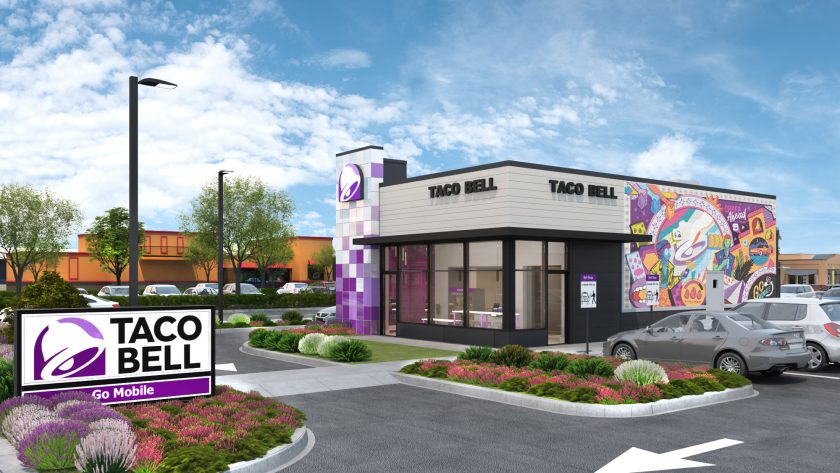 With An Innovative Brand Strategy, Taco Bell is Turning Heads and Bringing in a Whole New Fan Base

Once upon a time, Taco Bell was considered a greasy, bad-for-you fast food joint. There was an ewwww factor associated with the brand that could make even die-hard junk food lovers cringe. But times have changed and so has the fast-food franchise and its brand strategy. In fact, you could say that Taco Bell has had a major glow-up. Over the years, the company has leaned into and doubled down on its reputation for late-night fans who want to live más and may have had one (or a few) too many drinks at the bar. This can be seen in their ad campaign for the concept of the “Fourth Meal.”  They know where their bread is buttered: a cult-like following of young college students looking for a snack in the wee hours of the morning after a long night out. The brand doesn’t have a “Happy Meal” for kids for a reason.

When Christopher Ayres became the brand’s creative director, he didn’t realize how deep the love for Taco Bell went. But it’s this enthusiasm that allows the Mexican food franchise to be playful and irreverent. “I think that’s what gives us the permission to be fun,” he told The Verge. He was part of the company’s 2016 rebrand, which transformed its dated ’90s logo into something more modern. In his view, the brand’s target customer is “the eternal 25-year-old” who may have a “rebellious, disruptive spirit, but always doing it with a wink, or some awareness and humor.”

But he knows that culture changes, so being 25 years old a decade ago isn’t the same as it is today, he said. For example, young people today enjoy healthier options when they eat outside the home. Taco Bell has changed its menu as a result of this shift and its brand strategy is moving towards a cleaner, healthier identity.

As the former VP of Development and Design for Taco Bell, Deborah Brand wanted to translate the fast-food franchise’s new identity into restaurant spaces that aren’t the same everywhere. For decades, the brand has stuck to the philosophy that all of its restaurants must be the same inside and out. “The brand means many things to different people, so we threw out [the identical store concept] a couple of years ago and said, let’s strip it down and start redefining the styles that are inherently us,” Brand told RestaurantSpaces.

She and her team came up with four different design concepts: the “Modern Explorer,” which shows a more sophisticated design for the brand; “Heritage,” which is a grown-up Spanish/Mexican concept that goes back to the brand’s roots; “California Sol,”an homage to its southern California brand that has al fresco dining; and “Urban Edge,” which represents the brand’s move into urban markets.

It’s this kind of rebranding that has led to Taco Bell’s recognition as a top franchise in Entrepreneur’s Franchise 500 ranking for the second year in a row. Additionally, part of the company’s secret sauce is its ability to reinvent itself with innovative technology and products. The risk-taking of its franchise owners has also made serious contributions to the fast-food franchise’s renaissance and glow-up.

Taco Bell has a long history of listening to its franchise owners, with over 90% of the brand’s more than 7,500 global locations being franchise-owned. The company has recently come out with a new concept called Defy, an ultra-high-tech, two-story, 3,000-square-foot site with four drive-through lines, three of which are set up exclusively for mobile and delivery orders. This concept was designed to transform the mobile experience.

Taco Bell and franchisee Border Foods teamed up with Vertical Works Inc. to design Defy, the first of which opened in Brooklyn Park, Minn. Taco Bell’s president, and global Chief Operating Officer (COO) Mike Grams tells Entrepreneur, “The Defy building will be the first one in the U.S. where you see the future of what the category will probably look like. And it was not a corporate idea. It came from one of our franchisees.”

Jeff and Lee Engler of Border Foods in Minnesota came up with the idea for Defy after watching what they call “the turn-away factor.” This is the phenomenon of customers driving away when they see a long line for the drive-thru. The Englers understand that customers want more contactless options in today’s digital age, and Defy was conceived as a way to revolutionize that concept.

Necessity is the mother of invention, and the COVID-19 pandemic led to the company’s need to be as quick and efficient for customers as possible. Grams credits this idea coming from franchise owners rather than corporate employees to the fact that franchise owners are closer to the customers; thus, franchisee owners know what customers want more than corporate employees do. As Grams put it, if a company wants to go “back to normal,” it will very likely be left behind. Being ahead of the curve is a core part of the brand’s philosophy.

Before there was the Defy concept, part of Taco Bell’s brand strategy was the release of Taco Bell Cantina. The Cantina concept is an urban alcohol-serving model in 18 designated market areas and 27 cities. In a statement, Grams said, “In 2015, we created the Taco Bell Cantina concept with an open kitchen environment in urban markets. In 2020, we introduced the Go Mobile concept much earlier than anticipated with the help of quick collaboration with franchisees just like Border Foods.”

Even before the COVID-19 pandemic, the brand strived to put forward new ideas quickly and efficiently, leading to its growth and expansion. Its franchise owners are also credited with the brand’s growth, with Taco Bell U.S. being on a 14-year run of positive net new units and a 12% increase in sales during a pandemic. On top of being a fun location that sells alcohol, the Taco Bell Cantina in Las Vegas has a DJ on the second floor, and people even get married there sometimes!

A remarkable digital strategy is also part of what Taco Bell is doing right. Before the COVID-19 pandemic hit, the brand wasn’t in the delivery business, didn’t have a loyalty program, and focused primarily on dine-in restaurants and a traditional drive-thru. In response, the brand came out with its Go Mobile concept. By definition, this concept has at least one lane devoted to customers who order ahead on the mobile app in addition to “bellhops” taking orders on iPads and geofencing technology. This technology can sense when drivers arrive for faster service. This concept was so successful that the brand had 27 Go Mobile stores with plans for 93 more by the fall of 2021.

The fast-food franchise also has fun commercials to get customers to their stores. Along with Planet Fitness, Taco Bell was one of only two franchises that aired ads at this year’s Super Bowl (below). This was the brand’s first ad for the Big Game since 2017. The ad features pop star Doja Cat and pokes fun at McDonald’s.

Those featured in the ad are dressed as clowns, and there is an announcement that the ice cream machine isn’t working, which is a running joke for McDonald’s fans. It also featured Taco Bell’s hot sauce, which customers can ship to have recycled. The company has publicly committed to reducing its landfill waste and greenhouse gas emissions. Previous actions made by the company have included switching to recyclable cups and lids for cold beverages, as well as using sustainable palm oil and sustainable packaging. Gen Zers care about companies being environmentally aware, which is good for the environment and a company’s bottom line.

As part of Taco Bell’s brand strategy, it is also active on social media and is known for viral memes. Celebrities have also shouted out the brand in songs and Tweets.

Not only is the Mexican food franchise known for innovative technology, but it reinvents its menu, as well. Over the years, Taco Bell has been adding food items that they know will excite fans and keep them coming back for more. For example, at the Defy concept, fans can receive Gorditas, Chalupas, and Burrito Supremes through an innovative food lift system, Jetsons-style. The brand was also an Operator Innovation Awards finalist after releasing its Doritos Locos Tacos in 2012.

The brand is also aware that customers are generally interested in healthier, plant-based meat options. To meet this need, the brand has released the “Cravetarian” Taco, which features a plant-based protein made from chickpeas through the brand’s partnership with Beyond Meat.

With meat-free black beans, cheesy burritos, and potatoes, the brand has been vegetarian-friendly since the 1960s. Additionally, it was the first quick-service restaurant (QSR) to score American Vegetarian Association-certified menu items in 2015.

Meatless options now account for 14% of the brand’s total offerings, up from 6% in 2015. The brand has reinvented itself from its previous reputation as a place for only junk food and now has a menu with over 30 AVA-certified vegetarian or vegan options. There is also a Veggie Cravings menu for those who want to order online.

Additionally, the brand is recruiting leaders in the restaurant industry with the Taco Bell Business School, a six-week franchisee training program operated in coordination with the University of Louisville in Kentucky. Scholarships will be given to three to five aspiring restaurant owners, and the school’s first session is scheduled for February. Participants in this accredited program, which is supported by the Yum! Center for Global Franchise Excellence, will learn the fundamentals of franchise ownership and vital skills like human resources, financing, and marketing.

As the No. 1 franchise on Entrepreneur’s Franchise 500 ranking for the second year in a row, other food franchises can learn a thing or two from what Taco Bell is doing right. Compared to other food franchises, Taco Bell has quickly improved its mobile ordering system and listens to its franchise owners, who have significantly contributed to the brand’s expansion and success with innovative ideas like Taco Bell Defy and Taco Bell Cantina. As one of the U.S.’ top Mexican QSRs, Taco Bell is a force to reckon with a great menu of options that will make any fan come back for more.

What Food Franchises Does Shaquille O’Neal Own? 58300

The Rise, Fall and Reinvigoration of Friendly’s 11788