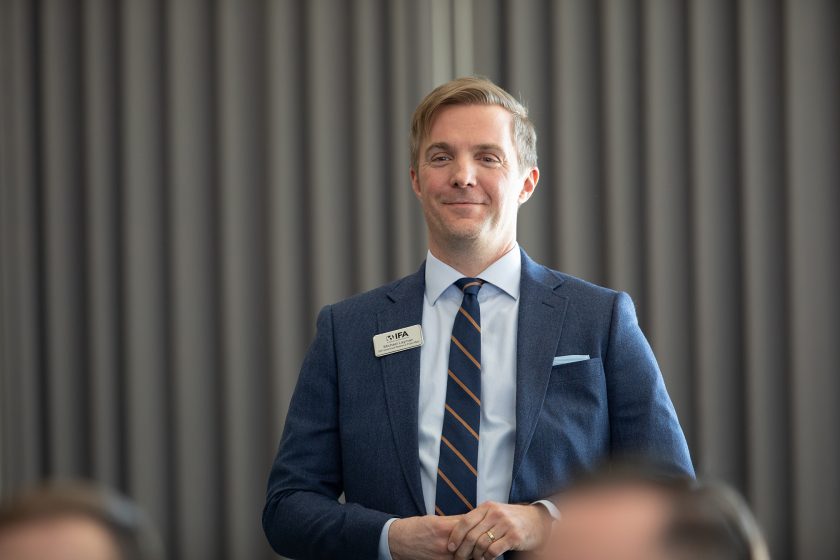 Michael Layman describes the International Franchise Association (IFA) as the sword and shield of the industry. As IFA’s Senior Vice President of Federal Government Relations, he is on the frontlines of IFA’s daily fight to protect the industry. “My job is to make the path as clear as possible for franchise brands to grow,” he says.

The Capitol Hill vet took over Matt Haller’s former role at IFA in August 2022 when Haller was named president and CEO. Just like Haller, Layman rose through the ranks of the IFA (he started in 2015) and is a dedicated advocate for the franchise model. Both Layman and Haller were recognized as top lobbyists in 2021 by The Hill, a Washington, D.C., newspaper and digital media company.

Along with Haller and the IFA team, Layman has scored some huge wins for franchising. Most notably, blocking David Weil from securing a top Labor Department post. Weil’s support of joint employer rules threatened to make franchise brands responsible for labor actions by their franchisees.

Weil’s nomination was President Biden’s first to be defeated on the Senate Floor. “This was highly unusual for Congressional leadership to bring an agenda item to the Floor and have lawmakers vote it down,” says Layman. “These votes rarely — if ever — fail. Senate leaders typically make sure a nomination like this will pass before valuable Senate Floor time is used.” The March 2021 vote was defeated with 53 opposed to 47 in favor. “Because of all the tough press that came out as a result of Weil’s defeat, it is likely to be the last upset we see like this,” Layman said.

There wasn’t much suspense about how things would have turned out if Weil’s nomination passed through the Senate.

An esteemed professor from Brandeis University, Weil was more than qualified for the post. Even though he served in the same position under the Obama Administration, three Democratic Senators (Joe Manchin of West Virginia and both of Arizona’s senators, Kyrsten Sinema and Mark Kelly) joined Republicans in opposing his nomination.

Layman says Weil’s defeat is historic for franchising. “Weil has been a notorious critic of franchising,” Layman says. In Weil’s book, The Fissured Workplace, Weil argued that franchisees are employees of franchise brands. “Weil devoted an entire chapter to franchising and essentially demoted the franchise owner. Franchise owners pour their life savings into their businesses. They are not employees,” he says. “Weil wanted to benefit labor unions at the expense of small business owners. There wasn’t much suspense about how things would have turned out if Weil’s nomination passed through the Senate.”

The Value of Franchising

In preparation for the fight against Weil, Layman and his team did their due diligence. The IFA worked with Oxford Economics to implement a research study to illustrate the benefits of franchising for small business owners. The study, appropriately named The Value of Franchising, was used to educate the media, senators and other stakeholders about the benefits of the industry.

By interviewing more than 3,500 franchise owners, the study uncovered the significant impact that franchising has on communities and the opportunity it offers aspiring business owners. “All of the findings were more positive and better than we ever expected,” says Layman. For example, 32% of all respondents reported they would never have become business owners without franchising. This proportion was even greater among both female owners and first-time franchise business owners (39%).

The study also illustrated how franchise owners are embedded in their local communities. It found that U.S.-based companies operating as franchises jointly donated $1.5 billion to charity in the year before the pandemic and raised over $900 million over the same period.

Armed with information to dispute Weil’s theories, the IFA rallied as many allies as they could to join the fight, including the Chamber of Commerce and the National Restaurant Association. “We built a grassroots army across the country,” Layman says.

Layman viewed the fight against Weil’s nomination as a winnable from day one. “We have so many ways to activate our friends in franchising. Through our efforts, we made it abundantly clear how much of a persona non grata Weil really is.”

Layman says the IFA gets its strength from having high-profile members. “We are only powerful because our members are incredible, successful people. They are VIPs where they live and work and have great stories to tell about success in franchising.”