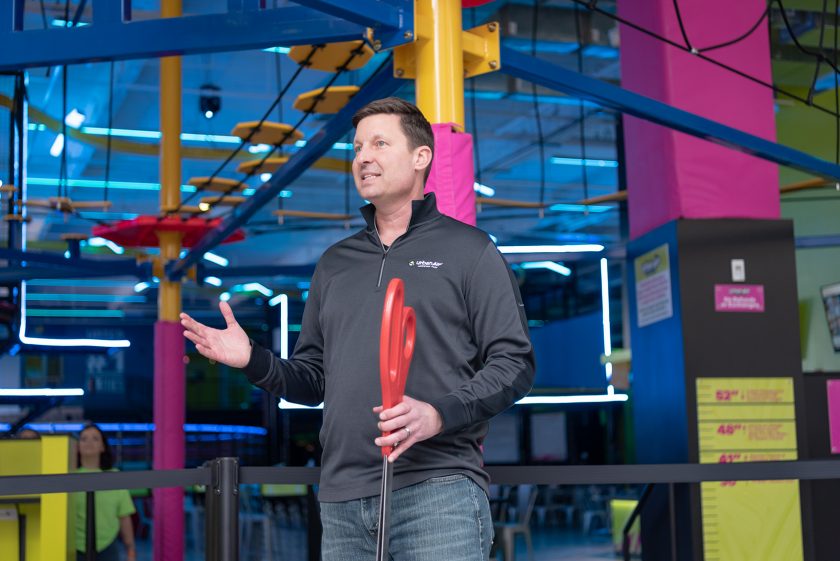 This Ohio Franchisee’s Indoor Adventure Park is a Soaring Success

Pursuing a career and lifestyle change, former banking executive Ted Grambo wanted to operate a business that was internet-proof. He debuted an Urban Air Adventure Park in Akron, Ohio, in November 2019, right before the Covid-19 pandemic hit and government regulations forced him to shut down.

Grambo had to close his business temporarily but reopened in June 2020. He was tremendously relieved when traffic steadily increased at his Urban Air Adventure Park, one of six franchises under the Unleashed Brands umbrella of children’s enrichment companies. (The others are The Little Gym, Premier Martial Arts, Snapology, Class 101, and XP League, which is organized esports that develop life skills.)

“I was pleasantly surprised at the demand coming back to the Akron park. It reaffirmed that this is an industry that kids need, will always be in high demand and can’t be replaced by technology. The Akron business was strong enough to give me confidence to expand,” Grambo says. “It helped that real estate opportunities were the best I’d ever seen, and demand is definitely up for the family entertainment business.” So in April of this year, Grambo – who had left banking after a 25-year career – opened his second Urban Air Adventure Park franchise in Westlake, Ohio.

“As an existing franchisee, I have seen firsthand how our parks have been a destination of choice for customers who are getting out again. Life is returning to normal. There is a lot of pent-up demand, and I expect it to grow as Covid numbers decline. I think the timing was right for expanding our reach.”

His second location in the Cleveland suburb of Westlake is unusual. “Typically, Urban Air has gone into empty retail spaces that were once big-box stores,” he says, “but the Westlake location is in a mixed-use community made up of high-end retail and residential. It’s a beautiful building and a beautiful community.”

By contrast, Grambo’s Akron franchise resides in a traditional Urban Air space, a former H.H. Gregg Inc. electronics store that didn’t survive. That building is located within the busy Crocker Park retail area that frequently hosts children’s events and summer markets. “Urban Air is a destination for families looking for entertainment, and our destination in Crocker Park provides a destination within a destination,” he says. “This area affords a robust and broad reach of customers.”

My roots started pulling me back toward entrepreneurship and owning something so that I could be more involved with my family and my community.

Those types of business considerations come naturally to Grambo, who was brought up in an entrepreneurial family. “My parents owned a couple of restaurants, and I grew up understanding entrepreneurism and being a business owner and all that goes with it. Based on how hard my dad worked, I went to college and decided that I didn’t want that. I got a job at a bank and rose to an executive-level position, most recently spending 10 years at PNC Bank.”

But career ambitions evolved for the 50-year-old father of two teenagers. “I got tired of the frequent travel and being away from my family so much. My roots started pulling me back toward entrepreneurship and owning something so that I could be more involved with my family and my community. And I wanted to stay away from something the internet can replace.” Grambo explains that technology not only has wiped out many businesses but it also takes away the human interactions that he enjoys.

Why Urban Air Appealed to Franchisee

“My wife is an educator and big on child development. I saw opportunity there and knew I wanted to do something in the youth market. I stopped in a few times at an Urban Air Adventure Park in Pennsylvania and liked what I saw.” After that, Grambo was sold on the idea. His next task was finding real estate that would work for a franchise physically and would also meet the demographic and location requirements vital to success.

He sees the strengths of Urban Air Adventure Park franchises as “having a unique set of attractions, challenges and experiences for kids. Things for kids who like to climb and jump, bumper cars, indoor go-karts. It’s the mix of attractions that are unlike anything other competitors have – families would have to two or three places to get all of the attractions, including our fast-casual café. The park’s amenities appeal to broad age ranges, and the branding is strong, with attractive colors lighting and music. I also get comments on how clean it is.”

Being part of an umbrella franchise poses an advantage, too, he says. “Unleashed Brands does open up additional opportunities to expand or leverage the other brands in the kids market – Premier Martial Arts, for instance. PMA just opened down the street from my Akron location. They have up a booth in my Urban Air franchise so they can create awareness and build a customer base. Kids can come to my business and play and have fun, and then take a Premier Martial Arts demo and test it and sign up for the classes. I felt like it would be a nice thing to do to help jump-start their business in Akron market.”

Grambo’s success is no fluke. Last year, 23 million guests visited an Urban Air Adventure Park. The Texas-based brand books 700 to 1,000 birthday parties systemwide every day. There are more than 200 locations open or under development across the United States.

Potential franchisees need minimum liquid capital of $750,000, and the minimum franchise fee is $100,000. Royalties are 7%. A franchisee will need deeper pockets to open an expanded-style Urban Air Adventure Park, which has a footprint of about 40,000 square feet. These cost about $2.5 million to open, with that amount covering the attractions, buildout, franchise fee, insurance, marketing, working capital and money for a down payment or lease.