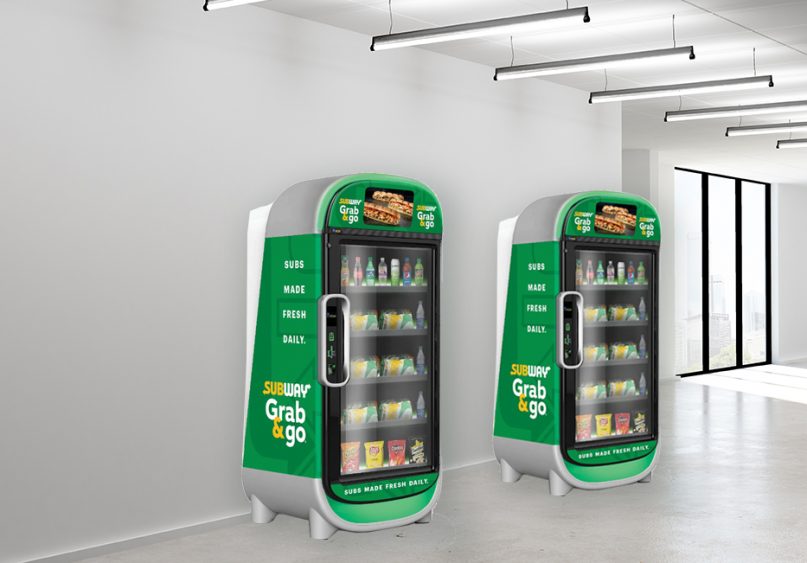 In an old-is-new-again tactic, Subway has taken an interesting turn on its path toward revitalizing: selling premade sandwiches in unattended Grab & Go artificial-intelligence refrigerators. The fridges are programmed to do “natural language processing” so that users can place an order with contactless purchasing, according to Subway.

The sandwich chain launched its first such fridge unit in September at the University of California San Diego, Subway said, with “extremely positive” reviews. A nearby franchise stocks the fridge daily, and a UV-C light sanitizer runs after every purchase.

(As an aside, the first automat restaurant opened in Berlin in 1895, Thoughtco.com says. Named Quisisana, it was established in several northern European cities when Joseph Horn and Frank Hardart licensed its technology and opened the first American automat in Philadelphia in 1902.)

But back to the present… Karla Martinez, who is Subway’s director of innovation for nontraditional development, said, ”consumers are drawn to sandwiches made fresh daily from a brand they know and love, versus competitor items that rely on a 14-day-plus shelf life.” A statement from Subway said the company plans to expand its Grab & Go smart-fridge concept to sites such as airports and hospitals as well as additional college campuses.

The smart fridges are a high-tech step up from its 2020 launch of sales in regular refrigerators at airports, casinos, gas stations and the like. Subway plans to continue growth of that program, too, the company said, and it’s already operating in 400 locations.

The Grab & Go fridges are one of many recent initiatives from Subway, which had fallen into decline during the past several years for various reasons. In mid-2021, it triggered a cascade of bad publicity after franchise agreement renewals imposed harsh terms on restaurant operators.  Lately, however, the fast-food restaurant chain has been polishing its brand and cuisine.

For instance, in addition to the Grab & Go program, Subway has taken the wraps off the most extensive menu overhaul during its 57-year history. To burnish its brand and make a publicity splash, Subway’s turnaround plan includes remodeled stores, new sandwiches and new soups. The revamped menu is designed to appeal to changing palate preferences as well as intentionally streamlining the offerings to expedite service and grow the number of orders placed digitally.

The changes appear to be helping: The company has reported that sales at stores open at least a year rose 8.4% in the third quarter, and for the previous 18 months, Subway reported “record-setting sales” for its approximately 20,700 U.S. sites, a number that has declined for five consecutive years. In late May, Subway had disclosed plans to alter its development approach in the United States, according to RestaurantBusinessOnline.com.  The most significant tactic will be to make multi-unit franchise ownership a priority. The attraction for these investors would be to purchase existing restaurant portfolios, with low startup costs sweetening the deals.