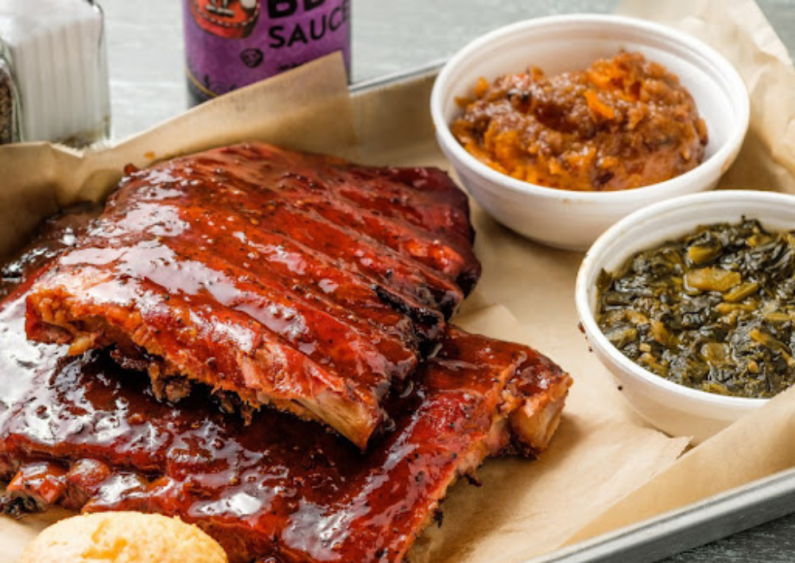 A Look at 10 of the Top BBQ Franchises

In the scorching summer heat, millions of Americans spice up their family gatherings and parties with seasoned, mouthwatering BBQ. Thanks to BBQ franchises, entrepreneurs can keep the party going all year long and cash in on America’s deeply-rooted love of BBQ. BBQ’s history in the U.S. can be traced back to the 19th century. According to Time, slow roasting meat was perfected in the 1800s in the southern part of the U.S. This has caused regional rivalries between the four states known for their unique BBQ style: North Carolina, Tennessee, Texas, and Missouri.

Like these states, BBQ franchises have to differentiate themselves from the competition to have an edge. For example, many BBQ franchises offer carryout, delivery, merchandise, and alcohol to increase profitability while cultivating a family-friendly atmosphere with fun music, animal mascots and kid’s menus. From burgers and hot dogs to ribs and steak, there is something for everyone at BBQ franchises. But is a BBQ business a good investment? The billion-dollar BBQ industry has led to the success of countless franchise business owners who value community and great customer service. Here are 10 of the top BBQ franchises to consider.

The VooDoo BBQ & Grill franchise is a New Orleans style BBQ brand that was founded on Mardi Gras day in 2002 on the city’s famous St. Charles Avenue. The BBQ franchise’s meats are dry rubbed with Cajun, Creole and Caribbean spices and are then slowly cooked with pecan and oak, which produces a smoke ring. VooDoo BBQ offers a unique menu to ensure it’s not just an ordinary restaurant. For example, VooDoo has daily specials, including red beans and rice with spicy Cajun sausage on Mondays and its signature Spicy Shrimp Po-Boy on Fridays. The Po-Boy is a traditional sandwich from Louisiana that is served with meat or fried seafood. In addition to having great food, VooDoo is known for an amazing culture that values giving back to the community. VooDoo has partnerships with charitable organizations that promote increased physical activity for children, including the Jimmy Graham Football Camp, the Reggie Bush Football Camp, the Chris Paul Basketball Camp, and the Ed Reed Golf Tournament. The BBQ brand also raises funds that assist single fathers through the Greer Foundation Annual VooDoo Masquerade Ball.

The Dickey’s Barbecue Pit franchise is one of the biggest names in the industry. Since its founding in 1941 by Travis Dickey, the BBQ franchise has expanded to more than 550 locations around the world. From the beginning, Dickey’s has been a family owned and operated business. Dickey’s turned into a family legacy when Roland and T.D. Dickey took over the business in 1967. Franchise owners enjoy several revenue streams with dine-in, catering, the Dickey’s mobile app, third-party delivery service partnerships, online ordering, merchandise and more. Dickey’s locations are relatively small and family-friendly at 1,500 sq. ft. In the spirit of Travis Dickey’s service in WWI, the brand offers a 25% discount off the initial franchise fee for veterans.

Crave Hot Dogs & BBQ was founded and began awarding franchise locations in 2018. The BBQ franchise has menus full of fan favorites, such as smoked brisket, pulled chicken, and pork. Crave also has specific menus for catering, breakfast, and its food trucks, which increases flexibility for franchise owners. Franchisees enjoy additional revenue streams with online ordering, catering, and more. While the BBQ franchise is known for its family-friendly environment, adults can’t get enough of Crave’s self-pour beer wall, ax throwing lanes, and fire pits. Veterans are incentivized to invest in Crave with $5,000 off the franchise fee, and the BBQ brand brings awareness to child trafficking with its own non-profit organization, Crave Saves.

Famous Dave’s was founded in 1994 on Round Lake in Hayward, Wisc., by Dave Anderson. Growing up, the Native American entrepreneur was at the bottom of his high school class, but he never gave up on his dream to open a successful BBQ restaurant. In addition to a culture that values families and customer service and strong brand recognition, franchise owners can choose from a QSR or full-service format. Additional revenue comes from an optional cloud kitchen, catering, and third-party delivery partnerships.

The Woody’s Bar-B-Q franchise was founded in 1980 by Woody Mills and Yolanda Mills-Mawman in Jacksonville, Fla. The first Woody’s franchise location was sold in 1989. Since then, the BBQ franchise has expanded to several locations through Florida and one in Pennsylvania. Woody’s has a menu full of appetizers, salads, gluten-free options, ribs, steak, and more. Woody’s catering and online ordering options add additional revenue streams. As a family-owned business, the BBQ franchise cultivates a family-friendly atmosphere. To keep children entertained at the restaurants, Woody’s offers activities where they can draw or put the pieces of a puzzle together. Kids will also like Woody’s characters: Percy the Pig, the franchise’s mascot, and his friends, Jack the Dog, Clover the Cow, and Daphne the Duck. Select locations also have Kids Eat Free Nights. The typical Woody’s location is 2500-3000 sq. ft. and can be free standing restaurants or operate in strip malls.

The Bar-B-Cutie SmokeHouse franchise is an iconic family-owned BBQ business that has served millions of customers in the U.S. south since 1950. From the first time Ronnie McFarland’s father, Eddie, ordered him his first BBQ sandwich, Ronnie was hooked. Over the years, Bar-B -Cutie has expanded to locations throughout Georgia, Tennessee, and Texas. Franchise owners enjoy multiple ways to generate revenue, including catering, dine-in, alcohol sales, merchandise, drive-thru and curbside pickup. Locations can be an end-cap in shopping or retail centers; a free standing location; or operate in a unique setting like an airport. The BBQ franchise also makes opening a location more convenient and affordable by allowing you to convert existing restaurants.

The Mighty Quinn’s Barbeque franchise is a growing fast casual brand that started out as a single restaurant in the East Village of Manhattan in 2012. Before awarding domestic franchise locations in 2018, Mighty Quinn’s already had five international franchised restaurants and nine company-owned restaurants located in New York and New Jersey. For customers with food allergies, the BBQ franchise has a list of allergen information so customers know what foods to avoid. Franchise owners benefit from multiple revenue streams: delivery, takeout, alcohol sales, dine-in, and catering. The ideal candidate wants to own multiple locations and is passionate about good hospitality and food. Mighty Quinn’s helps franchise partners set up a local supply network to source ingredients.

The first Bandana’s Bar-B-Q location opened in September 1996 in Arnold, Mo., to meet the demand for authentic southern BBQ. To keep true to its roots, the Bandana’s Bar-B-Q franchise only serves barbecued pork, beef, chicken, ribs and turkey; you won’t find hamburgers, fish sandwiches or pasta entrees on the menu. Bandana’s also has a special process to cook its meat. Before going to the smoker, its meats are hand rubbed and cooked for up to 14 hours. Bandana’s exclusive Dry Rub contains more than a dozen herbs and spices to create a signature taste. Bandana’s side dishes include potato salad, coleslaw, spicy Brunswick Stew, fried corn on the cob and grilled garlic bread. Franchise owners can add revenue through catering, gift cards, and selling the BBQ franchise’s merchandise and proprietary BBQ sauces and rubs. Bandana’s gives franchise owners and customers the opportunity to give back through its Dine To Donate fundraiser.

The Old Carolina Barbecue Company stays true to its Carolina roots by paying tribute to roadside shacks. The BBQ franchise’s meats are cooked for 14 hours to get the authentic Carolina taste. The first Old Carolina Barbecue Company restaurant was opened in 2006 in Massillon, Ohio. The BBQ concept was established by the Ichor Restaurant Group in 2003. Another brand with the Ichor Restaurant Group is Smoke the Burger Joint. Old Carolina has expanded to several locations throughout Ohio and Pennsylvania. Franchise owners benefit from additional streams of revenue through catering, online orders, and dine-in. The typical Old Carolina location is between 2800 – 3400 sq. ft.

The Moe’s Original BBQ franchise was founded by Ben Gilbert, Mike Fernandez, and Jeff Kennedy, three friends who met at the University of Alabama in Tuscaloosa and bonded over their love of southern BBQ, football, and whiskey. In addition to serving great southern BBQ and Alabama white barbecue sauce, franchise owners can also sell coozies, hats, hoodies, t-shirts, ski buffs, and more. Moe’s has expanded beyond its original Alabama location to Louisiana, Florida, Virginia, Tennessee, North Carolina, Mississippi, as well as up north to Maine.