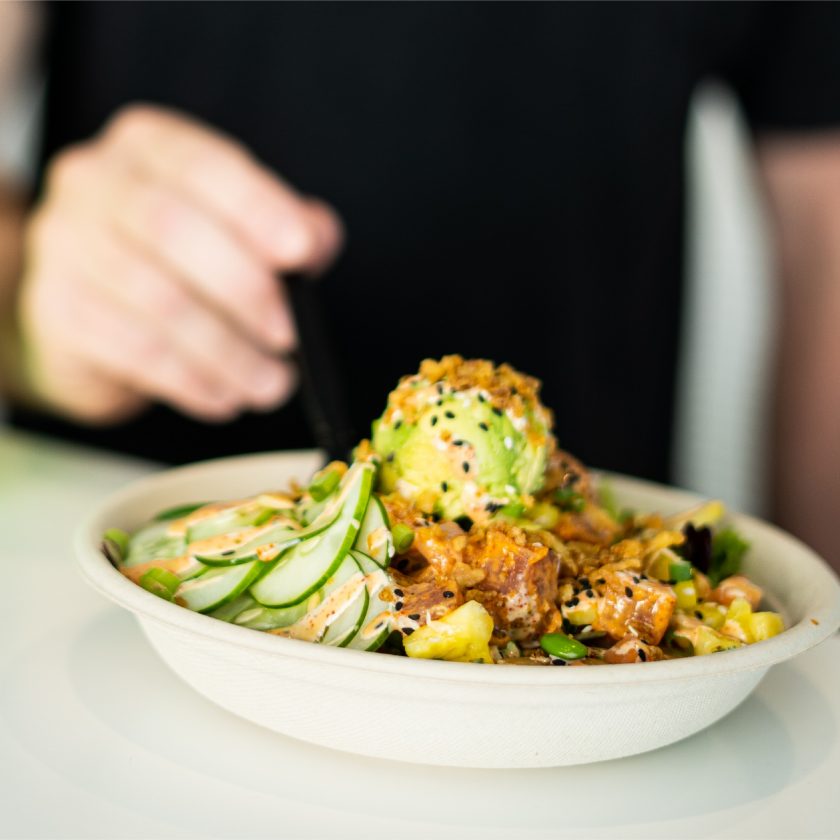 Forget Burgers and Pizza. Poke May Be the Next Big Thing in Food Franchising.

Mainland U.S. franchisors are hopping on the poke bandwagon. Hawaii’s beloved dish featuring diced raw fish dressed with soy sauce, sesame oil, seaweed and onions has quickly become a popular fast-food item in the contiguous United States. High in omega-3 fatty acids and vitamin A, poke is sought-after for its health benefits and adored for its fun make-your-own bowl concept.

In fact, healthy food, in general, is becoming more of a staple in food franchising. Other health-conscious fast-casual concepts, like juice franchises, have also been on the rise. Like juice bars, poke franchises are simpler and less expensive to open than traditional fast-casual restaurants because they don’t require sizable build-out spaces or as much equipment in the kitchen.

Island Fin Poké (top photo) was established in 2016 with a mission to serve the Hawaiian delicacy in a casual surf-shack-themed environment. Customers can enjoy a menu full of poke that can be enhanced with the brand’s 25 toppings and homemade sauces. The fish is sustainably sourced, so the customers and franchise owners can feel good about what’s being served. The company says that its small locations (from 900 to 1500 square feet) are capable of exceptional revenue. The franchisor estimates a total investment of $194,950 – $355,600.

Aloha Poké Co. started in a tiny food stall in a busy Chicago train station. The company says that its ahi tuna are long-line caught in the Pacific Ocean using sustainable practices and its Atlantic Salmon are farm-raised in one of the most optimal and sustainable ecosystems. With an all-in cost ranging from $140,900 – $363,800, the franchisor says their brand is expanding quickly because of its quality food, healthy margins and feel-good opportunity. Franchise owners take advantage of a distribution system with focused product purchasing and less wasted inventory. The brand seeks experienced multi-unit operators.

Pokēworks is a healthy Hawaiian-inspired fast-casual restaurant established in December 2015 in a tiny Midtown Manhattan grab-n-go and delivery location. From ahi tuna to organic tofu, the brand’s menu offers customers sustainable, seasonal, and natural ingredients. Additionally, Pokēworks understands the power of social media and reaches out to its target audience of millennials and Gen Zers. The company produced a viral video that has over 52 million views. In 2018, Pokēworks entered a partnership with Toridoll Holdings Corporation and has expanded throughout the country.

Former Major League pitcher Todd Stottlemyre (above) is the co-founder of Arizona-based KOIBITO POKĒ. Koibito, which is Japanese for “love,” is the inspiration behind the brand’s goal to make sure that customers show their bodies some love with the fresh ingredients in the brand’s four signature bowls along with its build-your-own poke, chicken, tofu, and veggie bowls. KOIBITO POKĒ offers its franchise owners a business model that is designed to maximize space and efficiency and achieve a low-cost labor model. The franchise also has a non-profit organization called KOIBITO Cares with a mission to help those in need and to show appreciation to those serving in the community.

The Poké Company is a contemporary fast-casual poke concept that offers customers bowls and poke burritos. The company is looking for single-unit franchise operators who will be given an exclusive territory, as well as candidates who seek area development agreements. In addition to providing customers with healthy food options, the company gives back to the community by working with ocean conservatories to help clean up oceans and end unsustainable fishing practices.

The Poki Bowl franchise was founded in 2015 in Northern California. The brand focuses on bringing classic Hawaiian with an Asian twist to the public. Its menu offers customers a simple yet delicious variety of options to build their own bowls. The brand offers single-unit, multi-unit, and master franchise agreements and claims the fastest return on investment within the poke industry. Site locations range from 1,000 to 2000 sq. ft. with an average location size of 1,250 sq. ft.

Poké Bar has its roots in the sushi business since 1989 and has expanded to poke. The company promises fresh poke without sacrificing taste, health, and quality in a fast-casual restaurant environment. The brand has grown to 69 franchise units in the U.S., Canada, Australia, and New Zealand and offers catering options for additional revenue streams.

The Atlantic Poké franchise is expanding on traditional poke items, like raw ahi tuna, soy sauce, rice, sesame oil, and chili pepper, by adding flavors that are associated with Asian and sushi restaurants. The brand’s menu offers many gluten-free options. Additionally, Atlantic Poké takes food handling and allergy awareness seriously, with food free from dairy, tree nuts and peanuts. The company was established in 2018 in Shrewsbury, Massachusetts, and began franchising in 2021.

Just Poké was founded in 2016 by childhood friends Danny Brawer and Norman Wu after they discovered poke on a trip to Maui. The brand’s menu offers a variety of signature bowls, torched bowls, or build-your-own-bowl options. Just Poké offers a simple business model with small kitchens that lower the franchise owner’s overhead. The brand has many feel-good qualities including sustainable practices and its “Give More” initiative which improves local communities by partnering with local vendors and supporting other local small businesses. The franchise is continuing to expand with brick-and-mortar locations and food trucks.