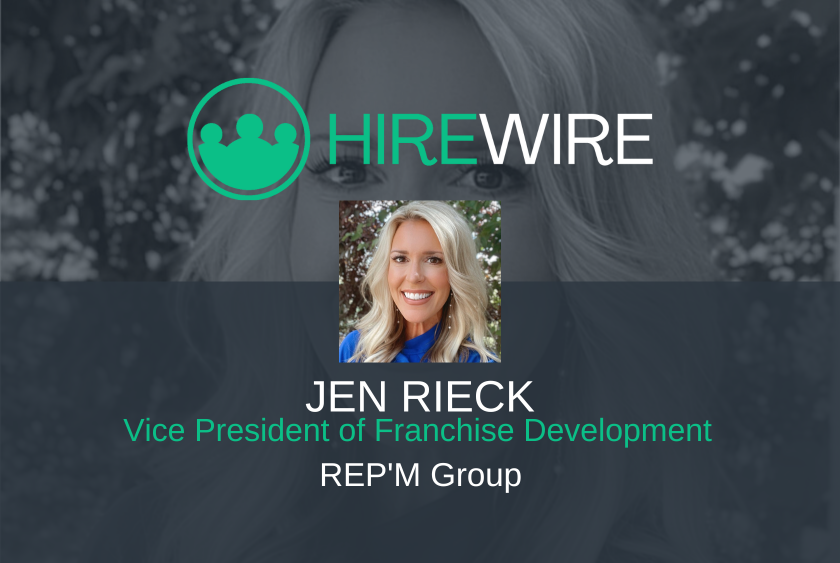 “I’m excited to be moving back into a vice president of development role in which I can lead an amazing team – I really enjoy mentoring,” Rieck says. “I’m also extremely data-driven, so helping set KPIs (key performance indicators) and analyzing metrics to drive and achieve sales goals is something I’m looking forward to.”

She believes that REP’M Group’s “leadership team and my co-workers are the best in the business. It’s a work-hard, play-hard culture, and we all have a blast doing what we do! Working at REP’M doesn’t feel like being at work. It feels like spending time with family. I am truly blessed to be a part of this team.”

REP’M Group’s leadership team is also excited to have Rieck on board. Nick Sheehan, REP’M co-founder and managing partner, praises Rieck as “a natural in working with franchise candidates throughout the sales process. She is an excellent communicator and enabler, and it shows in everything she does. In a very short period of time, she has demonstrated leadership skills that only the elite in franchise development have.”

Sheehan also points out that in the eight months since Ellie Mental Health launched, Rieck awarded over 150 licenses. “REP’M could not be more supportive and proud of Jen as she accepts this new role. We are very excited to see what she accomplishes,” Sheehan says.

Rieck sees REP’M Group as positively impacting the future of franchising by properly structuring franchise systems. “At the company’s core, REP’M Group is focused on helping brands and franchisee’s grow confidently. This means offering a full-service approach from start to finish and eliminating common gaps in support that we typically see happening in the franchise industry.”

From Veteran to Multi-Unit Franchisee

Before getting into franchising, the Colorado native was an eight-year veteran with the U.S. Navy as a logistics specialist. Her military service prepared her for business ownership. “The military instills teamwork and process leadership – both are traits that have prepared me for owning franchise businesses with my husband. Working full-time and owning our own franchises can be a lot of work at times. But we divide, conquer and work together to build for the future and for our children. It’s extremely fulfilling,” Rieck says.

She is a big proponent of veterans looking at franchising as they transition out of the military. “I have assisted many veterans in becoming franchise owners. As I have watched their journeys over the years, I have witnessed that it’s natural for them to follow a proven business model. The military is task-oriented and success is mission-critical, so veterans know how to dig in and have the grit needed to be an entrepreneur,” Rieck says.

Rieck was initially recruited into the franchise industry five years ago by a friend who was vice president of operations for a salon suite concept. “I was working as a recruiter, and she felt that recruitment and franchise development had a lot of similarities. I attended a Discovery Day event with her and thought it was so fun. I was instantly hooked,” Rieck says.

In her recruiting career, Rieck loved helping candidates find their dream jobs. Now she gets to help people fulfill their dreams of business ownership, which she finds highly rewarding. Rieck’s favorite aspect of the franchise industry are the people. “It feels very much like a family, and seeing colleagues and consultants at franchise conferences throughout the year is always like a big family reunion. It’s energizing.”

Her other franchising experience includes being a multi-unit franchisee with Ellie Mental Health and the director of franchise development for Self Esteem Brands, an umbrella franchisor of fitness brands including Anytime Fitness, The Bar Method, Waxing the City and Basecamp Fitness.