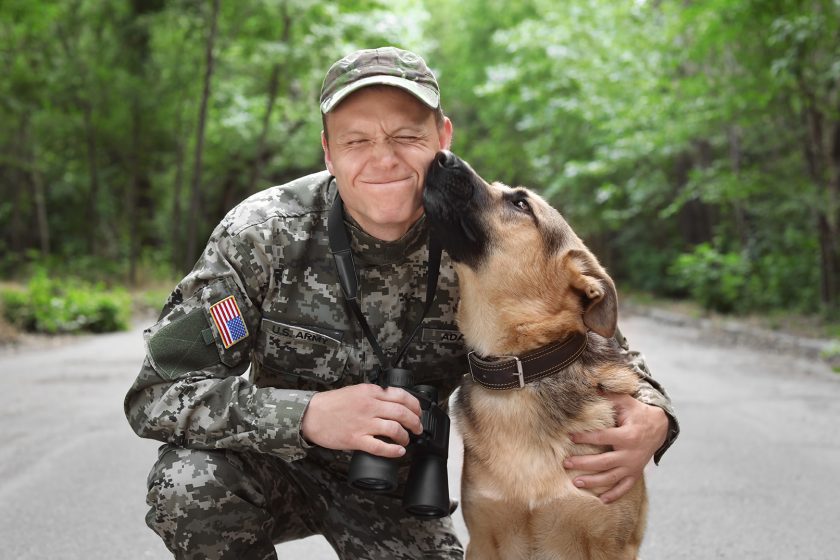 Research at Purdue University’s College of Veterinary Medicine affirms the benefits of service dogs for military veterans with post-traumatic stress disorder (PTSD) and helps identify which dog-human interactions will work out best. The findings will help maximize the mental health and quality of life benefits provided by these service dogs. Dr. Maggie O’Haire, associate professor of Human-Animal Interaction at the veterinary college, led the three-year study supported by K9s For Warriors and the Dogtopia Foundation.

The research, which began in 2017 and ended in 2020, involved 82 veterans with PTSD and 82 service dogs from K9s For Warriors. O’Haire’s team video-recorded behavior tests with the dogs, questioned veterans about their mental health, and used smartphone technology to measure daily emotions and time spent with service dogs.

Benefits of Service Dog Therapy for Veterans with PTSD

Major findings from the study include:

“The ultimate goal of our research is to amplify the voices of veterans and their families through science,” said O’Haire, who has studied service dogs and veterans for seven years. “We are providing quantifiable data that shows how service dogs can improve symptoms and quality of life for certain veterans with PTSD.”

“We’ve seen firsthand the benefits of service dogs for veterans with PTSD and are proud to support Dr. O’Haire’s groundbreaking research,” said Liz Meyers, executive director of the Dogtopia Foundation, the charitable arm of the dog daycare franchise Dogtopia. “We remain committed to raising funds to train service dogs for veterans with PTSD and increasing awareness of the need through the efforts of our franchisees who are incredibly dedicated to this worthy cause.”

In partnership with nearly 200 Dogtopia franchisees, the foundation has raised money to help sponsor 187 service dogs since the 501(c)3 nonprofit organization’s founding in 2017. More than 60 of those dogs were sponsored in partnership with K9s For Warriors during the past year.

Founded in 2002, Dogtopia focuses on wellness, quality of care, safety and transparency. The franchise offers technology that allows pet parents to check up on their dogs via webcams.

The Dogtopia Foundation funds programs focused on service dogs for veterans, youth literacy programs and employment initiatives for adults with autism. The foundation’s aim is to identify needs, fill gaps and integrate knowledge for improvement in the areas of focus.