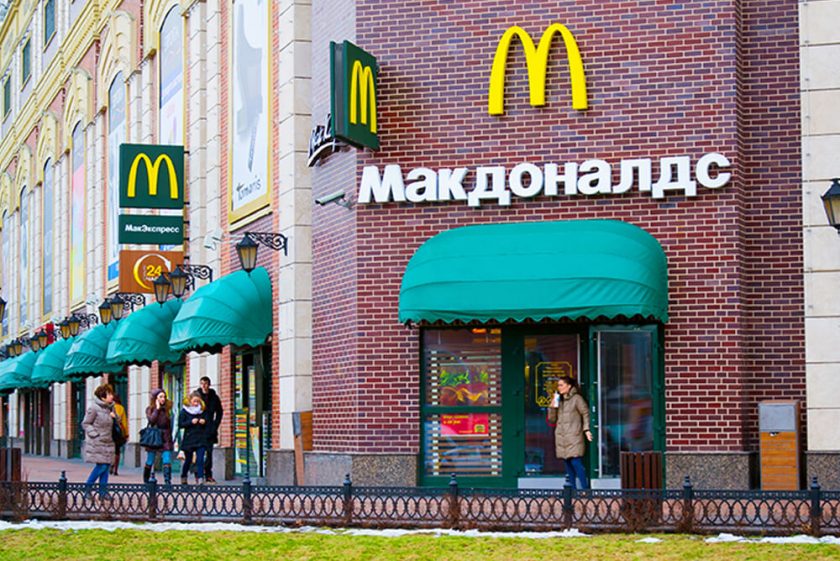 McDonald’s Corp. is saying do svidaniya to Russia. Because of the invasion of Ukraine, the fast-food giant is exiting Russia and selling its restaurants there. Eighty-four percent of McDonald’s 847 restaurants in Russia are corporate-owned; the remainder belongs to franchisees.

Russia invaded Ukraine in late February, prompting many Western governments to impose various economic sanctions on Russia. Those sanctions, in addition to disrupting business as usual in Russia, have made it hard for foreign-owned companies to operate there.

On March 8, McDonald’s announced it would suspend operations at all locations but keep paying all its employees. The decision to vacate the country will directly affect those 62,000 employees plus hundreds of suppliers and distributors. While pursuing a sale of its holdings, McDonald’s stated that it plans to pay employees.

Pressure After Invasion in Ukraine

As the fighting in Ukraine has continued, Western companies have found themselves in the middle of a political and ideological tug-of-war. Ukraine has pressed them to sever Russian ties completely, and Moscow has threatened to nationalize their holdings in Russia.

McDonald’s departure is particularly noteworthy because of its long history of operating there. McDonald’s was one of the first Western entities to do business in Russia once communism fell by the wayside. When the first Big Mac and fries were served at McDonald’s in Moscow in 1990, more than 30,000 customers queued up on opening day to sample the iconic American menu, according to an NPR report.

In explaining the reasons behind its decision to leave, McDonald’s stated that continuing to operate in Russia was no longer practical and clashed with the company’s values. “We have a long history of establishing deep, local roots wherever the arches shine,” CEO Chris Kempczinski said in a news release. “We have a commitment to our global community and must remain steadfast in our values. And our commitment to our values means that we can no longer keep the arches shining there.”

Kempczinski said McDonald’s leadership also considered several additional factors, including whether the company could legally operate in Russia, adequately take care of its customers and employees, and avoid damage to its reputation if it stayed. “The humanitarian crisis caused by the war in Ukraine, and the precipitating unpredictable operating environment, have led McDonald’s to conclude that continued ownership of the business in Russia is no longer tenable,” the company stated.

McDonald’s disclosed that the pullout would cause an accounting charge of $1.2 billion to $1.4 billion, the Journal reported. Together, McDonald’s restaurants in Russia and Ukraine – the besieged nation has about 100 company-owned restaurants, all of which are currently closed – generated roughly 9% of the company’s total revenue in 2021. That revenue represented less than 3% of its operating income, the company has stated.