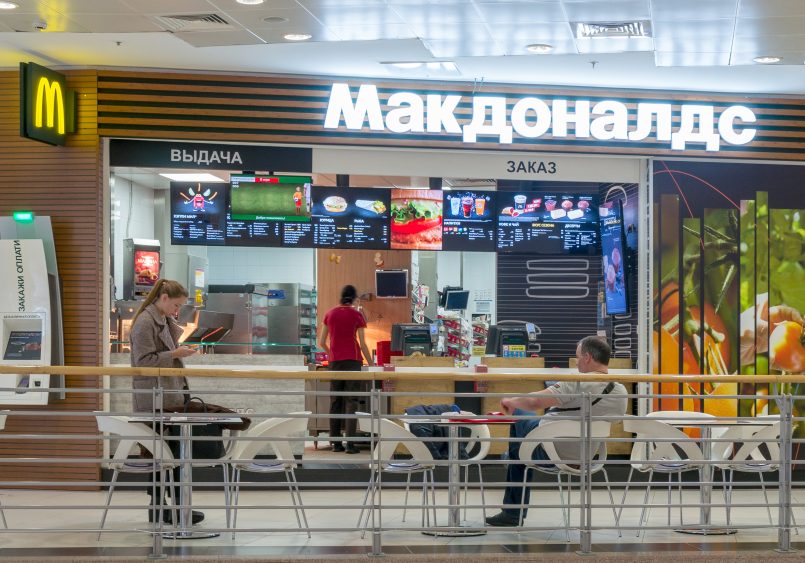 McDonald’s is paying a hefty tab for restaurant shutdowns related to Russia’s invasion of Ukraine. In March the fast-food giant halted store operations in Russia; it also shuttered its restaurants in Ukraine. The closures led to a 28% decline in the corporation’s net income for the first quarter of 2022, with red ink of $127 million directly attributable to the company’s actions in Ukraine and Russia, according to CNN Business.

In a call with analysts on Thursday, McDonald’s CEO Chris Kempczinski confirmed that the company has kept Russian and Ukrainian employees on the payroll. Employee wages, plus payments for leases and supplies, amount to $27 million of that total.

But the much greater remainder of the total is being incurred because the corporation will simply be forced to jettison food and other items, CNN Business reported. “Results included … $100 million of costs for inventory in the company‘s supply chain that likely will be disposed of due to restaurants being temporarily closed,” a McDonald’s statement said. Kempczinski said McDonald’s will disclose its further plans in Ukraine and Russia by June 30.

An investor document cited by CNN Business revealed that McDonald’s had 847 restaurants in Russia and 108 in Ukraine as 2021 ended. Their combined incomes comprised 9% of McDonald’s revenue last year.

McDonald‘s sales grew elsewhere during the first quarter of this year, CNN Business reported in its article. Among restaurants that had been open at least 13 months, sales rose 11.8% for the period, with the majority of that increase coming from McDonald’s sites outside the U.S. Domestically, sales revenue increased 3.5%, partly because of roughly 8% in price increases to customers. Last year, McDonald’s raised prices by about 6%, the article stated.

Chief Financial Officer Kevin Ozan, who also spoke during Thursday’s call to analysts, said, “Consumers are definitely worried about inflation. They‘re concerned about energy and gas prices.” Ozan said his company is keeping “a close watch on lower-end consumers just to make sure that we’re still providing the right value.”

In the face of challenges caused by the ongoing war and Covid-19 pandemic, McDonald’s has maintained a strong advertising presence for its mainstay menu offerings. It also has performed solidly in the digital arena, particularly via its enhanced loyalty program, to maintain strong sales within the United States, according to CNN Business.