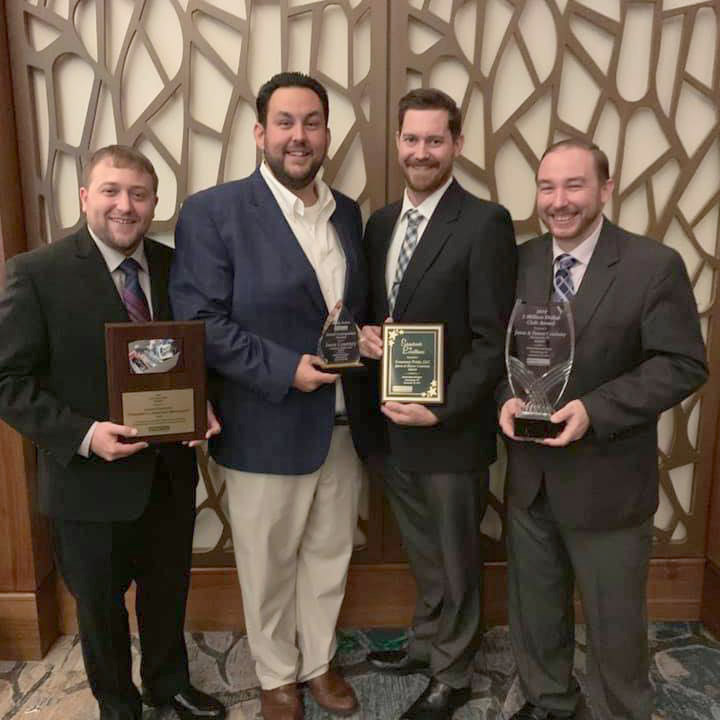 Courtney Has Found Meaning as an Office Pride Franchise Owner

Jason Courtney’s (above, second from left) journey into franchise ownership started as a part-time job with the Pensacola, FL Office Pride team back in 2011. At the time, he was enrolled in law enforcement school and never planned on owning a commercial cleaning franchise. “The job just fell on my lap,” Jason explains. He knew the local Office Pride owner from church and was offered the position.

As it turns out, Jason was a natural at running a business and received multiple promotions in supervisory roles until he became Director of Operations for the franchise owner’s two locations. In his time as an Office Pride employee, Jason fell in love with the brand because of its faith-based culture and values. “The company’s values and mission aligned with mine,” he says. During his employment, Jason accompanied his boss to the Office Pride Annual Retreat and was taken by the culture. “This is a family like no other. Everyone is so approachable and supportive,” he says.

Jason also learned the ins and outs of running the business, so when his boss decided to sell one of his two locations, Courtney jumped at the investment opportunity. “I always had an entrepreneurial mindset,” says Courtney. “I knew this was perfect for me.”

So in 2015, Jason and his brother Simon (above, far right) became co-owners of Office Pride’s Pensacola, FL location. Since then, they added on a second location in Tampa and brought in two more partners. Between the two locations, the four partners run a six-million dollar operation with 175 employees, 12 of whom are salaried managers.

Jason is an incredibly active franchisee and even had the honor of helping the corporate team rework the company’s mission statement: “Honor God by positively impacting people and workplaces.”

Courtney takes the mission statement seriously and uses it as a guide for running his business.  “Whenever I am faced with a difficult management decision, I use the mission statement as a guide.” For example, one of Jason’s employees lost her sister and needed time off, but she had already used up all of her paid time off. “Instead of letting her go, we gave her a paid leave of absence.” He uses the company’s mission similarly when dealing with clients. “Running a mission-driven business builds strong relationships with clients and employees,” he says.

Part of Jason’s role as an Office Pride owner is setting the vision and driving down the culture throughout his business. By following Office Pride’s core beliefs and values, he and his team are incredibly active in their community and regularly participate in charitable events, including donating cleaning services and running food drives. “Many of our employees bring initiatives to our attention. It’s a great way for us to give back together,” he says.

Jason’s advice to anyone interested in Office Pride is to “be ready to work and follow the system.”

Jason says that during his first couple of years of ownership, he and his brother ran a bare-bones operation. “Office Pride has laid out a great system. You don’t have to reinvent the wheel, but you do need to put in the time to establish the business, and it’s well worth it,” he says. “I am in a great place. I could do this for the rest of my life.”

#commercialcleaning#officepride
Previous ArticleCan You Get Compensation if You Get Injured at Work as a Fly-In-Fly-Out Employee?Next ArticleHouse Democrats pass the PRO Act: What it means for franchises