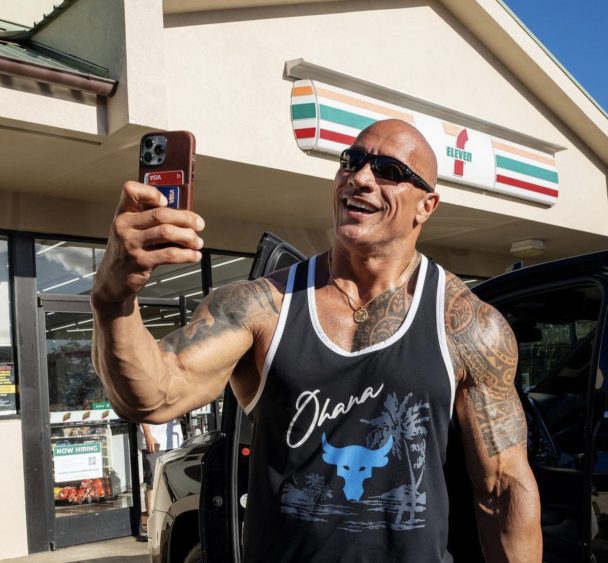 As a Teen, The Black Adam Star Regularly Stole Candy Bars from the Convenience Store Franchise

Dwayne “The Rock” Johnson recently – and creatively – made amends for stealing candy bars from a Hawaii 7-Eleven franchise store in his youth. Appearing on social media, the Black Adam actor, 50, revealed that during the time his family resided on the island, they were “broke as hell,” and at times, his hunger got the better of him.

“When I was 14 years old, every day I used to stop here at this 7-Eleven and steal a king-sized Snicker bar because I couldn’t afford to buy one” to eat as his pre-workout snack, he said in the social media post.  “I did that for almost a year every day.”

The Rock Rights his Wrong

Johnson said he could have easily been arrested for the shoplifting. “The same clerk was there every day and always just turned her head and never busted me,” a kindness that didn’t ease his guilt as the years passed.

In late November, Johnson seized his opportunity for redemption. “I finally exorcised this damn chocolate demon that’s been gnawing at me for decades,” the former wrestler stated in the caption for the Instagram post. “We were evicted from Hawaii in ’87, and after all these years — I finally got back home to right this wrong.”

Buying Every Snickers in the Store

Johnson said he asked the current cashier at that same Hawaii store to sell him every Snickers on the premises. Then he left the chocolate-nougat-caramel-peanut bars on the counter and instructed the clerk to give the Snickers to any customers who look as if they might be about to steal one.

But that’s not all. Johnson also gave the clerk a tip for his assistance and paid for customers’ purchases while he was in the 7-Eleven. His final tab came to $298.

In a follow-up Instagram post, Johnson shows the selfie he took outside the convenience store as well as when he was inside and the clerk was ringing up the candy bars.

The star – known for roles in The Mummy, Jumanji and the Fast & Furious movies as well as the current “Young Rock” autobiographical TV series on NBC – said he “always knew [he] needed to go in and clean out every Snickers bar they had – the right way.” He added that “as a bonus it was a lot of fun to take care of everybody who walked into 7-11 while I was there. Least I could do considering all the s___ I used to steal from here.”

The action was cathartic and rewarding, he said. “We can’t change the past and some of the dumb stuff we may have done, but every once in a while we can add a little redeeming grace note to that situation — and maybe put a big smile on some strangers’ faces.”

7-Eleven responded to The Rock’s post in high humor, posting this in the comments section: “Well, now that I know ur pre workout secret, I’m bout to be 💪😤.” (The convenience store chain, founded in 1927 in Dallas, franchises, licenses and operates around 78,000 stores globally.)

Johnson has long been candid about his family’s financial difficulties while he was growing up. NBC reported that in 2017, The Rock said others’ generosity helped his parents stretch their paychecks and keep food in the house. He said his mother had pointed out “there was a time back in ’87 when we couldn’t even afford Thanksgiving dinner and were praying someone would invite us over [to] their house to eat. We were in a tough spot back then, but we got [through] it.”