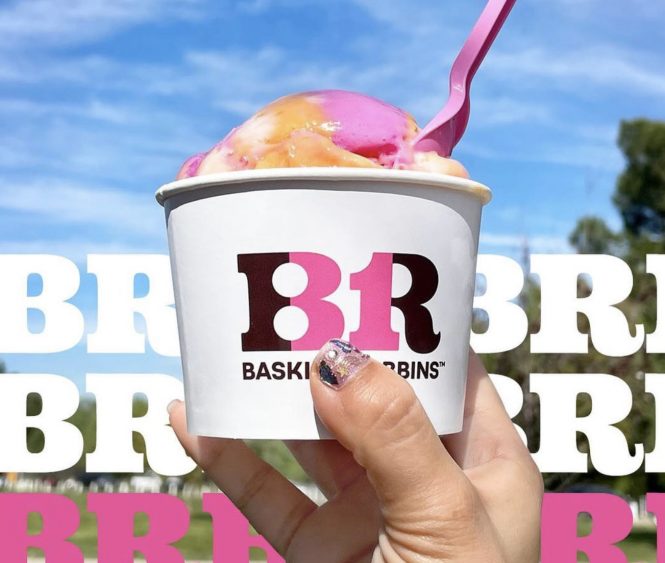 Here’s a major scoop for ice cream lovers: Baskin-Robbins is getting hipper. The international franchise has revised its logo, will sell branded merchandise online and will introduce new flavors. Baskin-Robbins also is altering its product packaging and employee uniforms, and it’s serving up a new tagline, “Seize the Yay,” along with its standard indulgences of ice cream cones, sundaes, cakes and shakes. Already visible online, the changes will roll out in shops over the next year and a half.

“When we really think about the journey … it started four years ago,” Jason Maceda, Baskin-Robbins president, told CNN.  That included “really listening” to customers, who said they loved the brand and felt nostalgia toward it because of trips to the shops with their parents and grandparents. But leaders at the Massachusetts-based company knew they wanted to attract new customers, too. So the changes aren’t revolutionary but they fall in line with the expectations of today’s consumers.

One notable innovation began in late 2018, when Baskin-Robbins introduced a revamped layout for some stores, CNN reported. These “Moments” stores – about 70 of them are operating now – have digital menu signs and more freezer cases displaying ice cream flavors. That’s just a sliver of the franchise’s 7,700 stores around the globe, but more are planned. The company has prospered despite the pandemic, Maceda said, telling CNN that sales increased by 3.5% in 2020 and 10.9% in 2021. Perhaps that’s a testimonial to ice cream being a great comfort food.

The new crisper, cleaner logo still shows the number 31, its iconic symbolism that customers can enjoy a different flavor every day of the month at Baskin-Robbins stores. The colors of bright pink and chocolate brown, along with circus imagery used in the brand refresh, hark back to the company’s initial 1953 advertising campaign. (For any readers who are charting a timeline and find that the numbers don’t add up: Brothers-in-law Irv Robbins and Burt Baskin had founded the company in 1945 as one standalone store in Glendale, Calif., but didn’t christen it as Baskin-Robbins until 1953. They also began franchising in the 1950s.)

The franchisor’s marketing campaign will introduce three flavors to the hundreds in the existing portfolio, starting with April’s flavor of the month: Totally Unwrapped, featuring peanut butter and chocolate ice creams, caramel, chocolaty pretzels, and peanuts. The additional newcomers, which will debut later this spring, are more revolutionary: Ube Coconut Swirl, a coconut ice cream and swirl of ube, a sweet purple yam; and Mint Chocochunk, a non-dairy coconut milk dessert with gooey chocolate.

Baskin-Robbins’ branded merchandise, with sales expected to start April 18, will include surprising items such as bicycles and skateboards. But there will also be tamer fare such as scrunchies, sweatshirts and bucket hats. The bikes fit the Seize the Yay tagline, said Jerid Grandinetti, Baskin-Robbins’ vice president of marketing and culinary. “Small moments that spark joy often get taken for granted. We’re encouraging people to pause and celebrate any moment that brings happiness with Baskin-Robbins,” Grandinetti said in a news release. Consumer-focused businesses often reset their brands to keep pace with today’s internet-driven world that every day delivers shiny new objects to make a grab for. For instance, Subway launched a refresh about 10 months ago,  with major menu changes and a celebrity-athlete-driven advertising campaign.