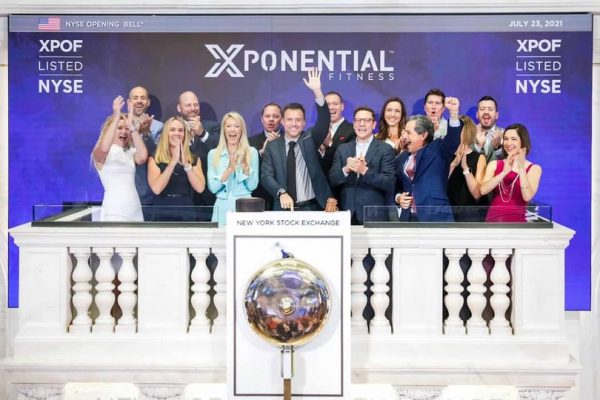 Xponential Fitness, which operates nine franchised boutique fitness brands, had its debut on the New York Stock Exchange this past Friday, July 23 under the symbol “XPOF.”

Founded by Anthony Geisler in 2017, Xponential Fitness has been the umbrella franchisor for Club Pilates as well as a number of other boutique fitness brands, including Row House, StretchLab, and CycleBar. The company recently added Rumble, a boxing concept, to its mix of niche fitness brands.

Xponential is the largest boutique fitness franchisor in the U.S. with more than 1,750 studios. The California-based company calls itself a curator of leading boutique fitness brands with a mission to make boutique fitness accessible to everyone. Its diversified portfolio includes several verticals including Pilates, indoor cycling, barre, stretching, rowing, dancing, boxing, running and yoga.

The stock opened at $11.20 a share, which was less than Xponential’s $12 IPO price. Even that price reflects a cut from the corporation’s estimated range of $14 to $16 a share, according to MarketWatch. The price did later rise to $11.89. Xponential Fitness put 10 million shares on the block, after originally planning to sell 13.3 million, the report said.

John Meloun, chief financial officer for Xponential Fitness Inc., told MarketWatch that the company’s franchisees are “already operating above pre-Covid levels. Boutique fitness is unique and meant for a communal environment. People who do it fall in love with it.”

Investors may be concerned, however, that people have come to prefer to exercise at home, sometimes taking online classes, rather than returning to commercial gyms. But Meloun downplayed that idea, saying that “exercising outside the home is here to stay and something that will continue to grow.”

Xponential had offered a digital platform even before the pandemic and saw fitness customers pivot strongly to that option when Covid-19 was at its peak. Meloun sees those at-home workouts as a supplement to his company’s on-premises offerings and not a replacement for them.

Other takeaways from the MarketWatch article:

In its prospectus, Xponential explains that it derives substantial revenue from royalties and other fees and commissions from its franchisees. “These revenue streams were affected by the decline in system-wide sales as almost all studios were temporarily closed intermittently beginning in mid-March and throughout 2020 and early 2021, and new studio openings were delayed,” according to the prospectus.

Meloun said the IPO was an opportunity for Xponential to raise capital after increasing its debt to buy brands. Outside the United States, in countries such as Japan and Australia, Xponential operates a master-franchise model.

What Food Franchises Does Shaquille O’Neal Own? 40599

Why is Chick-fil-A Better Than McDonald’s? 6605