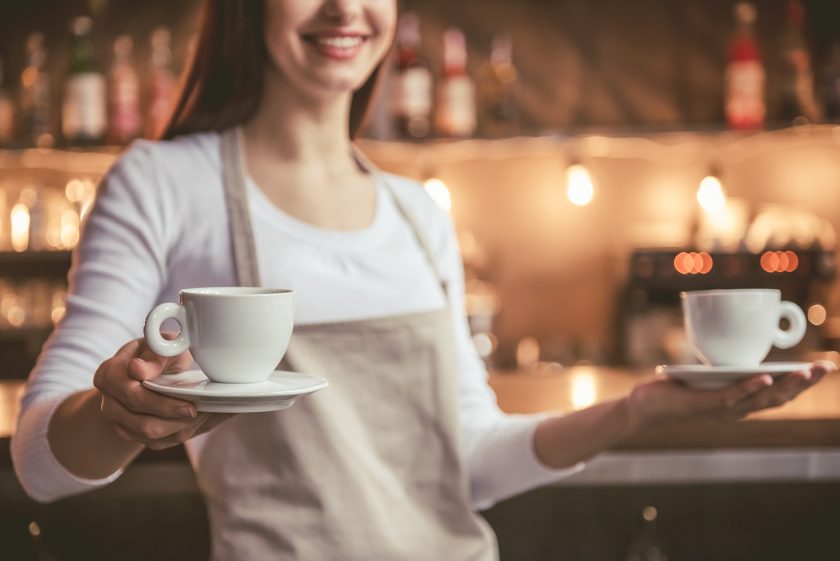 There is nothing quite like starting the day with a cup of coffee. With an intoxicating smell, coffee is the go-to staple many of us count on to make it through the day. While nobody knows exactly where or when coffee was discovered, there are legends about its origin.

Coffee grown worldwide can trace its roots back centuries ago to the ancient coffee forest on the Ethiopian plateau. Legend has it that coffee beans were discovered by a goat herder named Kaldi, who reported his findings to a local monastery that then made drinks using the berries that made Kaldi’s sheeps restless. After the Abbot noticed his own boost in energy after drinking it, he told the other monks of the monastery and its popularity grew from there.

Fast forward to today, and coffee is a billion-dollar industry globally with beloved brands that offer franchising opportunities. While not a franchise, Starbucks opens about two stores daily. A global favorite and leader in franchising, Dunkin’ sells some two billion cups annually. If you love coffee like a lot of the world, you may have romantic images of owning a coffee shop. But are coffee franchises a good investment? Here’s a look at the top coffee franchises and what they have to offer.

Benefits of Owning a Coffee Franchise

There are many reasons to consider getting your piece of the booming coffee industry. Pros to owning a coffee franchise include:

Challenges of Owning a Coffee Franchise

Founded in 1950, Dunkin’ changed its name from Dunkin Donuts in 2018 as part of its rebranding effort to cater to more high-end beverage drinkers. On top of their original hot coffee, they offer a wide array of espresso drinks from lattes, cappuccinos, and macchiatos, as well as their signature coolattas and donuts. Dunkin’ ranks high among fast-food franchises for veterans, who receive 20% off the initial franchise fee for up to five locations.

Founded in 1998 in Oregon, The Human Bean is a very popular espresso drive-thru stand that has numerous locations around the country. In addition to offering customers a quality product, the company has done good deeds around the world. For example, the company provided school supplies for an orphanage in Sumatra, planted shade trees in El Salvador, and placed water wells in East Africa.

Founded in 1995, BIGGBY COFFEE is a popular coffee shop franchise that specializes in a wide variety of drinks, including hot, frozen, and iced lattes. It was recently named one of America’s favorite coffee brands by Newsweek magazine. The company supports its franchise partners with three-week training. According to the brand’s manifesto, the company would like to have customers feel like they’re going to a friend’s house when they go into its shops.

Founded in 1979, Gloria Jean’s Coffees has more than 800 locations globally and has expanded to 50 locations in the U.S. Fans of Gloria Jean’s Coffees can get a coffee subscription on their website. To invest, a franchisee needs to start with $173,150 to $473,000. In order to maintain the consistency of its coffee, the company sources its own beans, produces its own roasts and designs its own blends.

Founded in Nebraska, Scooter’s Coffee says it roasts from the top 10% of specialty coffee beans in the world. Since its founding in 1998, the business has expanded to 200 locations in 14 states and plans on continuing its expansion. No business leadership experience is required, as they’ll train you at their headquarters in Omaha. Its signature drink is called the Caramelicious, and the company got its name from the idea of getting customers to “scoot in and scoot out” of the location quickly.

Founded in 2014 by former Green Beret Evan Hafer, the premium coffee company is known for its support of veterans. It’s based in Salt Lake City and has over 1,700 shops across the country. The company is looking for franchisees with at least two years of restaurant experience and a passion for the brand.

The Coffee Bean and Tea Leaf

Founded in 1963, the Coffee Bean and Tea Leaf is one of the oldest and largest coffee and tea brands in the U.S. They boast that their coffee master, Jay Isais, selects the top 1% of Arabica beans from the world’s best-growing regions. The company focuses on multi-unit franchise models rather than single-unit franchising. But, single-unit franchising is possible for non-traditional locations such as casinos, hotels, and airports.

Founded in 1978 by coffee pioneer Phyllis Jordan, PJ’s Coffee of New Orleans is known for its harvesting, roasting, and crafting of its gourmet drinks using only the top 1% of Arabica beans. It is also known for its good service to the community and Veterans, who receive 20% off the initial franchise fee. With roots in New Orleans, the company strives to stay true to the character of the city with great hospitality to customers and a quality product.

Founded in 1987, Dunn Brothers Coffee is known for its small batches of coffee roasted every day in-store. None of the beans and grinds they use in the store are ever more than five days old. The company partners with World Coffee Research (WRC) and Alight to support the growth, protection, and enhancement of supplies for the families who produce quality coffee worldwide.

Founded in 1976, the Coffee Beanery says it came into existence before Americans knew the term “specialty coffee.” They are known for their family business approach and exceptional coffee. A promising franchisee has to invest $338,500-$501,500. The company also has a program that allows customers to sell its coffee for fundraising projects and allows them to keep 40% of the profits.

Coffee franchises can be a good investment for the right person. There is a strong demand, it’s a fun business to own and offers scalability. But before jumping into any franchise investment, it is important to seek the professional advice of a franchise consultant, who can help you determine if franchising is right for you.