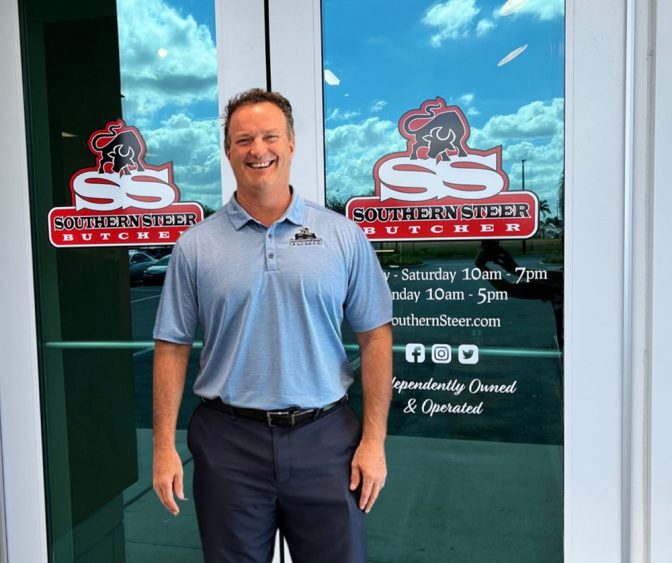 Once upon a time, the local butcher shop was the cornerstone of every neighborhood. As big-box stores and mega-supermarkets came on the scene, those local gems disappeared and so did the charm and personalized service they delivered … until now. Thanks to entrepreneur Greg Snyder (above), the local butcher has made a comeback with Southern Steer Butcher, a full-service market that appeals to foodies who crave high-quality meats, convenience and service. The customer-centric butcher shop franchise offers a unique opportunity for entrepreneurs who love food and people.

An avid griller and food enthusiast, Snyder had a vision for a community-centric shop where people could get premium meats along with side dishes, spices and marinades. Most importantly, he wanted to create a shop with a neighborhood feel that offered personalized service and advice on how to expertly prepare meats.

Coming into our shops elicits emotions of community and home.

Snyder set out to make Southern Steer Butcher a regular part of his customers’ lives and dinner tables. “Southern Steer is more than a store. It’s an experience with hand-to-hand service. Coming into our shops elicits emotions of community and home.”

Snyder launched the first Southern Steer Butcher location in Clearwater, Fla., in 2013. Before leaving his corporate job to launch the business, he worked in food franchising for years, including a 20-year stint at Bloomin’ Brands. He admits that he was nervous about taking a chance on this new idea, but was excited to bring his love of food, community and entrepreneurship together with Southern Steer Butcher. “Once the sales started coming in, I felt justified in leaving a secure, good-paying job to launch a new business,” he says.

But it wasn’t just about the money for Snyder. He also wanted to make an impact by giving back and has launched several initiatives to help others through the business. Southern Steer quickly became a community favorite and developed a loyal following. It was recently awarded the People’s Award for Best Meat Market by the Tampa Bay Times.

As Southern Steer took off, Snyder and his team developed more and more ways to innovate, streamline processes and become more profitable. Along with franchise expert Jack Lapointe, Snyder launched the butcher shop franchise in June 2020. Lapointe saw a ton of potential in Southern Steer. “It doesn’t have the typical issues that come with most food franchises. It makes money and has family-friendly hours,” Lapointe says. “The time is right for Southern Steer. More people are cooking at home these days and want to know where their food comes from.”

While 85% of the business is driven by meat sales, additional income comes from classes and retail offerings. Lapointe believes that soon enough, there will be a Southern Steer on every neighborhood corner. “After all, everyone wants to know their local butcher,” he says.

The U.S. has the world’s largest meat market, valued at $95 billion, according to IndexBox. The industry employs over a million workers to meet the demand of the average American consumer, who eats an estimated 200 pounds annually. The four main kinds of meat consumed in the U.S. are beef, pork, chicken, and turkey. IBISWorld reports that in the past five years, the market size of the U.S. meat markets industry increased faster than the economy overall.