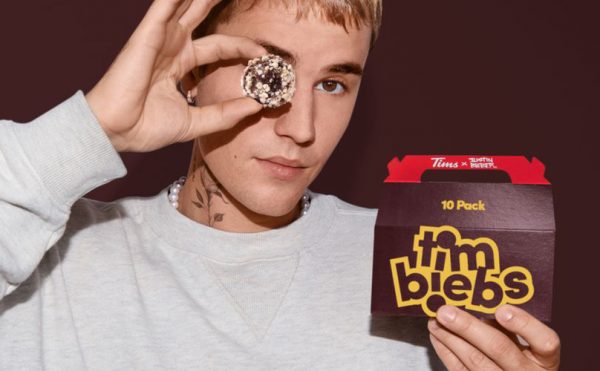 Pop singing sensation Justin Bieber says Timbits doughnut holes are his go-to treat when he visits Tim Hortons restaurants, and the franchise rode that pronouncement to a hugely successful marketing drive starting last November. The Canada-concentrated franchise, owned by Restaurant Brands International, credited Bieber’s special Timbiebs doughnut holes with prompting a 10.3% uptick in fourth-quarter sales, according to a Wall Street Journal report.  Last year, the stores had a sales decline of 11% for that period.

“Doing a Tim Hortons collab has always been a dream of mine,” Bieber said of the campaign. “I grew up on Tim Hortons, and it’s always been something close to my heart.” Bieber, a Canada native who has some 220 million social media followers, promoted the specially named doughnut holes on Instagram and chose the three flavors that would be sold: chocolate white fudge, sour cream chocolate chip and birthday cake waffle. The recipes were developed with Tallis Voakes, director of culinary innovation for the franchise, qsrmagazine.com reported.

“I’m a Belieber,” Restaurant Brands CEO José Cil recently told Wall Street analysts; the term is the nickname of the singers’ super-fans. Cil said the marketing campaign with Bieber will continue with new initiatives, but disclosed no further information about what’s in the cards. The restaurant franchise, best-known for its doughnuts and coffee, hopes Bieber’s support will boost its expansion ambitions in the United States, Inc.com reported.  (Restaurant Brands International also owns Burger King and Popeyes Louisiana Kitchen.)

National Hockey League players typically have been used for Tim Hortons’ celebrity endorsements, but the switch over to Bieber – a move that aimed to woo Gen-Z customers – worked beautifully, according to an assessment on Inc.com. Its article further points out that the singer’s fan base would be a cinch to sample the decadent treats and widen the market of the prevalent restaurant franchise brand. Inc.com also praised the campaign for simultaneously selling limited-edition merchandise, including fanny packs, hats and tote bags emblazoned with the Timbiebs logo. The market for those turned out to be sizzling-hot.

Hope Bagozzi, chief marketing officer for Tim Hortons, told qsrmagazine.com that her company is extremely pleased that Bieber is fully committed to the partnership. “He has an authentic, lifelong relationship with Tims, and he was so invested in working on Timbiebs and our future plans together,” Bagozzi said. “He knows exactly what our guests already love about the Tims brand, and he’s helping us deliver new menu innovations that we know they’re going to love. We’re really looking forward to what’s next.”

Part of Bieber’s promotional tasks included shooting a TV commercial.  In it, the 27-year-old singer ponders various potential Timbits flavors with a Tim Hortons employee, People.com reported. A few of his suggestions, such as apple banana and apricot latte, ended up not making the cut. But Cil and Bagozzi have said there will be more collaboration with Bieber in the future, so perhaps those flavors will be in the stars before too long.

What Food Franchises Does Shaquille O’Neal Own? 34808

Why is Chick-fil-A Better Than McDonald’s? 5675