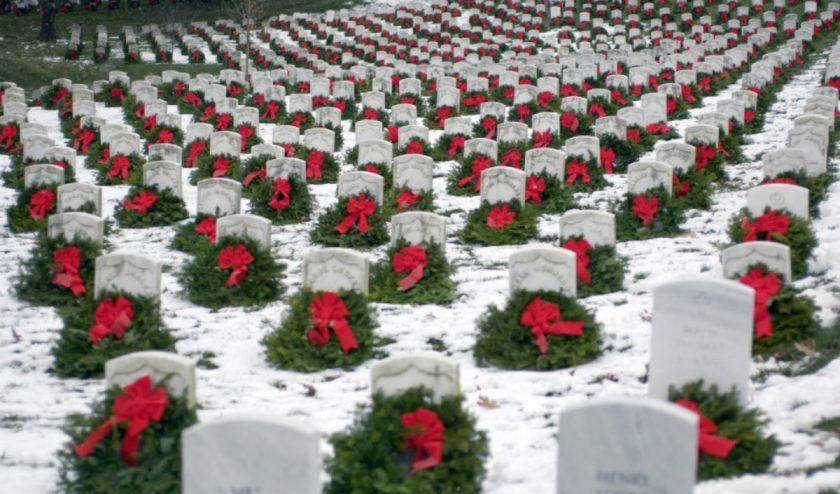 Sub franchise will match up to $500,000 in donations for wreaths on veterans’ graves

Jersey Mike’s Subs and Mission BBQ have launched fundraising campaigns in support of Wreaths Across America. The nonprofit organization honors U.S. military veterans by laying wreaths on their gravesites. Wreaths will be placed at more than 2,800 participating locations, including Arlington National Cemetery, in all 50 states and abroad on Saturday Dec. 18.

From now through Nov. 30, Jersey Mike’s will match each $15 wreath sponsorship made up to a maximum of $500,000. This month the sub franchise increased its matching total from its previous cap of $300,000.

In mid-November, Mission BBQ began its American Heroes Cup drive to raise money for wreaths that will be set on veterans’ graves in December 2022. For each of the $3.99 American Heroes Cups purchased at the barbecue chain’s 110 restaurants from now through Dec. 31 of this year, the company will make a $2 contribution to Wreaths Across America. Last year, Mission BBQ raised $362,320 for wreaths that will be placed on graves this Dec. 18.

In announcing Jersey Mike’s increased financial assistance, Peter Cancro, the sub shop’s founder and CEO, said that placing a wreath “is truly meaningful” and emphasized the importance of teaching  “our children the value of freedom.” Cancro added that his 65-year-old company “is honored to be part of Wreaths Across America.”

Since 2012, Jersey Mike’s has raised more than $2.5 million to aid the efforts of Wreaths Across America, according to a news release from the nonprofit organization. Jersey Mike’s franchisees support the military and their families all year round through diverse programs.

Mission BBQ also gives back to veterans in many ways. Said Bill Kraus, co-founder of Mission BBQ: “We owe everything to our nation’s veterans, who have risked all that a person can to defend and protect this country. It’s an honor to provide support to Wreaths Across America in remembering the fallen and thanking military families for their sacrifices.”

Kraus and Steve Newton opened the first Mission BBQ restaurant in 2011 on the 10th anniversary of the Sept. 11 terror attacks. The restaurant’s heroes cups are available year-round, always with $2 of each purchase set aside to benefit various veterans’ and first-responders’ aid organizations in addition to Wreaths Across America.

Karen Worcester, executive director of Wreaths Across America, thanked both restaurant groups for their generosity in two news releases. “Remember the fallen, honor those who serve, and teach our children about the cost and value of freedom — that is our yearlong mission. The veterans we honor committed themselves unselfishly at the most critical moments in our nation’s history. The generous support of the wonderful people at Jersey Mike’s ensures that we will be able to fulfill our mission in remembrance of these brave men and women.” In thanking the barbecue restaurant, a news release quoted her as saying “Mission BBQ demonstrates this mission in how they conduct business in the communities they serve.”

Wreaths Across America was established to expand the annual wreath-laying ceremony at Arlington National Cemetery that Maine entrepreneur Morrill Worcester launched in 1992. In 2020, 1.7 million wreaths were placed in honor of veterans nationally and abroad, according to the nonprofit organization.

What Food Franchises Does Shaquille O’Neal Own? 34961